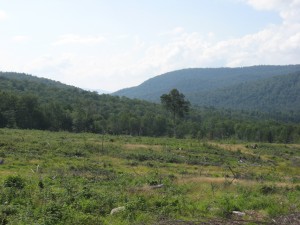 Can the discussion of the future of the Park’s commercial timberlands move beyond a fight over clear-cutting? (Photo: Lyme Timber)

There’s universal agreement that the Adirondack Park’s commercial forests are a vital part of the region’s tapestry.

The million or so acres of private timberland serve a wide variety of functions, providing jobs, allowing recreation, sustaining wildlife habitat, and serving as open space “connective tissue” between stands of forest preserve.

But there’s also a growing consensus that big chunks of the Park’s commercial forest is in terrible shape.

“If you see a “for sale” sign on a log landing, that forest most of the time has been high-graded and they’ve cut the value out and left a low quality forest,” says Sean Ross.

He’s director of forestry operations with Lyme Timber, which owns a quarter million acres of commercial forest in the Park.

That view is shared by environmentalists like Peter Bauer with Protect the Adirondacks.

“One of the things we heard at the meetings, is the large landowners say, ‘Look, we’re stuck with a forest that has been hit hard and hit continuously for the last 150 years’” Bauer said.

“And frankly in the words of the foresters they’re left with ‘junk’ forests and they just need to start over.”

In theory, this is a challenge that lies directly on the doorstep of state regulators, including the Adirondack Park Agency and the Department of Environmental Conservation.

A big part of the reason those agencies exist is to watchdog timber harvests on private forest lands.

But the APA and DEC haven’t reformed their regulations in significant ways in decades.  And they’ve also failed to gather basic data about the health of the forests.

How much clear-cutting is going on?  No one knows.

How have dramatic changes in the timber markets and in ownership patterns for hundreds of thousands of acres of Adirondack forest affected harvesting standards?  It’s a mystery.

Environmental groups, meanwhile, have seized for the most part on the narrow question of clear-cutting as a rallying point, energizing their memberships without offering much in the way of nuanced thinking about how forests can or should be managed.

In the past regulatory reform has been so controversial, so risky for all the parties involved, that problems have been ignored and solutions deferred.

The problem is exacerbated by the fact that the Park’s timber industry is being steadily concentrated on smaller and smaller chunks of forest, as more timberland is either developed for real estate, or acquired for the state forest preserve.

In other words, we need the remaining timber stands to be incredibly well managed, if they are to carry a big environmental and economic load.

So far, we don’t have many answers.  What we do have is a clear — and fairly universal — sense that this is a problem that needs addressing soon.

“All you have to do is look at the stands throughout the Park and you find that poor genetic stock was left [and] you have a reduction in maple,” says Ross Whaley, former APA chairman and the former head of the SUNY college of environmental science and forestry, who now represents the Adirondack Landowners Association.

“So if you look at that history, it looks to me like we’ve been practicing bad forest management here.”

How do we change that — and soon?  Comments welcome below. 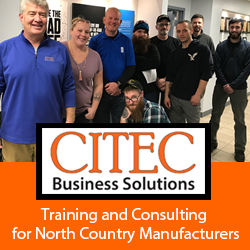 29 Comments on “Who will save the Adirondack Park’s timberlands?”