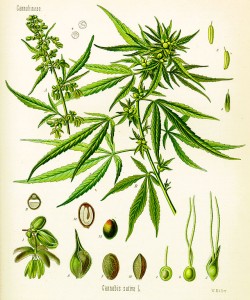 Cannabis as illustrated in Kohler’s book of medicinal plants from 1897. Source: Wikipedia

What to do about marijuana – medical or otherwise – seems to be a hot topic just now.

The New York Times is running coordinated editorials and background articles positioned to bolster a catchy summary: “Repeal prohibition, again” The editorial board of the Times concludes that criminalizing marijuana hasn’t worked and doesn’t make sense.

Canada recently overhauled national policy relating to medical marijuana in favor of regulated sales from government-approved facilities to persons with “valid Authorizations to Possess.” Indeed, a supplier is growing pot right now in the former Hershey’s Chocolate facility in Smiths Falls Ontario. NCPR’s Sarah Harris produced this first-hand look back in February when she toured the Tweed facility.

According to the Ottawa Citizen’s James Bagnall, Tweed’s Chief Financial Officer thinks the medical marijuana industry is on the cusp of the type of huge, rapid growth seen in the heady days of the high tech boom.

Health Canada is reportedly dealing with an avalanche of applications to produce medical marijuana. Meanwhile doctors are expressing ill-ease with the role of gate-keeping who can have a prescription for the drug, along with other concerns. Speaking to the Ottawa Citizen, Dr. Danial Schecter, a doctor who runs a Toronto clinic that assesses patients for cannabis prescriptions estimated that:

…about 10 per cent of doctors are comfortable prescribing marijuana; 10 per cent are against it; and 80 per cent are interested but lack the education they need to make an informed decision.

Some doctors may be concerned that they are jumping on a “marijuana bandwagon,” he said, in light of mistakes made in the past: For example, the liberal prescription of OxyContin, an addictive opioid drug.

“The medical establishment is a bit scared we’re going to make the same mistakes,”

In the midst of questions, confusion and change, medical marijuana may or may not be some sort of “next big thing” in Canada, but where does that leave recreational marijuana? In flux, just as in the U.S.

As reported by Mark Kennedy for the Ottawa Citizen, a recent opinion poll commissioned by the ruling Conservative Party produced these statistics:

— 37.3 per cent say marijuana should be legalized;

— 33.4 per cent say possession of small amounts of marijuana should be decriminalized with a fine rather than a criminal record;

— Just 13.7 per cent say the country’s marijuana laws should stay the same;

— 12 per cent said marijuana penalties should be increased.

Positions on marijuana may be an issue in the next federal election slated for 2015. Liberal Leader Justin Trudeau got out in front of the “do you inhale?” question by stating he’s had the occasional toke in social settings, even after being elected to Parliament. The Liberal Party is on record as wanting to consider legalization or decriminalization of marijuana.

Canada’s most famous marijuana advocate (some would say martyr) Marc Emery was sentenced in 2010 to 5 years (less time served while awaiting trial) for running a seed-selling company in Canada. Emery’s impending release will return the long-time marijuana advocate to what the CBC describes as an entirely new landscape:

The 56-year-old Vancouver resident was extradited to Seattle in May 2010, when he pleaded guilty to selling marijuana seeds from Canada to American customers before serving his time in several U.S. corrections’ facilities.

When he was first arrested almost a decade ago, the Drug Enforcement Agency heralded his seizure as a “significant blow” to the legalization movement. 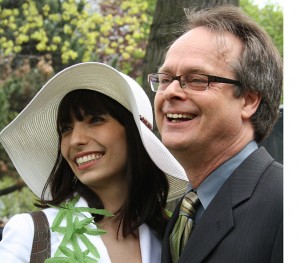 Never one to mince words, Emery told the CBC what he plans to once he’s back in Canada, presumably in August.

“My own government betrayed me and I’m going to wreak an appropriate amount of political revenge when I get home and campaign against the Conservative government,” Emery said.

“The whole thing is nonsense. I should never have been turned over to the U.S. government,” said the fervent Liberal supporter, already fired up for next year’s general election.

Emery is something of a loose cannon, so his embrace of the Liberal Party has been one-sided thus far. But he’s still a potent symbol: years of jail time for selling seeds of a simple plant that’s starting to lose notoriety.

It’s hard to be among the last casualties in a fight that may end without victory for the stated cause. And it remains to be seen if there’s enough consensus in the U.S. and Canada to remove marijuana from any larger war on drugs. Still, there’s more change than usual blowing in this particular wind.

18 Comments on “Marijuana debate heats up in U.S. and Canada”