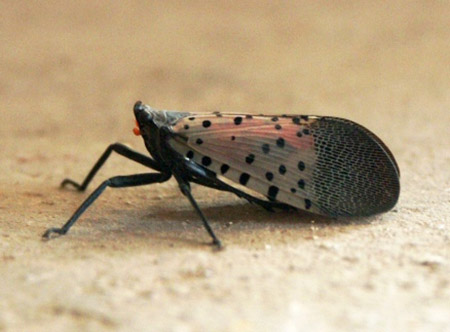 Chinese lanterns, bright and cheery, can lend a festive air to an evening out on the patio. As far as I know they are harmless. Chinese spotted lanternflies are also bold and colorful, but they do cause harm, and a lot of it.

Spotted lanternflies were unknown in North America until 2014 when they showed up in Pennsylvania on a shipment of stone from China. Who knew the Keystone State was that short on rocks? Had we been aware of this deficit, we could have sent North Country rocks down there and saved a lot of grief.

If only it were a laughing matter. The spotted lanternfly (SLF) is a significant pest of numerous tree species, including pine, as well as of grapes, tree fruits, and non-woody plants. In short, just about anything green. Should it spread, it represents a serious threat to many agricultural crops.

Prolific breeders, SLF females lay yellowish-brown (later turning gray), foam-like egg masses similar to those of the gypsy moth. This is probably how they stowed away on that pallet of stone. The juveniles or nymphs look nothing like the adults. Black with white spots, they molt several times before they mature, and become red in the last phase of their “childhood.”

Its name can be confusing since the adult closely resembles a moth, yet it’s called a fly. But it’s not even a fly. It is a hemiptera, related to walking stick bugs and giant water beetles. Like all hemipteras, spotted lanternflies have piercing mouthparts, and they use these to great effect to drain sap from plant tissue.

While some of the worst invasive pests such as Asian longhorn beetles and emerald ash borers have harmless native doppelgangers, the lanternfly is nearly impossible to confuse with any other insect. Here is a USDA description:

If you’ve heard of tree-of-heaven or ailanthus, you know it’s an invasive weed-tree from Asia that is so bad it makes boxelder look desirable (if you can believe that). Unfortunately for us, lanternflies attack ailanthus before any other species. One would think this is a good thing—an invasive pest takes out an invasive plant—problem solved.

I say unfortunately because SLF will feed on a tremendous range of hosts when it runs out of its favorite food. Since ailanthus does not grow in New York’s northern tier, at least to our knowledge, the lantern fly would move right to desirable species without first showing up on tree-of-heaven. We wish it preferred tag-alders, something we have in abundance.

Where ailanthus grows, it can serve as a sort of early-warning device since that’s where SLF will show up first. In addition, it may be possible to use the trees to fight SLF. Infested ailanthus could be treated with a systemic product that would kill insects that feed on it.

For obvious reasons, Penn State entomologists have taken the lead in researching SLF, and are working in conjunction with federal and Pennsylvania State Departments of Agriculture. Among other things they want to find its natural enemies, be they predators, parasitoids, or diseases. Although a parasitic wasp from China holds promise as a natural control agent, its release here is a long way off, possibly over a decade.

The message, of course, is that we need to keep SLF out of the area. To do this we need to spread the word about SLC and how to identify it. Citizen-science projects will be invaluable. Spotted lanternflies don’t fly far, but they can travel by way of their egg masses, which the female SLF lays on any smooth surface. Eggs are laid well into the late fall, and although the masses are brownish when fresh, they darken over time and become harder to see.

If you know of any recent visitors to Berks, Bucks, Chester, Lehigh, or Montgomery Counties in Pennsylvania, encourage them to thoroughly inspect their vehicle as well as any items they may have picked up or bought while away.

For accurate and up-to-date information on the spotted lanternfly, go to one of these websites:
http://extension.psu.edu/pests/spotted-lanternfly or
https://www.aphis.usda.gov/publications/plant_health/2014/alert_spotted_lanternfly.pdf or
http://www.agriculture.pa.gov/Protect/PlantIndustry/spotted_lanternfly/Pages/default.aspx#.VkYdA0iPsaU

Anyone who thinks they may have found a spotted lanternfly or an egg mass should immediately contact their local New York State Department of Environmental Conservation or Cornell Cooperative Extension office.