When it comes to education in Flanders, the Dutch speaking part of Belgium, there are many differences the North Country. I will talk about Flanders because the systems in the French part are lightly different from ours.

Let’s start our guide to Flanders education with the different schools. Flanders has Catholic schools or GO-schools. A GO-school means that the school is not based on one religion. Now that you know this, let us start with kindergarten.

Kindergarten & primary
We attend kindergarten at the age of two-and-a-half or three. The first step is called ‘instap’ which is a walk-in class. Children are not obligated to take this class, but it helps them to adjust easier to the school life. Life is not too serious yet in this class. The teacher reads stories and does crafts with them. Some children will attend only half a day, other children might nap at school. The first official year of kindergarten is more serious. Children are supposed to learn skills by playing and they will get more instruction. From this point on, school is mandatory. There are no more naps or going home after half a day. Children spend three years in Kindergarten and can actually fail and be forced to re-do a year if they are not making enough progress. 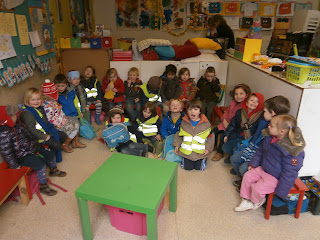 At the age of six, children transfer to primary school. We sometimes say that they are now attending the”real school,” because the next six years is less playing, more learning. They learn to write, count, speak, read and much more. At the end, they are supposed to be ready to go to high school. They also receive education in religion. In Catholic schools, children pray every day in the morning while GO-schools offers education classes once or twice a week. They can choose among many religions or a non-religion class. Catholic children have their communion and their confirmation. Atheists can also take part, what we would call the Lentefeest, which means literally spring festival. This is so children who are sharing a class with catholic children are not left out. Primary school and kindergarten start at 8:30 am and ends at 3:30 in the afternoon. On Wednesday, they only have to attend half a day.

High school
While primary school is not as serious, life at high school can be pretty stressful. A difference with the US is that we start counting over. The first year of high school is called first grade again. High school education consists of six or seven years of education, starting from the age of 12.

High schools in Flanders do not offer sports, debate or any other teams. School is mostly focused on education, so students spend their time at school learning. High school starts at 8:30 in the morning and ends sometimes at 3:30 or around 4:20 in the afternoon. Wednesday is a half day. Some schools might have an uniform, but they are very rare.

There are four types of education in Flanders, and the types might be different for each high school. Currently ASO is the highest-ranked education in Flanders, but the government is considering getting rid of the ranks and treat all types as equal. The problem with our current ranking is that students who start at a lower rank can not do to a higher rank without re-doing a year of high school.  The first type is called general education (ASO), which offers a very broad general education. From the second year of high school students can choose to major in economics, Latin, languages, mathematics, sports or sciences.

The third type is called vocational education (BSO), which offers very practical courses. These students have a seventh year of high school, also known as a specialization year. Also they have a very wide variety of courses like child care, construction, hair dresser, elderly care, etc. Students who graduate in BSO are supposed to be ready for the world of work without further education. They get less of the general courses like languages and mathematics, but more practical courses to prepare them.

The fourth type is art education (KSO), which offers arts and performance.

University or college
After graduating high school, students can attend university or college. Universities offer academic bachelors degrees, while a college  offers professional bachelors degrees. That means that a college teaches you practical skills and some theory, while university is only theoretical. We do not have to apply for college. You just go and enroll yourself in their classes. Some courses at university have an exam to see if you’re prepared for the courses. This way they eliminate weak students. Our universities are Catholic or secular, although non-Catholic students can attend a Catholic one.

We do not live on campus because our campuses are located in the middle of the cities. So we do not have our own little university village. Most of the campuses offer cheap meals in a restaurant, mostly on one of the campuses. Students who live too far away from home can rent a cheap room to live in during their education. Most of them go home on the weekend, because Belgium is very small.

There are no sports or other non-academic teams at university, but we do have something similar to Greek life, which we call student social clubs. In my first year at college, I became part of Educata. They hosted a freshmen weekend. If you decided to became a member, you were called a schacht, which means not worth much. You get initiated and after a year, you will have to do some tasks for them, so you can become an official member. They host many fun activities during the year. One of the most famous one is called a Cantus, a event where students gather, drink and sing songs. The video is an example of a big one, organized by many organizations.

But our educational life is mostly focused on learning and less on fun and sports, which I would call a bad thing. We are ranked as one of the best educated students in the world, but we are also known as somewhat reluctant students. I believe that is because it is a habit of going to school for many hours a day, without having fun activities.

And the last thing I want to talk about is scholarships. Students in kindergarten, primary, secondary or college can apply for a scholarship, offered by the Flemish department of education. The tuition for those students is lower in price and some of them might even receive some extra financial aid. Universities can also offer extra aid where necessary. Students in Belgium do not have loans to pay off, because education is way cheaper.