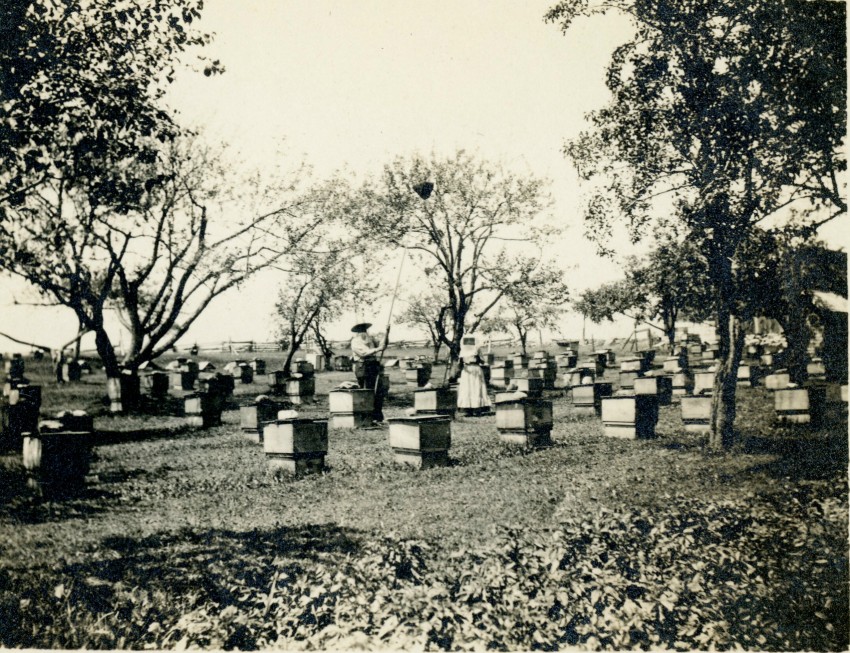 Edgar and Eliza Elethorp working with their bees on The Elethorp Farm, circa 1900. Photo courtesy of The Hammond Museum.

During our first North Country at Work photo-scanning session, graciously hosted by The Hammond Museum, we came across tales of a prominent Hammond beekeeper, Edgar Elethrop, and of The Elethorp Bee Farm. Edgar Elethorp kept bees and commercially sold honey from 1879 until his death in 1932. Here is a history of that work, as recounted by his son Robert and his  granddaughter Arvilla E. Long.

Like all other crops the weather had a lot to do with the flow of honey. Our honey came mostly from basswood and clover; if the wind went north it would stop the honey flow. Some years would be very light, with hardly enough to carry the bees through the winter. Other years there would be a very heavy flow. The bee-yard was across the road from the farm house, in a small orchard. Grandpa had about 250 to 300 colonies. Some years at the end of the season he might build up to 400 colonies. He would usually sell the extra colonies to others beekeepers. His average honey yield was about 20,000 to 25,000 pounds. The highest yield he ever had was 42,000 pounds. The fancy comb honey crop was sold to the same buyer in New York City for over twenty-five years.

By the time the harvesting and corn cutting was finished in the fall it was time to get the bees ready for winter. The hives all had to be weighed. A hive of bees would need about twenty pounds of honey to winter on – the normal hive of bees plus the honey would weigh approximately sixty pounds. The bees couldn’t be moved until it was quite a cold day, as this would prevent them from trying to fly. Dad and a hired hand would carry the bees on a hand-barrow (which they called a go-devil). They would carry three hives at a time. Grandpa would plug each hive until they were placed in the cellar, then the plug was removed. The hives were placed about 12 inches off the floor and three or four hives high. Grandpa was one of the first beekeepers in the area to winter bees in this manner. Other beekeepers came to find out the procedure as he had fewer losses of bees than those who wintered them outside. 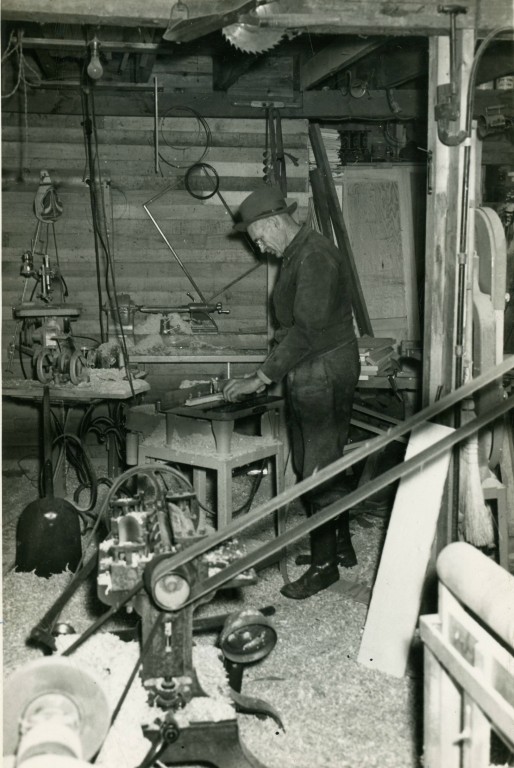 Robert Elethorp, Edgar Elethorp’s son, working in the barn of The Elethorp Bee Farm. Photo courtesy of The Hammond Museum.

The Elethorp Bee Farm was established by my father, Edgar Elethorp, who was a native of Depeyster. As a young man, he became interested in apiculture due to the fact that a Mr. Harber of Canton, New York moved a few colonies of bees near his home. He spent as much time as he was able and learned all that he could; this was in the late 1870s, and there was plenty left to learn about methods of modern beekeeping. It was at about this time that the bee smoker and manufactured foundation was beginning to be used.

He purchased a few colonies from Mr. Barber and about 1879 he moved his apiary from Depeyster to Morristown on the Gilford Nicol farm, where he continued to enlarge the business and was there until 1882 when he met and married Eliza Berley of Macomb. They established their home and business in Macomb and by thrift and knowledge gained in the business, was able to make a paying livelihood. In the autumn of 1895, they purchased the farm of Frank Zeller, one mile north of Hammond on Route 37, where the business was continued until Mr. Elethorp passed away in 1932.

He had been very active in all phases of beekeeping. In local organizations, was president of the New York State Honey Producers Association and was active on many committees and attended many meetings in other states. He was well known among the bee keeping fraternities. It may be well to mention that as an achievement in 1902, he set a record averaging 190 lbs of honey per colony, all comb honey. It is also interesting to note that all the colonies were contained in one yard which would be unusual today.

Mr. Elethorp was frugal in his habits, and did not believe in buying what he could make and about 1885 he purchased a foundation mill which was very new at the time and he made his own bees wax foundation. After a few failures he perfected it and for many years manufactured the product for local and many northern bee keepers. After moving to Hammond he made most of his supplies.

When Mr.Elethorp started in apiculture very few books were printed on the subject so all that was to be learned had to be from experience. That experience he got and added to it, and in later years his advice was sought by many in the business.