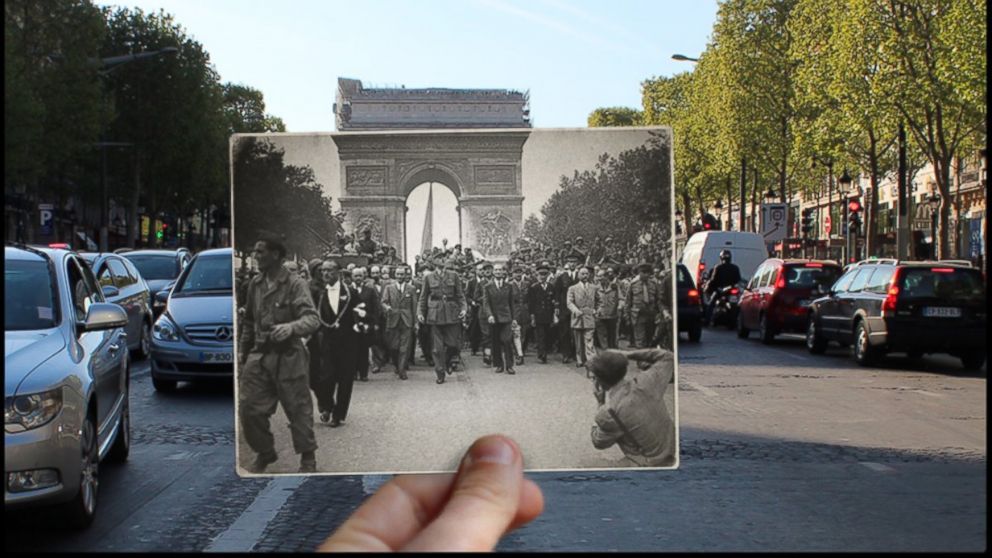 This month’s collection of suggested reading from area librarians takes on an international flavor.  As Rebecca Donnelly, the Norwood librarian who organizes this list, wrote: “I asked our librarians for titles set outside the U.S. Lots of responses!”

By the way, Rebecca has just published a YA novel–you can listen to Todd Moe’s conversation with her about the book here.

The latest installment in the Commissario Guido Brunetti mystery series. Taking place in Venice, Italy, the mysteries themselves can sometimes be thin; however, Leon paints a fascinating picture of the Italian way of life in this unique city of canals.  Caution:  after reading a few  you will want to hop a plane and ride a vaporetto through the canals yourself.  Recommended by Dorothy Dineen, Mexico Public Library. 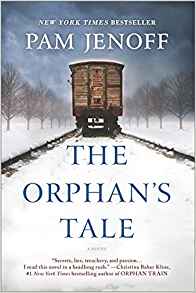 “Sixteen-year-old Noa has been cast out in disgrace after becoming pregnant by a Nazi soldier and being forced to give up her baby. She lives above a small rail station, which she cleans in order to earn her keep. When Noa discovers a boxcar containing dozens of Jewish infants bound for a concentration camp, she is reminded of the child that was taken from her. And in a moment that will change the course of her life, she snatches one of the babies and flees into the snowy night. Noa finds refuge with a German circus, but she must learn the flying trapeze act so she can blend in undetected, spurning the resentment of the lead aerialist, Astrid. At first rivals, Noa and Astrid soon forge a powerful bond. But as the facade that protects them proves increasingly tenuous, Noa and Astrid must decide whether their friendship is enough to save one another–or if the secrets that burn between them will destroy everything.”

City of the Lost begins with Casey Duncan, an ex-homicide detective, moving to secret town in Canada’s remote Yukon. She is escaping her past life, and hoping for find a community of like-minded individuals. What she finds, however, is that crime is just as plentiful in the wilderness. As the newly hired detective on site, she works with the police chief to solve the latest murder, while adapting to an off-the-grid life in the self-sufficient town of Rockton.  An Absolute Darkness continues the series as Casey and her fellow police officers investigate the abduction and subsequent killing of young women in their remote community while battling frigid temperatures, a blizzard, and threats from outside the town’s borders. Kelley Armstrong is a Canadian author who has written several series for both teens and adults. 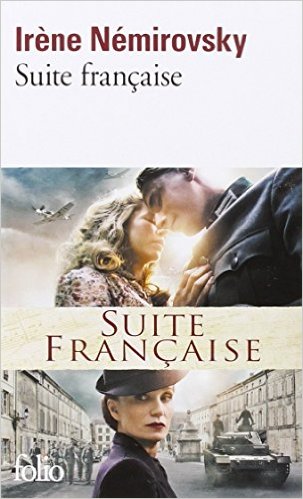 Beginning in Paris on the eve of the Nazi occupation in 1940. Suite Française tells the remarkable story of men and women thrown together in circumstances beyond their control. As Parisians flee the city, human folly surfaces in every imaginable way: a wealthy mother searches for sweets in a town without food; a couple is terrified at the thought of losing their jobs, even as their world begins to fall apart. Moving on to a provincial village now occupied by German soldiers, the locals must learn to coexist with the enemy – in their town, their homes, even in their hearts.

Note: When Irène Némirovsky began working on Suite Française, she was already a highly successful writer living in Paris. But she was also a Jew, and in 1942 she was arrested and deported to Auschwitz, where she died. For sixty-four years, this novel remained hidden and unknown.

City of Thieves is set in Russia during World War II. While the inhabitants of the Leningrad are starving, Lev and Koyla, two unlikely companions, are given a quest to find a dozen eggs by a colonel for his daughter’s wedding cake. The friendship that develops between Lev and Koyla is what makes this novel wonderful. One is pragmatic; the other idealistic. One is a patriot; the other quietly rebellious against his government. They bond through a series of adventures and narrow escapes. City of Thieves is filled with tragedy, but also some comedy and even a little romance.

Set in Toronto, this elegant mystery follows Inspector Esa Khattak and his partner Rachel Getty as they investigate the circumstances surrounding a man’s fall to his death. Rachel wonders why the community policing unit charged with investigated sensitive crimes in minority communities should be concerned with the death of Christopher Drayton–until Khattak reveals that Drayton may in fact have been a Bosnian war criminal wanted for crimes against humanity in the Srebrenica genocide.

In 2002, the author, a marine biologist, was visiting Thailand with her fiance when he was stung by a box jellyfish.  He died immediately.  Alone in a foreign country and grieving, Fowler rebuilt her life through travel and friendship.  Part travel memoir, part treatise on loss, this book will resonate with anyone who has lost a loved one and made the journey back from grief.  In sharing her travel experiences, Fowler makes the reader feel as if they’re visiting the far-flung destinations with her.  There’s no happy ending here, no feel-good sentiments, just honesty.

When New Yorker writer Lauren Collins moves to London, she falls in love with a Frenchman, Olivier. Collins begins to consider what it means to love in a second language as their relationship develops entirely in English. Eventually, Collins moves to Geneva with Olivier as a newlywed. As she  considers and worries she will never be able to truly understand her (future) bilingual children, Collins decides to learn French. This fantastic and brief memoir is full of rich description, humor, and a lot of heart.

Set in prewar Indochina, where Duras spent her childhood, “The Lover” is a despairing, sensuous novel about an affair between a 15-year-old French girl and a 27-year-old Chinese man. The consuming infatuation and brutal shifts of power between the lovers echo many issues of modern colonialism. 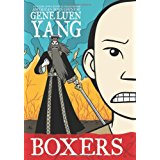 This two-part graphic novel series tells the story of the 1898 Boxer Rebellion in China from two points of view. In Boxers, bands of foreign missionaries and soldiers roam the countryside, bullying and robbing Chinese peasants. Little Bao has had enough. Harnessing the powers of ancient Chinese gods, he recruits an army of Boxers–commoners trained in kung fu–who fight to free China from “foreign devils.” Against all odds, this grass-roots rebellion is violently successful. But nothing is simple. Little Bao is fighting for the glory of China, but at what cost? So many are dying, including thousands of “secondary devils” – Chinese citizens who have converted to Christianity. 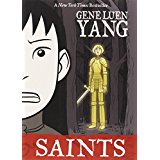 In Saints, an unwanted fourth daughter, Four-Girl isn’t even given a proper name by her family. She finds friendship and a name, Vibiana in the most unlikely of places: Christianity. But China is a dangerous place for Christians. The Boxer Rebellion is murdering Westerners and Chinese Christians alike. Torn between her nation and her Christian friends, Vibiana will have to decide where her true loyalties lie … and whether she is willing to die for her faith.

Salt to the Sea is a historical fiction young adult novel by. It tells the story of four individuals in World War II who make their way to the ill-fated MV Wilhelm Gustloff.

The Diary of Ma Yan: The Struggles and Hopes of a Chinese School Girl, Pierre Haski (editor/publisher) (2005)

The Diary of Ma Yan: The Struggles and Hopes of a Chinese School Girl is the diary of Chinese schoolgirl Ma Yan, edited and published in the West by French journalist Pierre Haski. 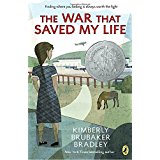 The War That Saved My Life, Kimberly Brubaker Bradley (2015)

Nine-year-old Ada has never left her one-room apartment. Her mother is too humiliated by Ada’s twisted foot to let her outside. So when her little brother Jamie is shipped out of London to escape the war, Ada doesn’t waste a minute — she sneaks out to join him. So begins a new adventure of Ada, and for Susan Smith, the woman who is forced to take the two kids in. As Ada teaches herself to ride a pony, learns to read, and watches for German spies, she begins to trust Susan, and Susan begins to love Ada and Jamie. But in the end, will their bond be enough to hold them together through wartime? Or will Ada and her brother fall back into the cruel hands of their mother?

What I enjoy most about reading is watching relationships grow as the story progresses. This book is all about relationships–between a brother and a sister, between a woman and a girl, and between a caregiver and children. The moving story teaches readers about family bonds and hope for a better future.

In modern-day Afghanistan, 10-year-old Obayda is a bacha posh, a girl dressed as a boy. She has more freedom than she would as a girl, and makes a good friend of another bacha posh, but must find a way to remain free when she returns to life as a girl. Recommended by Rebecca Donnelly, Norwood Public Library.

Arresting, beautiful, enlightening and infinitely human, this is a collection of full-page photos of families around the world surrounded by what they eat in a single week — from Bhutan to San Antonio. Read the illuminating statistics and the essays. This is a book for the family and for the classroom. You won’t see the same old “aren’t we better than them” attitude, nor will you be shamed. This book reminds us that what we eat is the simplest, yet most profound, thread that ties us together. 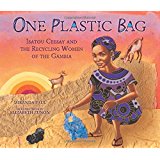 One Plastic Bag: Isatou Ceesay and the Recycling Women of the Gambia, Miranda Paul, illustrated by Elizabeth Zunon (2015)

Plastic bags are cheap and easy to use. But what happens when a bag breaks or is no longer needed? In Njau, Gambia, people simply dropped the bags and went on their way. One plastic bag became two. Then ten. Then a hundred. the bags accumulated in ugly heaps alongside roads. Water pooled in them, bringing mosquitoes and disease. Some bags were burned, leaving behind a terrible smell. Some were buried, but they strangled gardens. They killed livestock that tried to eat them. Something had to change. Isatou Ceesay was that change. She found a way to recycle the bags and transform her community. This inspirational true story shows how one person’s actions really can make a difference in our world.

5 Comments on “Recommended reading: April in Paris – or the Yukon or Venice or…”