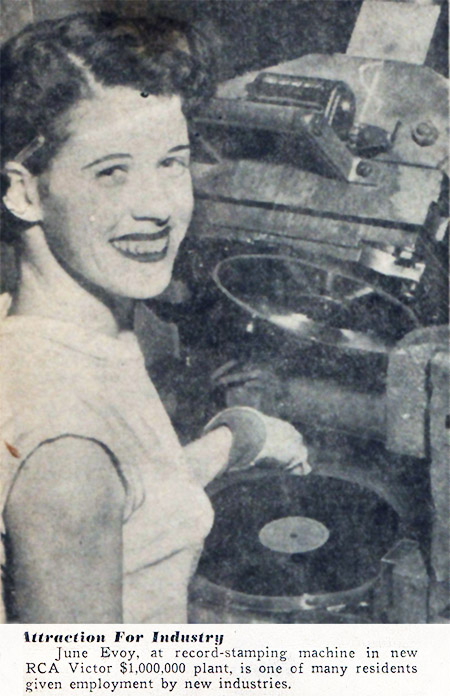 RCA, the Radio Corporation of America, is one of those iconic brands that was a cornerstone of the golden age of television and radio. We’ve all seen the old RCA logo of the dog sitting in front of the phonograph with the slogan “His Master’s Voice.”

RCA operated a major vinyl record pressing plant in Smiths Falls, Ontario for many years, and a factory that made televisions in Prescott, Ontario.

RCA opened the Smiths Falls plant in 1954. The town supplied a competent workforce and good location between Montreal and Toronto, not far from the U.S. border. The Canadian National and Canadian Pacific Railways both pass through, making it a good place to easily press out the hits that were in demand by baby boomers.

125 people worked at RCA in Smiths Falls on a single shift in 1954. There were 350 people on staff and three shifts by the mid-1970s. Even though it was an RCA facility, it pressed records under contract for all major record labels.

In 1963, the first Beatles album for the North American market was pressed by RCA in Smiths Falls. It was only released in Canada and was called Beatlemania! With the Beatles. Several Elvis Presley records were pressed in Smiths Falls, along with Diana Ross and the Supremes, the Jimi Hendrix Experience, Crosby, Stills, Nash, and Young, and Led Zeppelin.

Picture discs–records that had photos of the artist printed right on the record, were popular in the 1960s and 1970s. The RCA plant in Smiths Falls pressed thousands of them.

RCA Victor closed the Smiths Falls pressing plant in 1978. Today, the plant site is a complex of medical and government offices.

Television was entering its boom years in 1953. Manufacturers and retailers were having a hard time keeping up with demand for sets. The Canadian Broadcasting Corporation began its TV network the previous year. RCA opened a television assembly plant in the St. Lawrence River town of Prescott. It was a good location for a factory, too, between Montreal, Toronto and Ottawa. All of those cities were growing in the 1950s with lots of people who had the money to buy a new TV set. 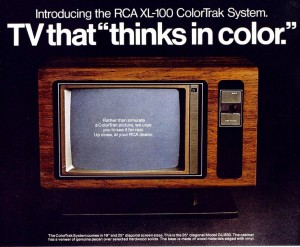 The CN Railway passes through Prescott, and in the 1950s, the St. Lawrence Seaway and Highway 401 were being built through the town. Those things all made it easy to get products to eager customers.

RCA was a pioneer in color television. Their technology became the North American standard. Color sets, including the RCA ColorTrak models, were made in Prescott. However, as electronics manufacturing shifted towards southeast Asia, the economic situation changed. The RCA plant in Prescott closed in the early 1990s. Today, the building is the head office of a trucking company.