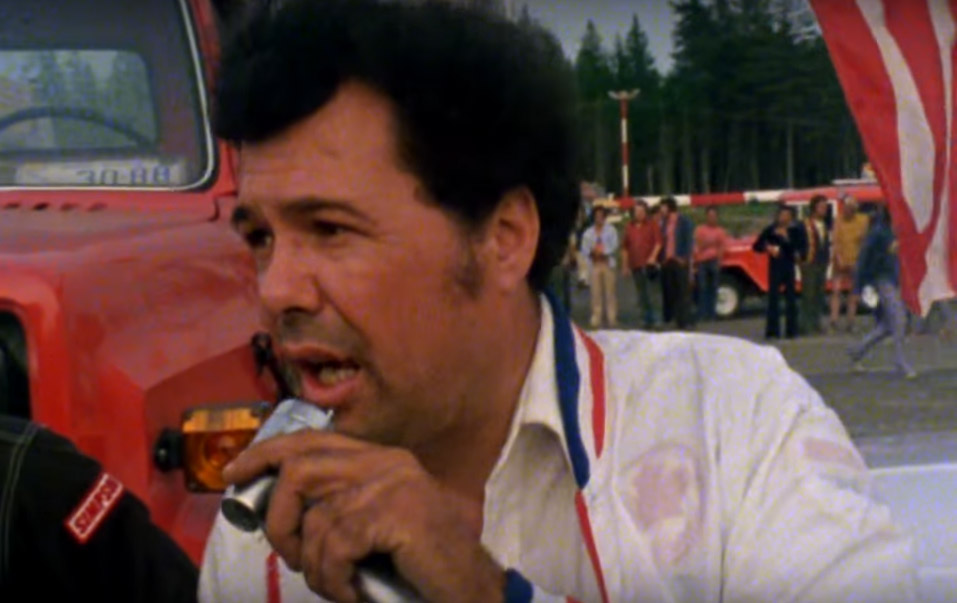 Ken “The Mad Canadian” Carter promoting a daredevil event. Video still: “The Devil at Your Heels,” NFB via Youtube

Ken “The Mad Canadian” Carter wanted to drive across the St. Lawrence River. He just didn’t want to use a bridge. In the late 1970s, the stuntman wanted to jump across the river from a specially constructed ramp in a field west of Morrisburg in a rocket-powered, winged Lincoln Continental, and land one mile away on Ogden Island near Waddington.

The 1970s and 1980s were the era of the stuntman and daredevil. Evel Knievel’s career was at its height. Ken Carter was born in Montreal to Polish immigrant parents, he never finished school and pursued a career as a stuntman. That isn’t the sort of thing school guidance counsellors usually recommend. Throughout the 1960s and 1970s, he attracted huge crowds across Canada, jumping across rows of old cars and buses. 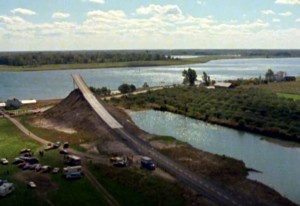 The launch ramp intended to begin a mile-long rocket powered flight. Video still: “The Devil at Your Heels,” NFB via Youtube

The Morrisburg Superjump, as it became known, took stunt jumping to a whole new level. Preparations started in 1975 with plans for jump day to be September 25, 1976. Crews started building the big ramp, which looked like a combination of a reverse ski jump and half-built highway overpass, on farmland along Hanes Road between Highway 2 and Lakeshore Drive. ABC’s Wide World of Sports planned to broadcast the jump and offered $250,000 in sponsorship. Evel Knievel did an advance report from Morrisburg for the show and doubted it would work. Construction was behind schedule on the 1,400-foot ramp, and the rocket Lincoln wasn’t ready. ABC pulled its support and the 1976 jump didn’t go ahead. 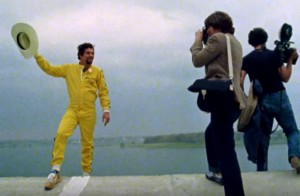 Stuntman Kenny Powers poses for photographers at the lip of the launch ramp. Video still: “The Devil at Your Heels,” NFB via Youtube

Two more jumps were planned in 1978, but both were cancelled. Ken Carter eventually found new financial backers and plans were made for another attempt in 1979. It went ahead unannounced and under secrecy on October 5, but it wasn’t The Mad Canadian who made the attempt. American stuntman Kenny Powers from South Carolina was a friend and protégé of Carter, and did the jump instead. Rumors abound about exactly why Powers substituted for Carter. Some stories say he was scared and changed his mind. A news story that first appeared in the Ogdensburg Journal and was circulated by the Associated Press and reprinted in the Montreal Gazette said that Carter had injured his arm and couldn’t do the jump. Carter claimed that he was not interested in doing the jump for spectators, but instead for a film crew that was involved with the financial backers who took over after ABC cancelled. There were also local news reports that Powers was brought in as a last-minute substitute because Carter’s crew was tired of the repeated delays.

The reports about where Ken Carter was on October 5 when Kenny Powers made the jump are not even consistent. One says he was in an Ottawa hotel room, another says he was on his way to Morrisburg but the organizers didn’t want to wait for him to get there. 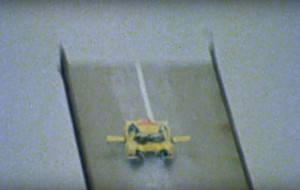 Kenny Powers approaching lifoff in the rocket-powered Lincoln Continental. Video still: “The Devil at Your Heels,” NFB via Youtube

At 11:30 am, the car, with its twin hydrogen peroxide-fueled rockets with 11,000 pounds of thrust, sailed about 400 feet off the end of the ramp. The Wright Brothers had gone 852 feet in their first flight in 1911. According to an unnamed Ontario Provincial Police officer who witnessed the jump, the big Lincoln broke apart, flipped over, and crashed into the river below, right side up. Kenny Powers broke his back.

He and the pieces of the car were retrieved by volunteers on boats. Paramedics and police officers took over on shore and sped away with the stuntman for a long hospital stay. 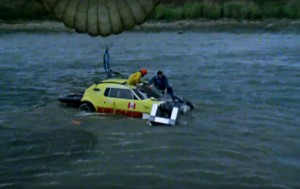 Injured Kenny Powers being fished out the river after the failed jump. Video still: “The Devil at Your Heels,” NFB via Youtube

Ken Carter later said that Kenny Powers wasn’t prepared for the jump, but the two stuntmen remained good friends. Both said that another attempt would be made, but it never happened.

In 2014, American stuntman “Mad Mike Hughes” announced he was going to jump from Morrisburg to Ogden Island, not in a car, but with a super-heated water rocket sort of attached to his back. Hughes’ plan was shelved though because the town and other authorities would not grant the required permits. It was easier to be a stuntman on public roads, disrupt St. Lawrence Seaway traffic, and use a rocket to cross the border at an unofficial site in the 1970s than it is today.

Ken Carter died in Peterborough, Ontario in 1983 after missing the landing ramp while doing a jump at a local speedway. He was 45. Kenny Powers, who had served in the US Navy, died at a Virginia veteran’s hospital in 2009 at age 62. As for getting from Morrisburg to Waddington, it’s probably safer to take the time and effort by driving across a bridge or taking a boat than using a rocket to jump the St. Lawrence.

Left: The Superjump ramp area as it appears today. No real evidence of the ramp remains. Right: The St. Lawrence near Morrisburg at the approximate site of the jump area. Ogden Island is across the channel. Photos: James Morgan

2 Comments on “The “Mad Canadian” and the Morrisburg Superjump”