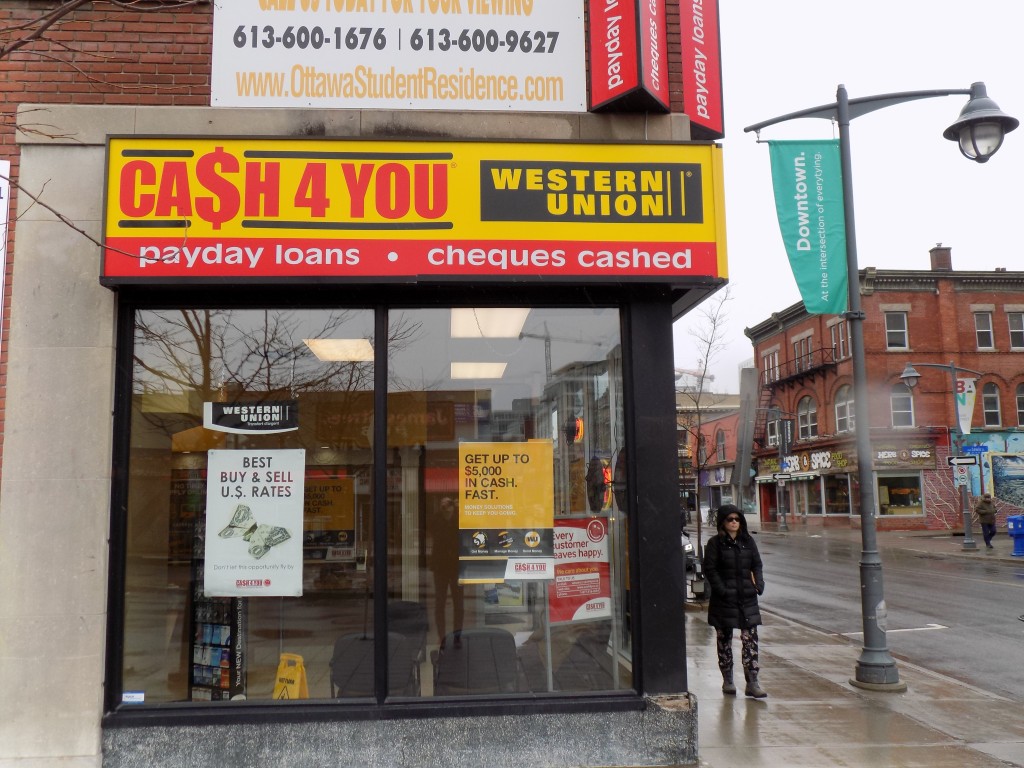 The difficulty of living paycheck to paycheck is a very real challenge for many Canadians, and many turn to payday loans to get by. Payday loan companies offer cash to anyone with no collateral, minimal questions, and the approval process can take as little as 10 minutes. The catch though is high interest rates and service fees. Governments have started to restrict their business in Canada due to concerns about their operating practices.

On April 11, Ottawa City Council passed a motion requiring city zoning and licencing staff to develop recommendations on how the city could limit the number of payday loan outlets by restricting their zoning to permit a maximum number of outlets in certain neighborhoods or requiring them to have special licenses. Mayor Jim Watson has been a major supporter of controlling the number of outlets. He introduced the motion and it was seconded by Councillor Mathieu Fleury, whose Rideau-Vanier Ward is home to several payday loan shops.

Ontario’s Municipal Act allows city councils to do what Ottawa is attempting. City councils are allowed to pass laws limiting the number of payday loan outlets and the number of them that can be located in a particular neighborhood. The same regulations exist to allow cities to control the number of “adult entertainment” facilities (strip bars).

In January 2018, new provincial regulations also came into effect in Ontario that regulate the fees payday loan lenders can charge customers. The maximum rate a lender can charge for a $100 loan is now $15. In July, further regulations take effect that will limit fees, loan amounts, and advertising even further. 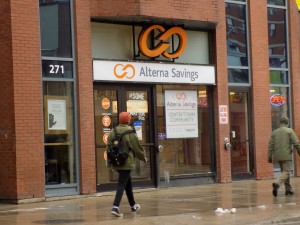 Alterna Savings is one of the three Ottawa credit unions Causeway Work Centre partnered with for its lending program. Photo: James Morgan

An alternative for the “underbanked”

The biggest reason for the tighter regulations is a widely held belief that payday loan companies get their customers trapped in a deep cycle of debt they end up finding almost impossible to get out of because of the various fees and interest rates that are much higher than what banks or other financial institutions charge. Most payday loan users are low-income earners or people who have difficulty securing credit from banks. Some are on government disability pensions or social assistance.

The Causeway Work Centre, an Ottawa community organization that assists people facing barriers to employment, has a program that provides small, short-term loans to clients to help them get out of their payday loan debts. Director of Social Business and Social Finance Doug Pawson said Causeway provided a small amount of capital and partnered with three local credit unions; Alterna Savings, Front Line, and Your Credit Union, who administer the loans.

“People don’t have the right banking options,” said Pawson, who explained that many low-income people don’t even feel welcome going inside a regular bank. He said many of the so-called “underbanked” people have bank accounts, but their financial situation does not allow them to easily access other services banks offer like overdraft protection. Pawson said he has seen clients with payday loans who owed over $7,000 on a loan due to fees and interest rates as high as 59.9%. The Canadian federal threshold for illegal interest rates used in criminal loan sharking is 60%, according to the Department of Justice.

The Causeway program has been running for over a year. Pawson said it has helped get underbanked people engaged with better financial services. When they get a short-term loan through one of the partner credit unions, they become a member of the organization like all credit union customers do. They’re also able to do things like cash checks without the service fees payday loan outlets charge for the transaction.

The payday loan industry is complying with tougher regulations, but there are signs of lobbying and resistance. The Canadian Consumer Finance Association (CCFA) represents the big players in the industry. Its Board of Directors is composed of people with the big payday loan chains like Money Mart, Cash Money, and CA$H 4 YOU. Their website is full of testimonials from alleged waitresses and warehouse clerks who say they need payday loans in order to pay their bills and put food on the table. Statements on the website accuse governments across the country of trying to destroy an industry that provides a valuable consumer service.

The CCFA argues that Canadians need the payday loan business because regular banks won’t serve many of them. Doug Pawson said the reliance on payday loans by low income Canadians is actually a “symptom of a broader problem,” – which is the fact that many of them are not welcome – or don’t feel welcome, as customers of banks.