Being no fan of cat videos or 99% of my social media news feed, when I’m bored I tend to cruise over to Atlas Obscura to find something odd and interesting to pass the time. I was struck by this headline today: “The Day Without News,” an article that reads, in part:

“On Friday, April 18, 1930, at 8:45 p.m., people all over Britain settled in to catch the BBC News evening bulletin. But when they flipped on their radios, they heard a soothing announcement instead:

Good evening. Today is Good Friday. There is no news.

For the rest of the 15-minute time slot, the station played only piano music.”

What BBC probably meant was that nothing of importance to people of importance had occurred. But my second thought was that 99% of human history occurred in the absence of regular news from distant places, and if there were any bad consequences from that – well – we haven’t heard about it. 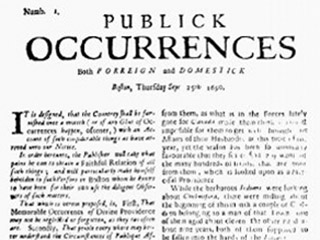 In the ancient world, if you wanted to know about something that wasn’t a royal edict, you might question travelers at the caravanserai. And you might then spread that gossip in the tavern or marketplace. You can credit (or blame) the Chinese for inventing the newspaper, the “Spring and Autumn Annals,” compiled allegedly by Confucius in the eighth century B.C.E. and distributed across the empire.

The newspaper came to the Americas in 1690 with the publication in Cambridge, Mass. of “Publick Occurrences Both Forreign and Domestick.” In the intervening millennia, the appetite for news had grown from semi-annual to monthly. But the need for official imprimatur had not gone away. The independent publication was scuttled by the colonial government after its first monthly edition.

By 1784, the news had gone daily, with the launch of the “Pennsylvania Packet and Daily Advertiser,” starting a daily newsprint addiction that would last until the rise of the cable news and the internet.

Now, of course, the news is 24/7/365 (366 in leap years) and has become so intrusive that most sane people turn off the alert sounds their devices play when electronic news arrives in their lives.

The challenge has become finding out what you need to know to inform your life, without the pursuit of the news becoming your life. If you are privy to any information on how best to do that, that would be welcome news at any time of day or night.

5 Comments on “Buried in the news”