Subscribe
iTunesSpotifyGoogle PlayRSS
by James Morgan on May 12th, 2018 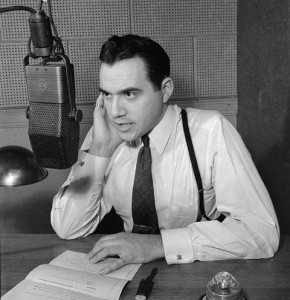 Lorne Greene reading news on the CBC radio network in December, 1942. Greene was known as “the voice of doom” because of how his deep voice often delivered grim news during World War II. American audiences later knew him as Ben Cartwright on NBC-TV’s “Bonanza!” from 1959 to 1973. Photo: Ronny Jaques. National Film Board of Canada/Library and Archives Canada: PA-116178

In a news release aimed at “setting the record straight” on archives digitization, the CBC emphasized that the archives are not being “destroyed” as some have alleged, but that digitization is necessary because many of the materials are in deteriorating condition or require technology that is obsolete or difficult to maintain in order to view them. The CBC began its radio network in 1936 and its television network in 1952. Audio tape, film, and even video tape has been replaced in the past decade with digital file storage that is captured right through microphones or cameras. Tape and film break down over time. It is increasingly difficult to find parts or people to keep aging equipment operational. 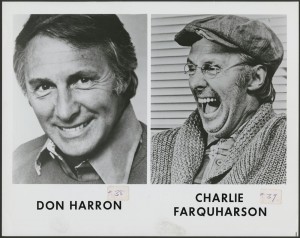 Friends’ Executive Director Jim Thompson said the organization has no problem with the materials being digitized, but they don’t want the originals destroyed. “Would you torch a Picasso after taking a picture of it?”, he asked. Thompson added that it is unknown how well digital files will hold up 100 years from now, and he also believes there is a risk that the digital record of major political and historical events could be “altered for nefarious purposes.” Thompson said other broadcasters have digitized their archives but also preserved the originals to the best degree possible. The Friends of Canadian Broadcasting have launched a petition to have the original materials in the CBC archives preserved. As of May 7, over 16,000 people had signed it.

The CBC news release said that the network communicated with organizations around the world, including the Library of Congress and the International Federation of Television Archives. Library and Archives Canada also has copies of thousands of hours of CBC radio and television programming on audio or video tape that were transferred to the federal agency. Additionally, many materials are available on the CBC archives website. However, they are not complete radio and television programs, but are rather excerpts of a small number of programs that are relevant to particular topics. 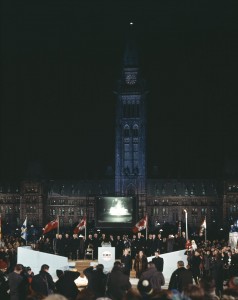 According to Chuck Thompson (no relation to Jim Thompson), the CBC’s Head of Public Affairs, items preserved for digitization must be able to meet three requirements. They have to reusable in current programming, the material should be able to generate revenue for the CBC through sales and licensing to other outlets who wish to use it. And, items must be of significant cultural and historical importance to be digitized. Chuck Thompson said materials that do not meet the requirements will not be retained or preserved and will be “recycled in an environmentally responsible manner.” Chuck Thompson said that digitization will allow the archival materials themselves to “endure,” and they can be migrated to differing forms of digital storage, too. He also noted that the fidelity and quality of materials is not diminished through digitization.

The Beachcombers aired on CBC-TV from 1972 to 1992 and followed the adventures of small town characters who salvaged logs for a living on the British Columbia coast. Actor Jackson Davies played RCMP Constable John Constable on the show for 16 seasons. He’s been trying for several years to convince the CBC to make the 360 episodes of The Beachcombers that have not been seen on television in decades available on video or to be rebroadcast for the many fans who enjoyed the show. “Like my parents said to me when I started acting, maybe you should have a backup, but CBC is not doing that, they are destroying the originals,” he said from the Vancouver area, where he now teaches acting and motion picture arts at Capilano University. Davies said he thinks it isn’t too wise that the CBC is not planning to keep the originals of the show that formed a major part of his career but wondered why the network is planning to digitize the episodes of The Beachcombers when they still refuse to rebroadcast them on television or make them available for home viewing.

The Canadian Broadcasting Corporation is a public broadcaster, owned by the Government of Canada. Private broadcasters have traditionally not saved much of their audio or visual material to keep costs down by re-using tapes, or not having the capacity to store items. The CBC archives controversy reflects the dynamics of cost efficiency and historical preservation in the digital age.