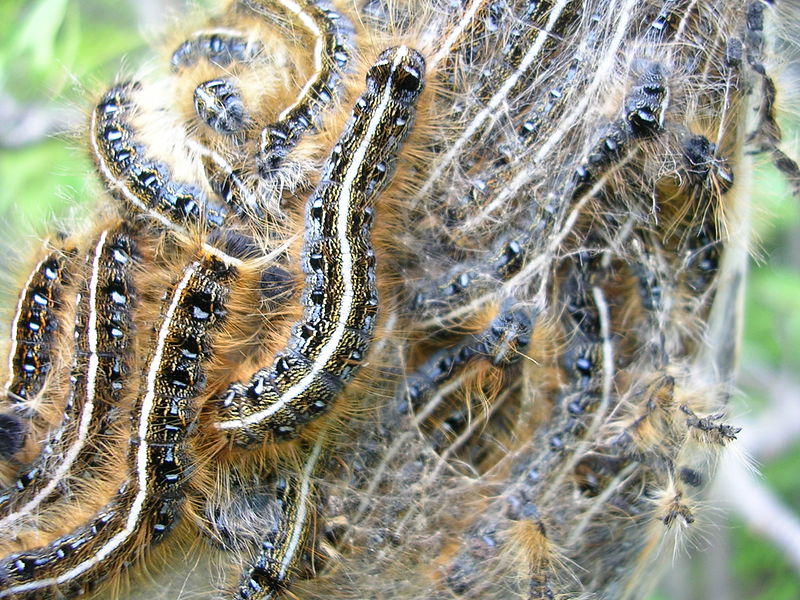 Like a B-grade horror film, they’re back. Writhing en masse, draping cobwebs, and raining tiny “peppercorn” poop onto us, tent caterpillars have returned. Known variously as tent worms, army worms, and a host of other names not suitable to print, there are actually two species of tent caterpillars.

Eastern tent caterpillars (ETC) make a proper tent and prefer trees in the rose family such as cherry, apple and pear. Because of this, ETC females lay eggs almost exclusively on those trees.  The ETC is a hairy, brown-ish caterpillar lined with blue, and sporting a single white stripe running down its back. Late last summer, female ETC moths laid light-brown egg masses resembling dabs of spray-foam insulation on twigs. Though they hatched in late April, the tents did not become noticeable until May. 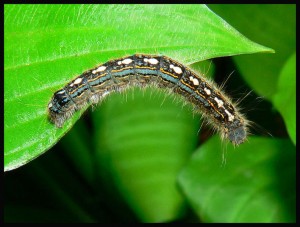 Drought and this guy, the forest tent caterpillar, have been stressing the maples out. Photo: Greg Hume, Creative Commons, some rights reserved

The forest tent caterpillar (FTC), which would like to take credit for building tents, does not in fact make a nest. It is similar to ETC in size and coloration but has a row of keyhole-shaped “footprints” down its back rather than a stripe. Both species are native.

It is the forest tent caterpillar which poses the bigger threat to woodlot owners, and especially maple producers. The FTC prefers sugar maples and avoids red (soft) maples. As with all tent caterpillars, anything is fair game once its favorite food is gone. A single defoliation will weaken a tree, and in maples can significantly lower sap-sugar content for a year or more. A repeat defoliation will further damage trees, making them more susceptible to other stressors such as lecanium scale insects (which, aside from hurting trees, leave sticky droplets on your windshield if you park under a maple). Timber managers as well are watching how the caterpillar outbreak progresses.

It may seem like needless worry over a phenomenon that has been recurring for a few thousand years. Indeed, under good conditions only 15-20 percent of overstory trees die as a result of consecutive defoliations, according to my forester friends. But trees have never experienced water stress like they have in the past two decades, especially in 2012 and 2016. It may take two to three years of ideal conditions for a tree to recover from such prolonged dry spells. Secondary pests like scale only add to the stress. As if that wasn’t enough, a researcher at the University of Alberta discovered that outbreaks within fragmented forests last much longer than those in large unbroken tracts of forest. 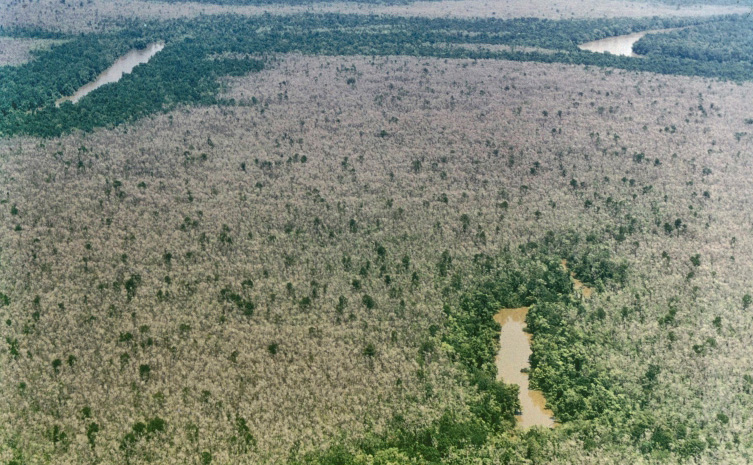 In the past, some maple producers have had their sugar bushes aerially sprayed to control tent caterpillars. The best product for killing them is a called Bt (for Bacillus thurengiensis, the organism that makes the toxin) and is available under various trade names. The “kurstaki” variant of Bt is effective against tent worms but safe for humans, wildlife, and most other insects.

In cases of severe tent caterpillar outbreaks, timber managers may want to consider delaying thinning operations in the most heavily infested stands, as harvesting operations can further stress trees. Horse owners with a pregnant mare should try to limit ETC around pastures. Such controls might include removing host trees.

Homeowners can use Bt on their yard trees, but will have to hurry, as eastern tent caterpillars are getting past the stage that is easy to control. Once they exceed about 8 cm. (1.5 inches). they do not succumb to Bt as much. Since tent worms congregate in their nests during mid-day, their nests can be thrown to the ground and squashed where they’re reachable. Forest tent caterpillars are still small enough that there may be time to spray Bt. As these pests eat up favored food sources they travel to seek less-desirable ones. Oddly enough, they seem to hate our native red (soft) maples.

Using adhesive products like “Tanglefoot” and other brands on the trunks can help protect small yard trees from getting invaded by hungry hordes on the march. Watering yard trees during dry periods will help them recover from defoliation.

There are many natural controls for tent caterpillars such as viruses and fungi, but it can take a few years for these to reach a point where they bring down the caterpillar population. The biggest threat to tent caterpillars is cool weather, because they are unable to digest food below about 15C (59F) degrees. In a cool spring, they can starve to death with full bellies. Infestations typically last from two to four years in large tracts of forest, and up to six years in small blocks.

One reason fragmented forests have longer infestation times is that sunlight inhibits caterpillar- killing viruses. A species of non- biting fly parasitizes the caterpillars, and though these flies can be somewhat of a nuisance themselves, remember what they’re doing. Unfortunately, no birds native to the area are known to eat the tent worms.