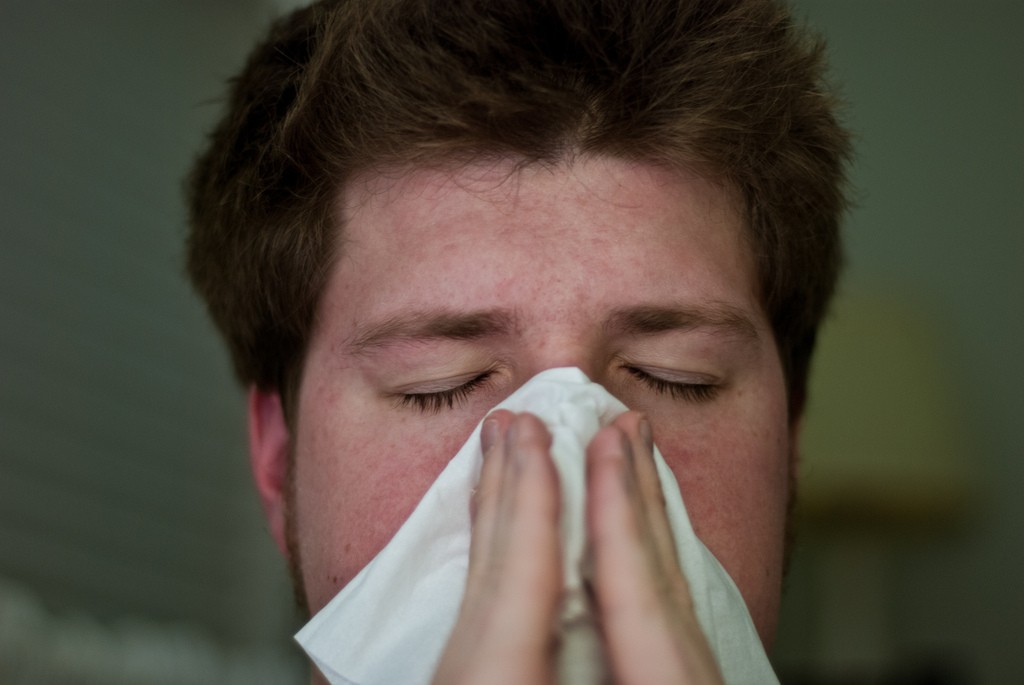 By mid-March it starts to feel as though winter is the only time of year not in a hurry to get somewhere. By comparison, every other season seems to go by with a Doppler-type velocity like an Indy car that blurs past. But I realize any day now, spring could get sprung, and when that happens, plant life will change by the day, if not the hour. Some of the first plants to catch my eye are ones which have historically been used to treat coughs and colds. Good timing, I’d say.

Herbal remedies have been part of human culture since the day it got invented. No matter where our early ancestors settled, they exploited regional plants for medicinal as well as culinary value. In a sense, unknown plants served as an evolutionary pressure, except they selected against bad luck, and perhaps gullibility, and didn’t likely help the human genome a lot. As knowledge of plant medicine accrued, it was refined, committed to memory and passed along—first orally and later in writing—from one generation to the next. Ancient healers had to know the properties of a given plant, what it might interact with, and how to tell it from similar species. This of course helped protect them from the wrath of disgruntled patients, not to mention early malpractice suits.

People often focus on the “herbal” half of the term and gloss over the “medicine” part. Many potent modern drugs are derived from plants. When Beatrix Potter has a naughty Peter Rabbit drink chamomile tea and go to bed, we feel warm and fuzzy about herbs. If Mommy Bunny had served Peter a cup of digitalis tea, it would have been a very different story, one involving a funeral for Peter and possible jail time for Ma Bunny. As much as I support and respect the use of herbal medicines, it should always be done in cooperation with your health-care provider and an experienced herbalist. 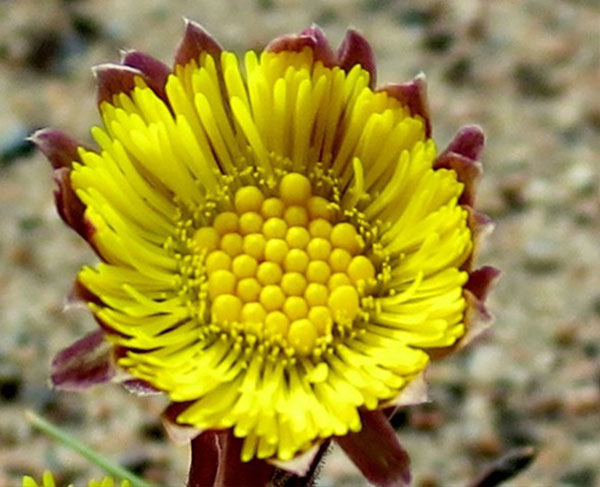 Now that the lawyers are happy, let’s talk about coltsfoot, whose dandelion-like, bright yellow flowers emerge, long before any leaves appear, from muddy roadside ditches, rail embankments and other places with a history of soil disturbance. Coltsfoot (Tussilago farfara), a plant native to Europe and Asia which seems to materialize overnight as the snowbanks melt, has naturalized throughout North America. Its species name, Tussilago, is from the Latin word for cough, and its common name comes from the fact that its leaves, which emerge as the flowers die back, are shaped like a horse’s hoof.

In medieval Europe, its flowers were virtually synonymous with healing, becoming the symbol for an apothecary, sort of an old-time drugstore that dispensed herbal medicine. Coltsfoot leaves are either used as a tea, made into a syrup, or smoked. This latter sounds counter-intuitive as a cough treatment, but is a fairly common way to treat respiratory issues. Pliny the Elder—think Socrates, but Roman instead of Greek and slightly less ancient—treated his asthma by inhaling the smoke of dried coltsfoot leaves and flowers. (In an ironic and tragic twist, Pliny died of smoke inhalation during the eruption of Mount Vesuvius.) 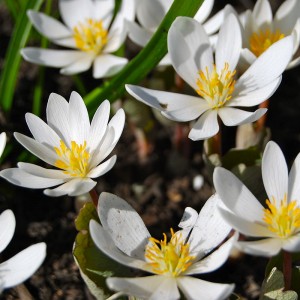 The white blossoms of bloodroot (Sanguinaria canadensis), a native woodland flower, also appear just as the snow recedes, although its leaves unfurl before petal drop. Bloodroot has a fleshy tuber, which when broken will produce beet-red sap. In bygone days, this was employed as rouge. Its cosmetic value pales in comparison to its medicinal use, though. In addition to being antiseptic, bloodroot is a powerful expectorant, used in minute amounts to break up and clear out dense bronchial congestion.

A few caveats regarding bloodroot: On public lands, it is a protected plant, and cannot legally be harvested. While it is one of my all-time favorite wildflowers, it is one of those remedies that absolutely should not be used without supervision. It contains toxins which induce violent vomiting in quantities beyond a tiny therapeutic dose, and could even cause liver damage. 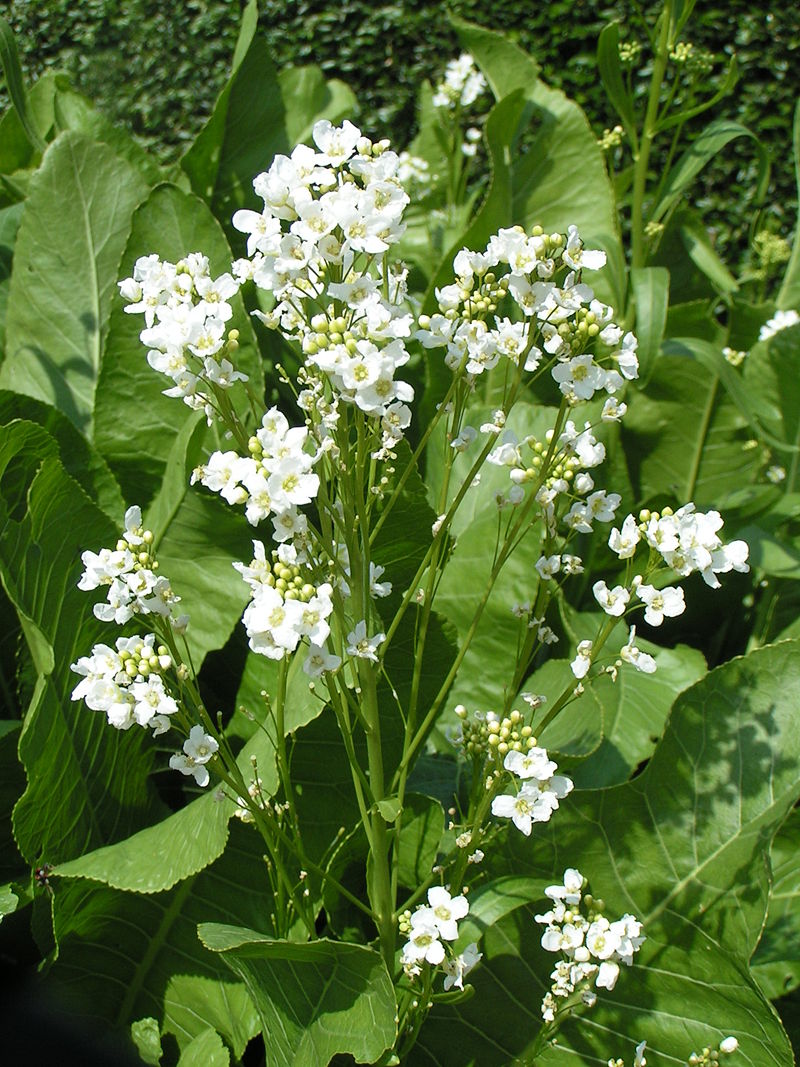 Horseradish root, can be applied as an external plaster to breaks up chest congestion. (Dilution is necessary to prevent blistering). Photo: Pethan, Creative Commons, some rights reserved

Another early-season remedy comes from a domesticated plant of European origin, horseradish. This perennial has long slender white roots that may be harvested in any month containing the letter “r,” making it sound like a Sesame Street sponsorship. In our region we probably need to move a bit of snow to dig horseradish before its roots become too tough to process in May. It might need to be gathered just as winter transitions to spring, but it does not send up any showy blooms to announce its location—you need to have some idea of where you planted the stuff.

Although we are familiar with it as a condiment, horseradish has a long history as a healing herb. In addition to being a good diuretic, is used externally as a chest compress to break up congestion. However, it is so powerful that it can cause skin blistering if not done properly. I recently learned that our friend Pliny thought it also worked as a scorpion repellant. In the twenty years since I first began growing horseradish, there has not been one scorpion sighted at my place, so maybe he was onto something. Since coughs are still commonplace, I’ll focus my attention on ways to treat those, and worry about poisonous arachnids later.