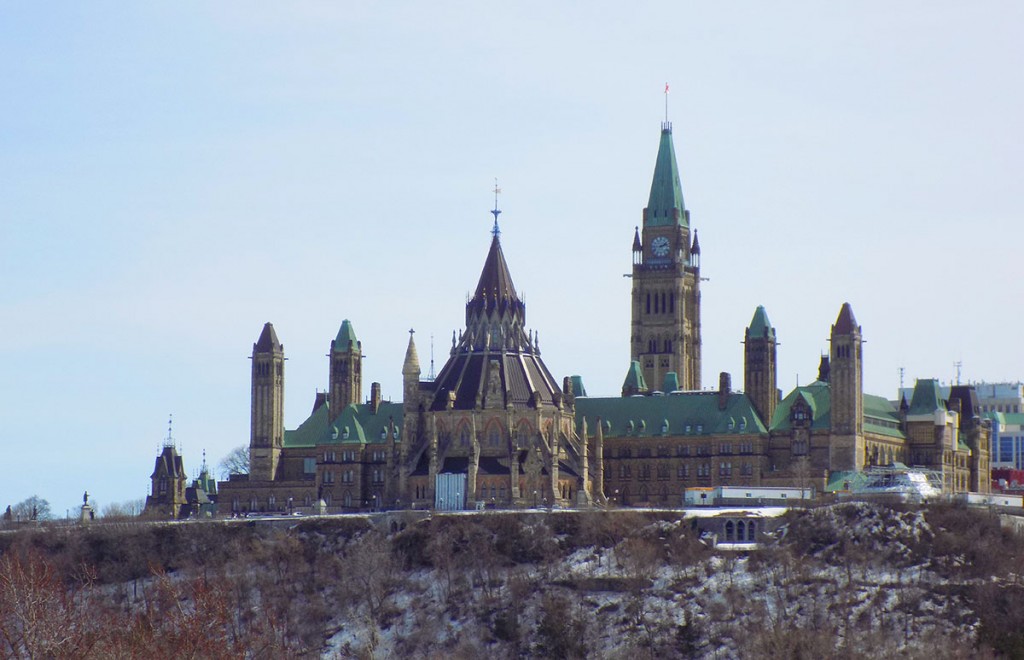 Parliament Hill, seen from across the Ottawa River in Gatineau, Quebec. The Conservatives currently form the Official Opposition in the House of Commons. Photo: James Morgan

Leadership campaigns for Canadian political parties are normally not too exciting, but the race to lead the Conservative Party of Canada is unusual and entertaining. First of all, 14 people are running for the job. Whoever wins gets to not only lead the party, but also will be its candidate for Prime Minister in the next federal election. It’s a crowded slate of candidates with some very diverse and extreme opinions.

Three of the candidates appear to be borrowing pages from Donald Trump’s playbook. Kellie Leitch, an Ontario Member of Parliament (MP), wants the same kind of “extreme vetting” for immigrants to Canada that President Trump has proposed for the US. Leitch wants to make sure newcomers to Canada agree to live by proper “Canadian values.” However, there isn’t really an official definition of what those are. Until recently, her campaign manager was Nick Kouvalis, former advisor to the late and legendary Mayor of Toronto, Rob Ford. Kouvalis stepped down as Leitch’s manager in February after using language associated with the alt-right, planting a fake news story, and recurring problems with alcoholism.

In the multimillionaire reality TV star category is Kevin O’Leary. The mutual fund and software magnate became a household name in Canada during his years as an often brash and abrasive panelist on the entrepreneurial CBC-TV reality show, Dragon’s Den. Aspiring entrepreneurs were often tearful after enduring bristling rejections from O’Leary. Since 2009, he’s also been on its American spinoff, Shark Tank, on ABC. Like Donald Trump, O’Leary has also written books about his success, and has a brand of wine, too. And like Trump, Kevin O’Leary has never held public office of any kind. Although he was born in Montreal, he doesn’t speak any French, which is a liability in a country where it’s one of the official languages.

The third most colorful leadership hopeful is Quebec MP Maxime Bernier. He resigned as Foreign Affairs Minister in Prime Minister Stephen Harper’s government because he left some folders containing classified information at his girlfriend’s house. The situation was worsened by the fact that his girlfriend had associations with outlaw motorcycle gangs that form a big part of organized crime in Quebec. Bernier wants to considerably reduce the size and role of the federal government. On immigration, he recently said that if he were Prime Minister, he’d send the Canadian Army to stop asylum seekers from the U.S. crossing the border illegally to claim refugee status in Canada.

The other 11 candidates in the Conservative leadership race are getting less attention, simply because they are not saying or doing anything particularly controversial. Some of them are quite conservative ideologically, most notably Saskatchewan MP Brad Trost, who unabashedly opposes big government, abortion, and gay marriage. Others are more moderate, like Ontario MP’s Michael Chong, Erin O’Toole, and Lisa Raitt, or Andrew Scheer from Saskatchewan. Chong openly discusses climate change, a rarity for some Conservative politicians. The weirdest thing to happen to him in the campaign was last week when a Globe and Mail newspaper columnist attempted to breastfeed one of his children.

Conservative Party of Canada members vote for their new leader on May 27.

3 Comments on “An unusual race to lead Canada’s Conservatives”