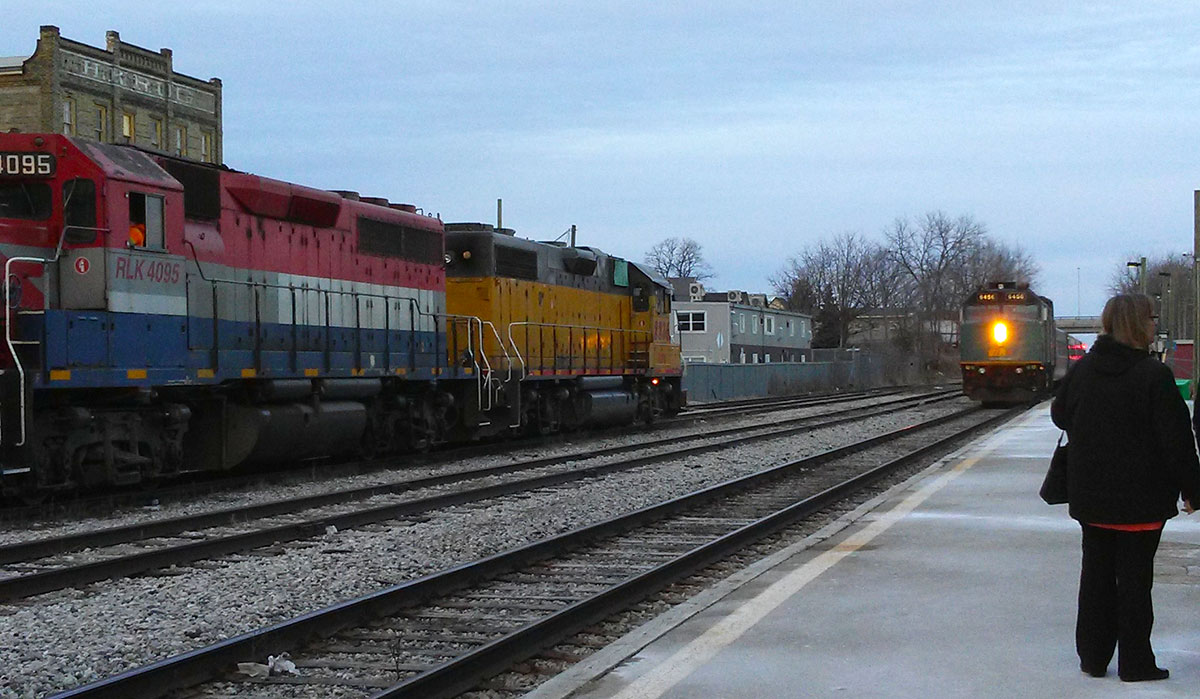 VIA Train 87 approaching the station in Kitchener, Ontario with the author on board. The locomotives at the left belong to the Goderich and Exeter Railway. Photo: Emmie Bowers.

Railways (that’s “railroad” to Americans), are a big part of Canadian history. Passenger rail travel in Canada has had a rough ride though since its glory days of the late 19th and early 20th centuries. By the 1970s, Canadian National (CN) and Canadian Pacific (CP), the country’s two biggest railways that handled most of the passenger traffic, were losing a lot of money on it. Trains were no match for highways and airplanes. The federal government stepped in and nationalized most of the passenger service in 1978 when it created VIA Rail.

In the past 39 years, VIA has limped its way through repeated budget cuts and service reductions. It still provides transcontinental service, but only from Nova Scotia to British Columbia. Railways disappeared from Newfoundland and Prince Edward Island over 20 years ago. Most of VIA’s service focuses on what it calls the Corridor—the most heavily populated and urban part of Canada between Quebec City and Windsor, Ontario.

I’ve traveled with VIA many times over the years. The most recent occasion was to attend a family event in my hometown of Listowel, Ontario. I took the train from Ottawa to Kitchener because Listowel hasn’t had passenger service since the 1960s, and the last freight trains went through in the 1990s. The tracks are now a cycling path. Friends and family made sure I got to Listowel and then back to Kitchener for the return trip. There was a layover of more than two hours each time in Toronto, too. Fortunately, I have friends in the city who were happy to meet for lunch. 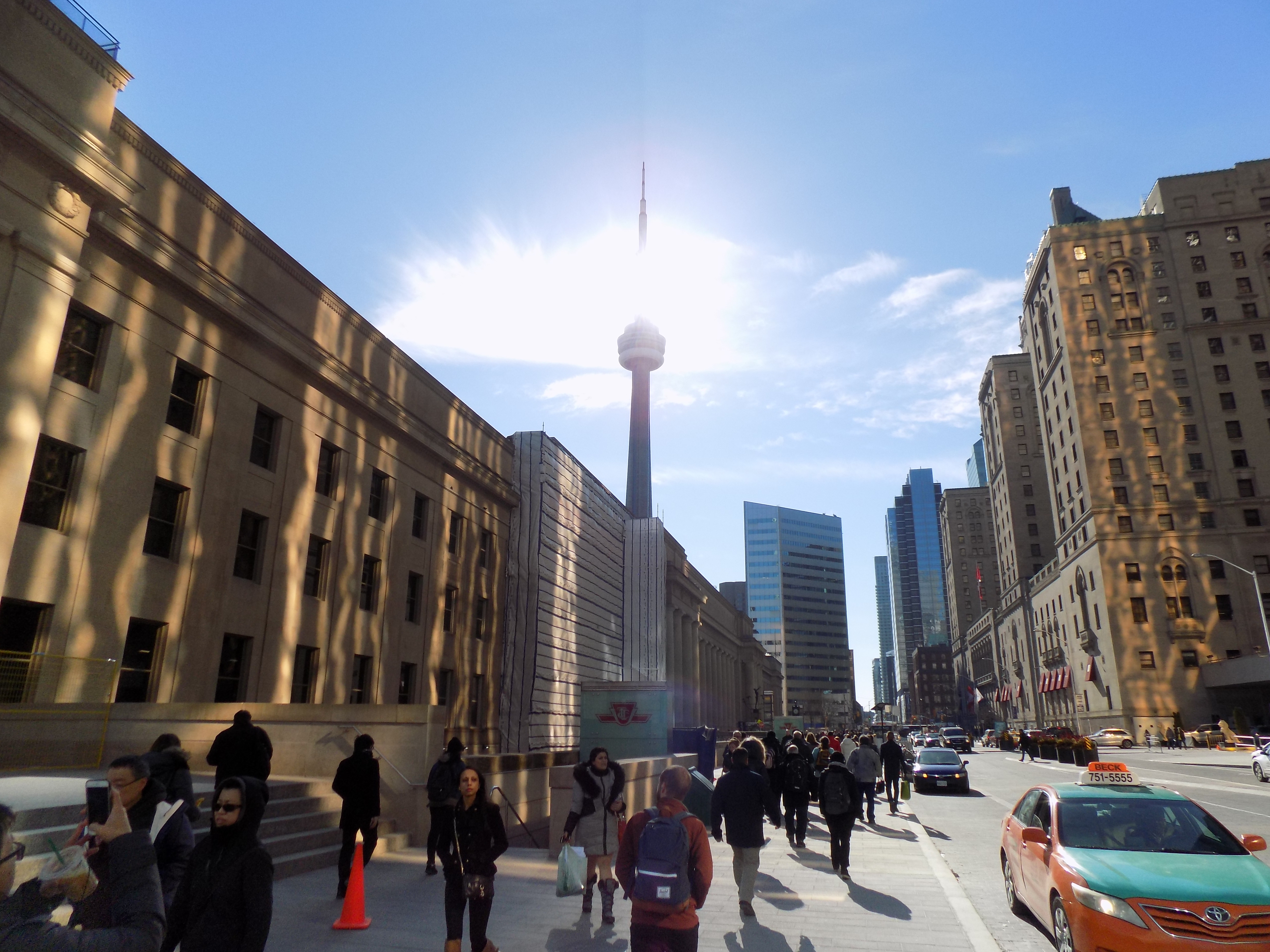 Union Station in Toronto on the left with the CN Tower reaching for the sun in the background. The Royal York Hotel is on the right. Photo: James Morgan

Traveling on VIA is a mix of past and present. Most of the cars are from the late 1970s, but have been redecorated inside and have conveniences like wi-fi and power outlets to plug in laptops and phones. Most stations are modern, but a few are still in old buildings like the quaint station in Kitchener or the stately Union Station in Toronto.

The trip through central and eastern Ontario offers scenic views of Lake Ontario and pastoral countryside. As in most big cities, the ride through Toronto reveals industrial areas, and a lot of junk, garbage, and graffiti. Never judge a big city by what is found along its railway tracks. 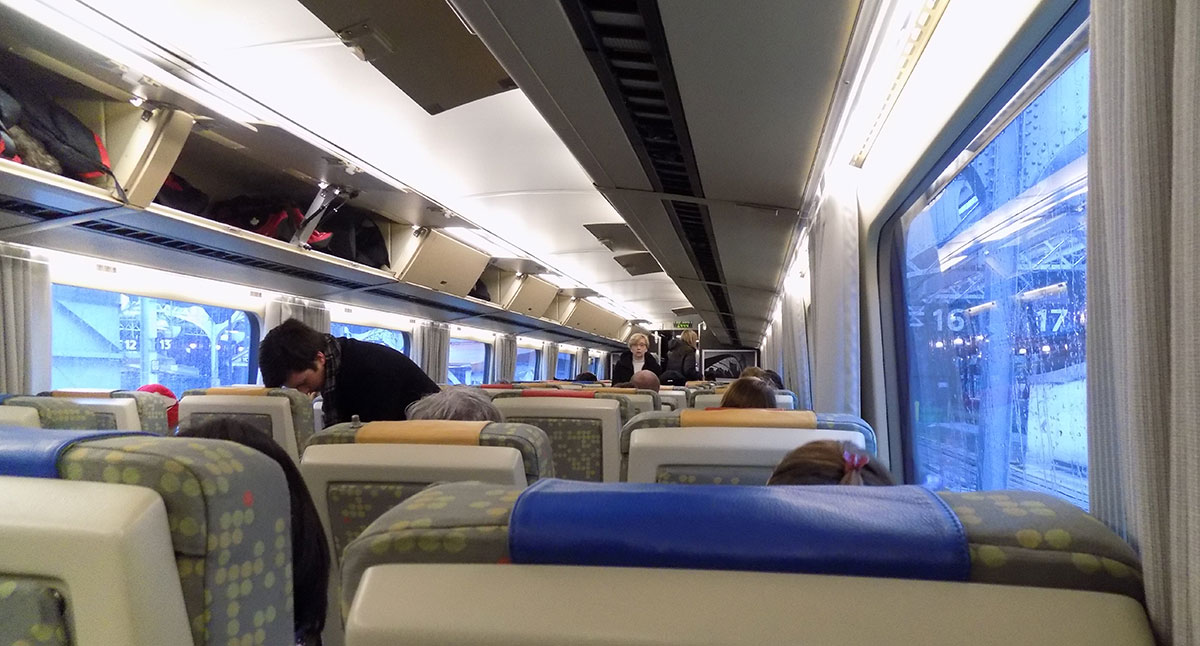 VIA pricing isn’t the most economical. It cost me CDN$200 for the entire trip and took the same amount of time as driving. To celebrate Canada’s 150th anniversary, VIA recently offered unlimited use passes to people under 25 years of age for $150. The response was huge, the website was inundated, and then VIA decided to put a freeze on the program. Inefficiencies and under-funding aside, VIA Rail is a great way to comfortably travel in Canada and get a feel for a big part of its history.