Starry stonewort gets its name from white, star-shaped bulbils which are produced by its root-like filaments to anchor it to bottom sediment. Photo: Jim Grazio, Pennslylvania Dept. of Environmental Protection

It sounds like it could be a punk band or a designer drug, but starry stonewort (Nitellopsis obtusa) is an invasive algae that has spread throughout the Great Lakes region since its first North American appearance in 1978 in the St. Lawrence River. Native to Europe and western Asia, starry stonewort was probably introduced by way of trans-oceanic ship ballast water. It was then discovered in Michigan in 1983, and has since infested waterways in Minnesota, Indiana, Pennsylvania, Vermont and Wisconsin. At this time, Michigan has the dubious distinction of having the greatest number of infested sites.

We tend to think of algae as an amorphous slime, the green stuff that we might see on the sides of an aquarium or a birdbath, but starry stonewort is not like that at all. Having a main stem with numerous whorls of 4 to 6 branchlets, this large robust algae more closely resembles a vascular plant such as Eurasian watermilfoil. 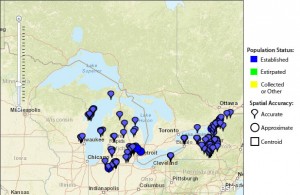 Starry stonewort has spread widely through waters in and around New York since it was first identified as an invasive in 1978. Map: USGS

Its name comes from the many small (4-5mm), white, star-shaped bulbils which are produced by its root-like filaments that anchor it to benthic sediments. Individual cells are big—each branch cell is around a millimeter thick, and a cell may grow up to 80 cm long. Altogether, a single plant may reach a length of 2 meters or so.

Starry stonewort thrives in alkaline sediments, such as those created by the carbonaceous rock underlying most of the Great Lakes Basin, and much of the St. Lawrence River. Preferring slow-moving water, it can survive in very low-light conditions at depths as great as 9 meters. In northern New York State it generally begins to show up in mid-July, achieving peak biomass in September. 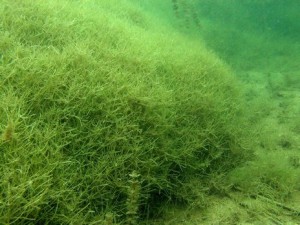 Like most invasive aquatic plants, starry stonewort can form dense mats, impeding the movement and breeding of fish and waterfowl, and reducing the recreational value of a water body. The annual fall die-off and decomposition of these vegetative mats robs water of dissolved oxygen, which stresses many fish species, particularly sensitive ones like trout and salmon. N. obtusa is readily dispersed by seasonally strong currents, migratory waterfowl, dredging activities, and boats and trailers, all of which can spread bulbils and stem or branch fragments to new locations.

Unfortunately, what we know about starry stonewort would seem to fit into a Dixie cup, compared to all the issues that remain unknown. This is an atypical invasive in some ways, and there is a dearth of information about certain aspects of its biology. For example, in parts of Germany its population has fluctuated from near-nuisance levels to scarcity in just a few decades, with no management efforts. In the United Kingdom, starry stonewort is considered an endangered species, and in Sweden it is listed as “vulnerable.”

It is thought that the local infestation of starry stonewort originated from algae hitching a ride in Seaway shipping ballast water. Ship ballast water being purged at dockside. Photo: USGS

More so than other aquatic plants, it exhibits strong allelopathic tendencies; in fact, the terrestrial invasive garlic mustard came to mind while researching starry stonewort. Garlic mustard, if left alone, will die out from a given site in about a decade as a result of the toxins it exudes through its roots, but it is not known if N. obtusa behaves similarly. Starry stonewort is so good at poisoning the sediments in which it grows, it has been known to out-compete and replace other aquatic invasives like Eurasian watermilfoil, fanwort and curly pondweed. At least one researcher has suggested it should be considered as a biocontrol for other invasives, at least in its native range.

So far, the only cool thing about starry stonewort is its name. Beyond that, it is just another in a long line of invasive species that have come to us courtesy of international shipping, and one more reason to thoroughly drain and clean boats, live-wells, trailers and other equipment between water bodies. With another New York State fishing season underway, please help curb the spread of invasive species by cleaning all boats, trailers and gear before and after each launch, and disposing of bait responsibly. For more information on aquatic invasive species, go to sleloinvasives.org, or call your local Cornell Cooperative Extension office.