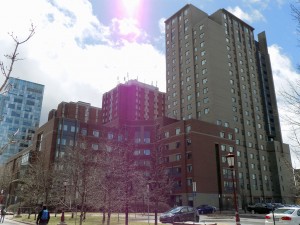 At some point in the next year, possessing marijuana for non-medicinal purposes will become legal in Canada.  The Cannabis Act was recently announced by the federal government.  If it is approved by Parliament and becomes law, anyone 18 and over will be able to possess up to 30 grams (just over one ounce) of cannabis for personal use, or to jointly share with others.  Users with a green thumb will also be able to legally grow four plants on their property, as long as they aren’t higher than one meter/three feet.  Making edible cannabis products will be allowed too.  A lot of the details surrounding the legalization plan are still hazy though.  Sales will be provincially regulated but each province still has to come up with a plan on how it will be done.  The effects of legalization are going to be felt by other agencies and organizations too.

The scent of smoking joints has never been well hidden on college campuses and in neighborhoods surrounding them.  Anyone who has lived in a dorm can easily smell or spot their neighbor who is “One Toke Over the Line,” to quote the Brewer and Shipley song from 1970.  Smoking tobacco in a college dorm is illegal in Ontario, but possession of it isn’t.  The average college freshman in Ontario is also 18 years old or will turn 18 during that year.  “It will pose a new challenge,” said Laura Storey, Director of Housing and Residence Life at Carleton University in Ottawa.  Storey said her office still needs to get a full understanding of what the new regulations will be, but added that the same rules about smoking tobacco in or near dorms will apply to smoking cannabis.  She said there has not been any discussion yet about if students will be able to keep plants in the rooms.  Storey said preparing for legal marijuana in college dorms is on the agenda at a conference being held in early May of university housing directors from across Ontario.  Calls to the Housing Service at the University of Ottawa were not answered. 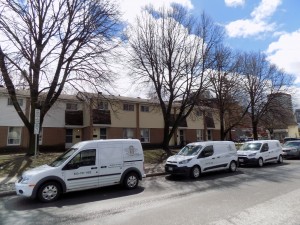 Ottawa Community Housing (OCH) is the city’s public housing authority. It owns and manages 15,000 units. Media Relations Coordinator Niki Kerimova said that their first priority is providing a safe and inclusive living environment for tenants. Tobacco and marijuana smoking is not permitted in OCH building. The only exceptions are for authorized medical marijuana users and indigenous people who use tobacco for spiritual purposes. OCH is taking a wait-and-see approach to any issues legal cannabis could present. Kerimova said the agency is going to “address it from both a policy and operational perspective” after the federal legislation becomes law.

Public housing facilities and college dorms are just two examples of places where legal cannabis in Canada could have effects. The whole idea of marijuana possession being allowed for just about every Canadian is going to be an interesting social experiment to observe for both users and refusers alike.