Subscribe
iTunesSpotifyGoogle PlayRSS
by James Morgan on May 4th, 2017 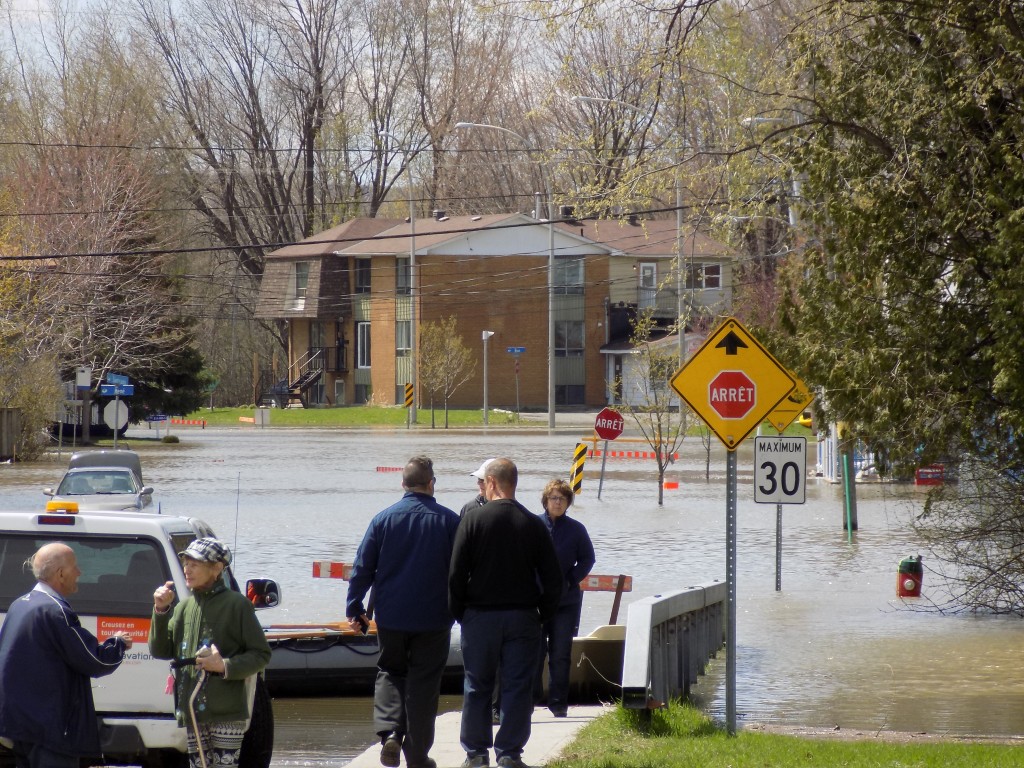 The flooding isn’t over in Gatineau, Quebec. Two weeks ago, the area where the Gatineau River enters the Ottawa River flooded. There was a brief reprieve and now things are more serious. Heavy rain in recent days has caused much of the neighborhood in the Pointe-Gatineau area to flood, leaving streets looking more like the canals of Venice by Wednesday morning.

According to the City of Gatineau, by 4:00 pm, 145 people from 82 homes had heeded the voluntary evacuation instruction and left. 80 people are staying at a disaster relief center set up by the Canadian Red Cross. However, some people are staying behind and hoping for the best with sandbags and pumps.

The interchange on Route 50 with St. Louis Street is closed. Nearby, under the Des Draveurs Bridge, the water depth was over 146 feet on Wednesday afternoon. The City of Gatineau is filling and distributing sandbags in riverfront neighborhoods and the transit authority is offering free shuttle service to affected residents. Utility companies are also on the scene in neighborhoods, ensuring power and gas service is safely disconnected.

Downstream, the Masson-Cumberland ferry shut down at 6:00 pm Wednesday because of flooding. It’s usually a busy passage for commuters between the Quebec and Ontario sides of the Ottawa River. Over 20,000 cubic feet per second of water was flowing out of the Ottawa River towards the St. Lawrence on Wednesday afternoon, according to the Ottawa River Regulation Planning Board.

There is already significant flooding in Montreal’s western suburbs. Water levels are expected to rise again due to rain in the forecast on Friday and through the weekend. Environment Canada says up to two inches could fall in some areas. However, the situation is expected to improve after that time—but it all depends on Mother Nature. 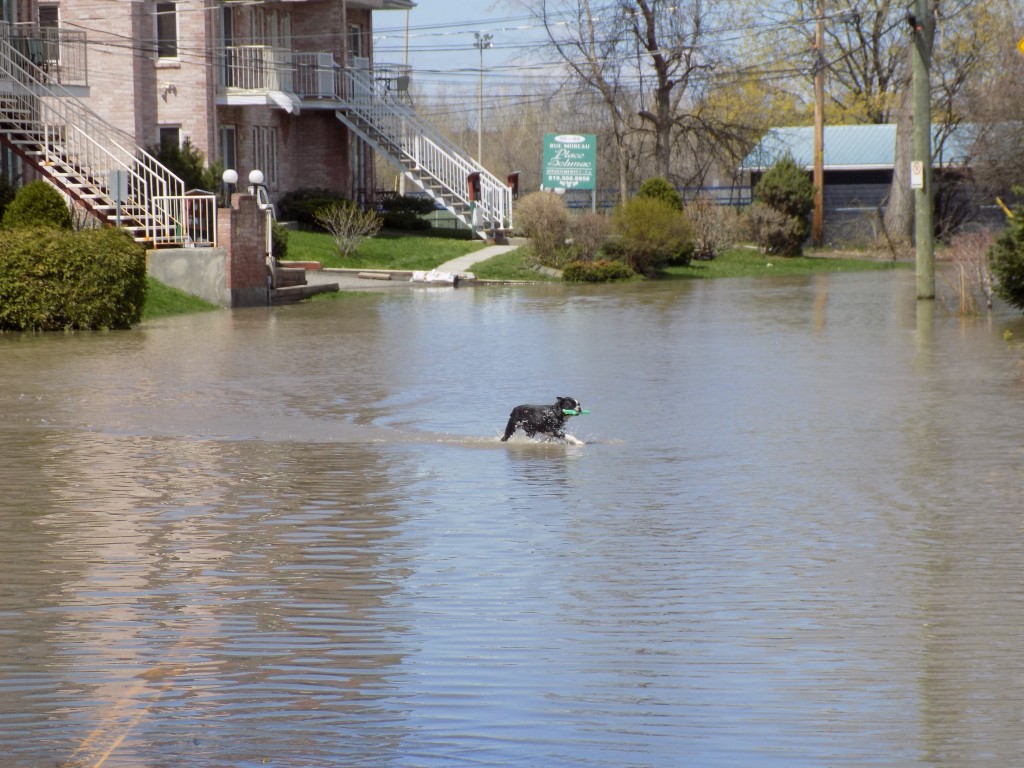 This dog was enjoying playing fetch in the water in front of its house on Moreau Street. Photo: James Morgan 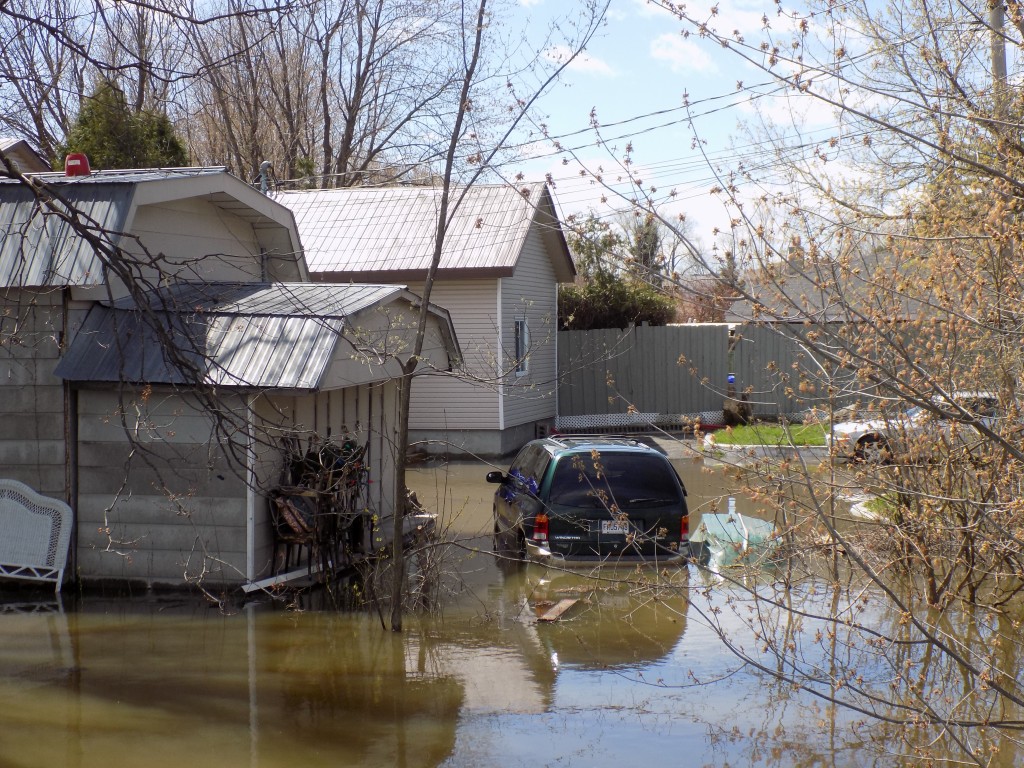 A flooded yard.  Ironically, the rowboat to the right of the minivan had been left upside down to keep rainwater out! Photo: James Morgan 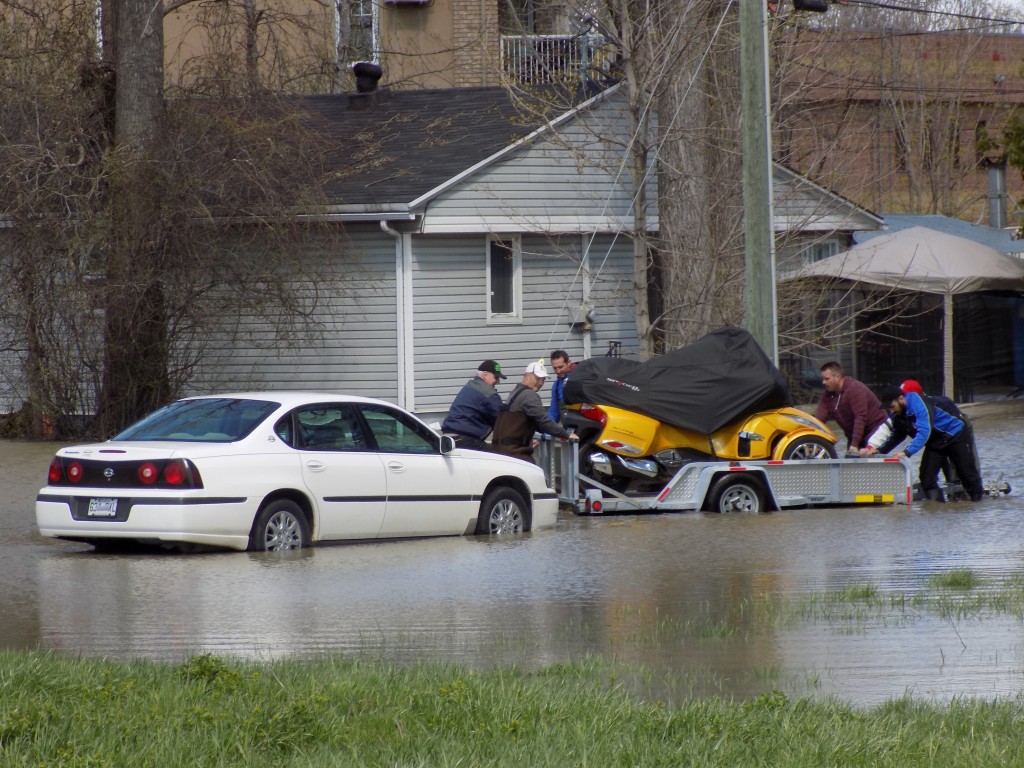 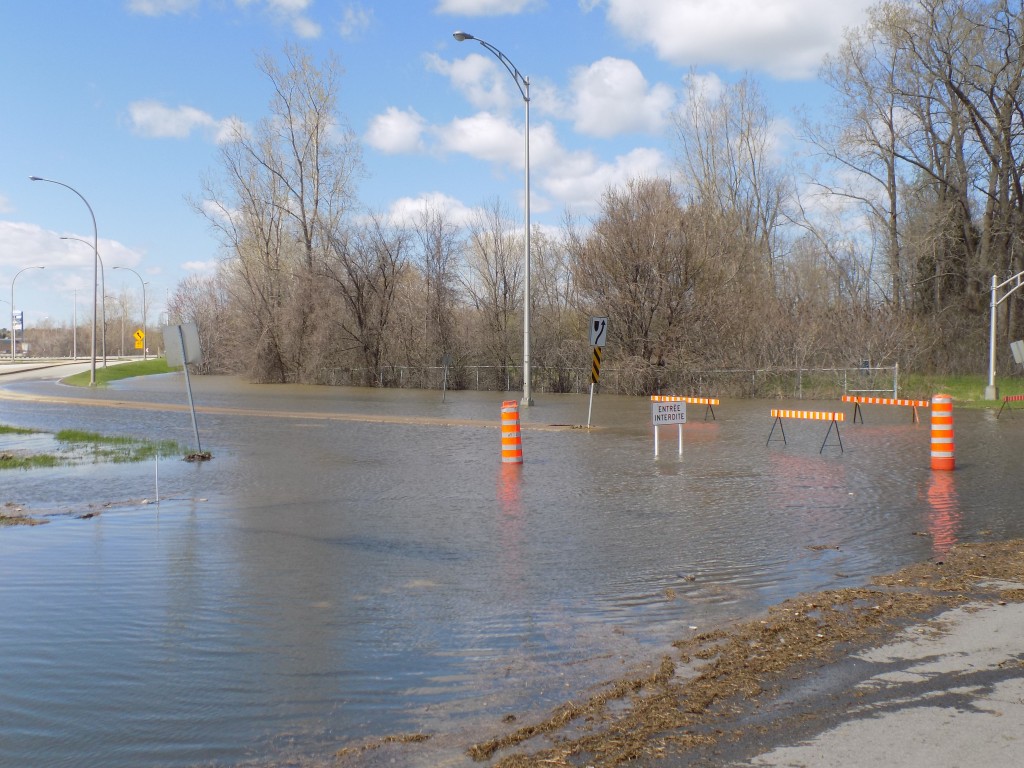 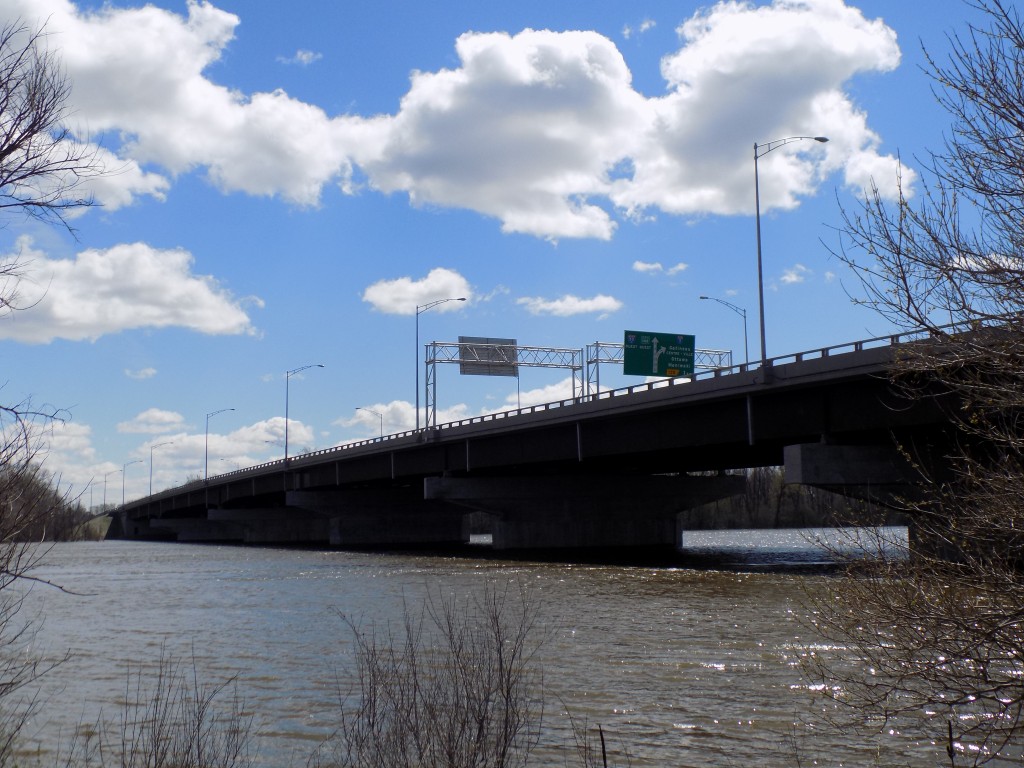 Route 50 crosses the Des Draveurs Bridge. Underneath, the Gatineau River was over 146 feet deep on Wednesday afternoon. Photo: James Morgan 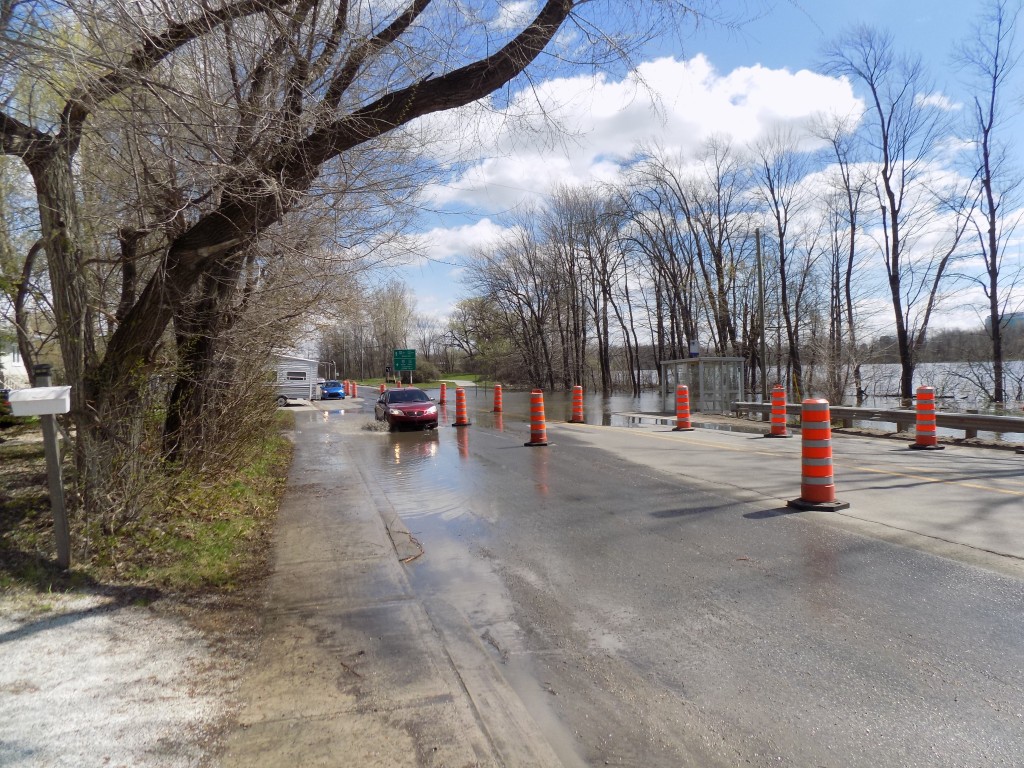 This section of St. Louis Street next to the Gatineau River was still open on Wednesday afternoon. Photo: James Morgan 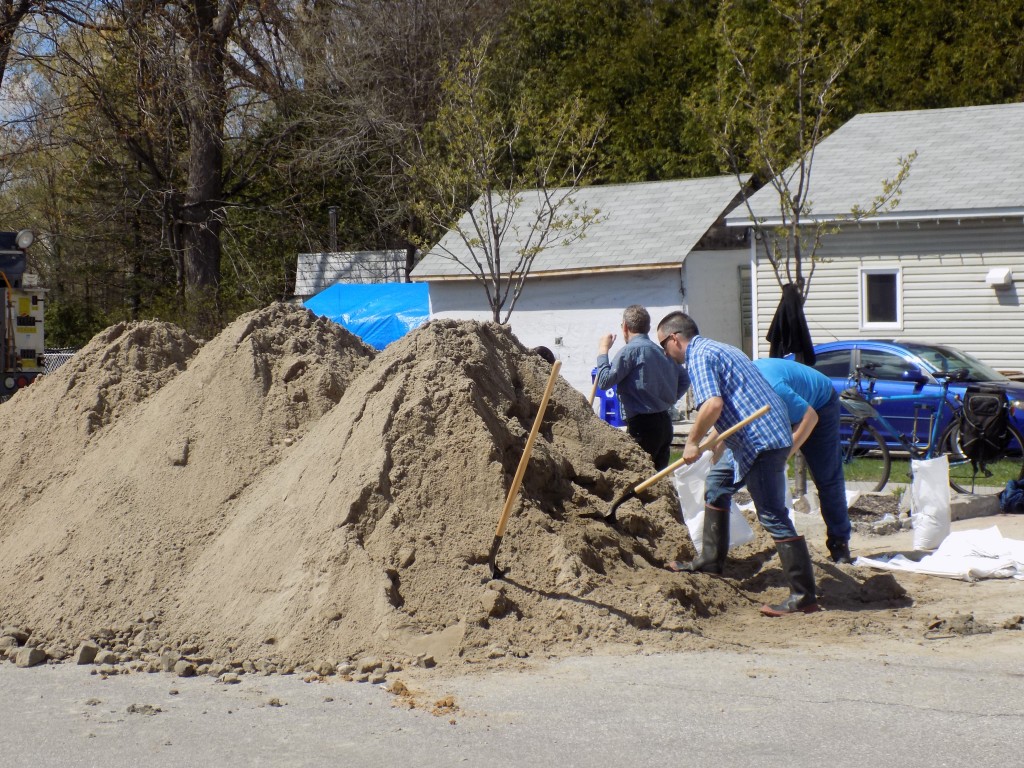 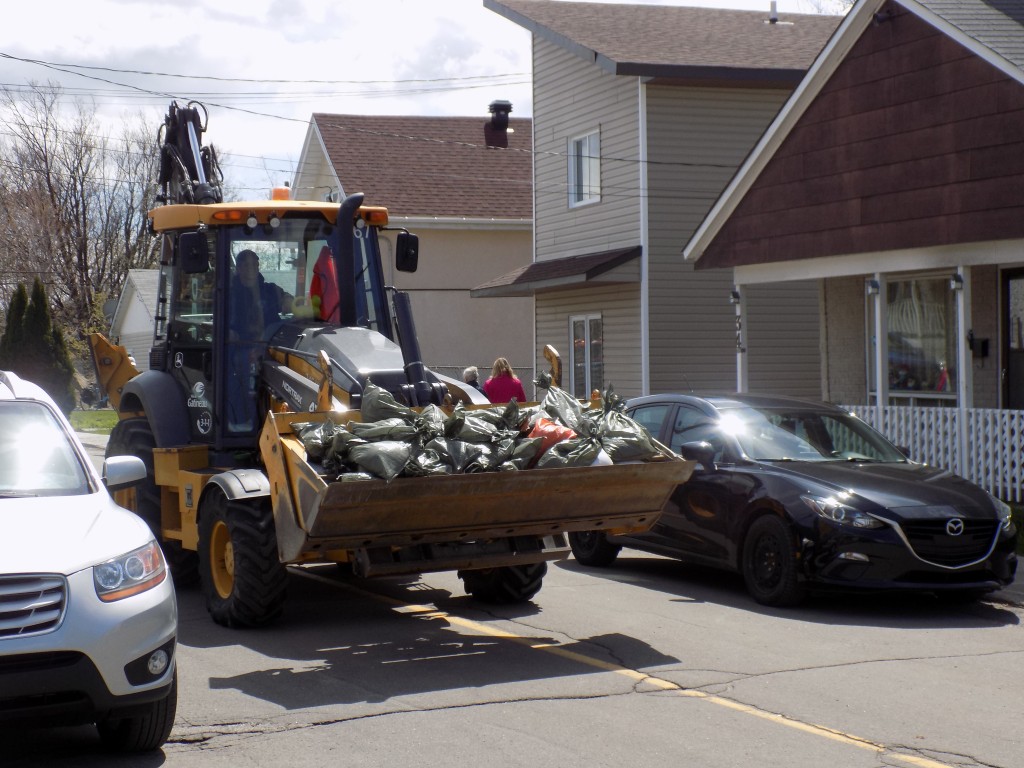 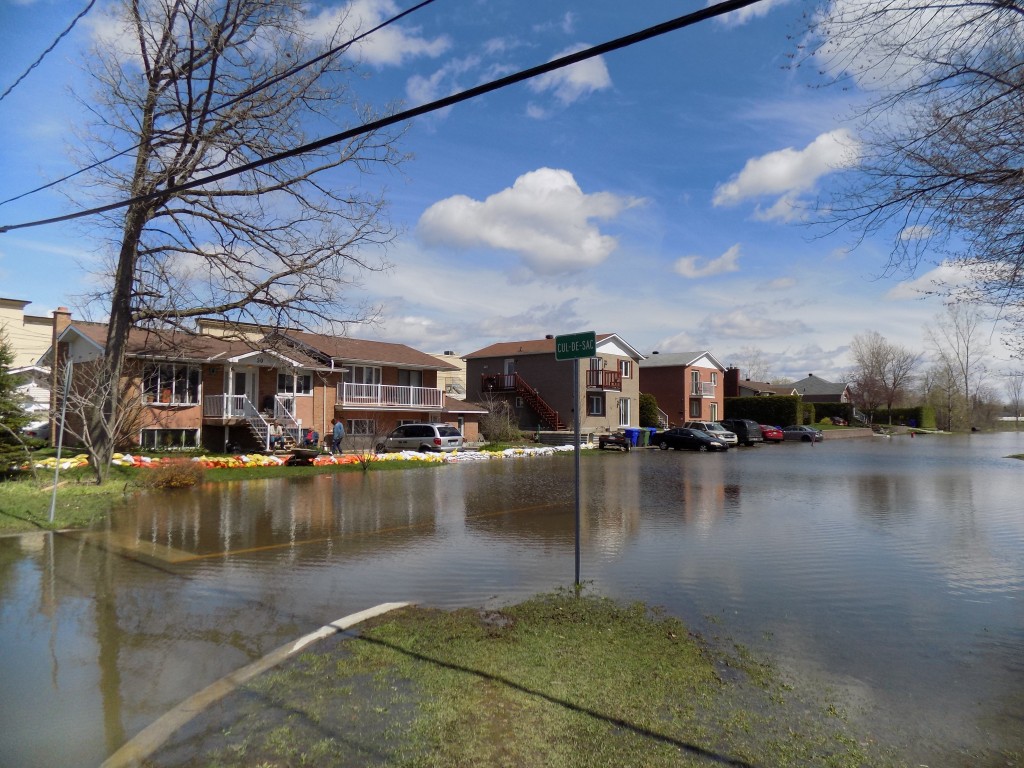 A house at the corner of Carmen Street and La Gappe Boulevard, surrounded with sandbags. The occupants relaxed on the front porch. Photo: James Morgan