If jumping to conclusions was a sport, I might have played pro. In my prime I went for the long jumps. Like concluding that since I had casually mentioned to my spouse that backyard chickens might be fun, she would not be upset when months later I came home with four dozen laying hens, plus a dog from the farmer where I got the chickens. Can’t say jumping to conclusions worked out real well for me, but we all dabble in it.

For example if you were to hear of a first-time Massachusetts politician with the last name Kennedy being sworn in to the U.S. House of Representatives, it would be normal to conclude she was related to Representative Joe Kennedy, who has served in the House since 2013. A reasonable jump, but there would be a chance it was erroneous. 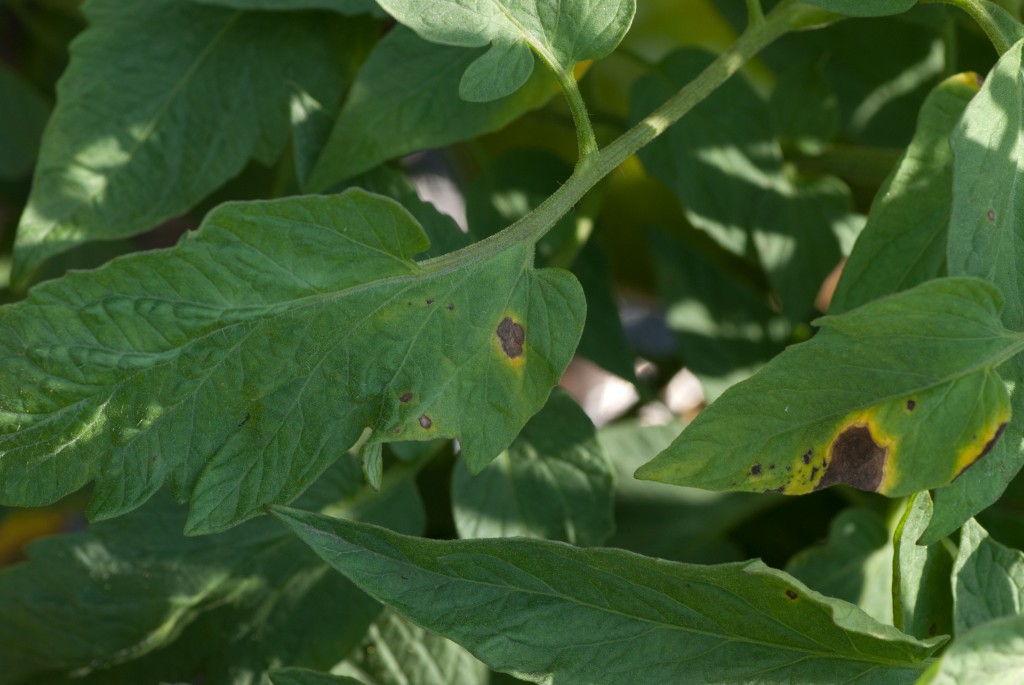 So gardeners can be forgiven for concluding that two diseases of tomatoes and potatoes, both having the same last name, are related. However, early blight is not related to late blight. Or urban blight for that matter.

Early blight spores reside in the soil of probably 99% of gardeners, and may be viable for 5 years. It is a very common, annual disease of tomatoes (potatoes to a lesser extent) that can come from seeds, transplants, or topsoil. Fortunately, most seed companies are getting hip to the fact that early blight spores cling to nice clean-looking seeds, and more suppliers are disinfecting tomato seeds. Early blight is the disease that starts at the bottom of a tomato plant and progresses up the vine. In wet years or if the soil has a buildup of spores it can be bad enough to kill plants, but usually it weakens the plant and reduces its yield slightly. And makes it look ugly.

The cool thing—OK, the less-bad thing about early blight is that you can manage it very effectively by tweaking the way you garden. The day you set out transplants in the garden is the day you begin to prevent early blight (and a similar-acting relative called Septoria spot). And the time is coming up soon.

The first thing to do is to space out more than you used to. All garden diseases are worse when leaves remain wet for long periods, and it has been getting wetter on average. According to weather monitoring stations across northern NY, we now get 3 inches more precipitation than we did in 1970. What worked for past generations may not work as well today. So leave more room between plants as well as rows so they have more access to sun and wind. If the tag or seed packet recommends spacing of 18-24 inches, go with the larger number. Speaking of wet, if you water all garden plants near the base instead of using a sprinkler, it can help reduce white mold on beans, powdery mildew on squash, and early blight.

Next, keep your dirt under cover. Given that tomato leaves have to contact soil to become infected, mulching right up to the stem of each plant can break this cycle. Some use black plastic, but I prefer some king of organic matter because it enriches the soil in addition to conserving water, killing weeds, and mitigating diseases. Old hay, straw, or aged wood chips are all good. Free or cheap mulch is the best kind.

Wooden stakes kill vampires, allegedly, but any kind of stake helps kill early blight. It just has to be strong. Tie up tomato plants as they grow. Pruning kind of goes along with staking, because when you are tying up your tomatoes you can pinch off the side shoots (sucker stems) that arise at the base of each leaf. Doing this will create a single stem, like a pine tree. Except not quite as thick. It will also give you larger fruit that begin to ripen earlier. Cages can be OK, as long as you prune the vines. 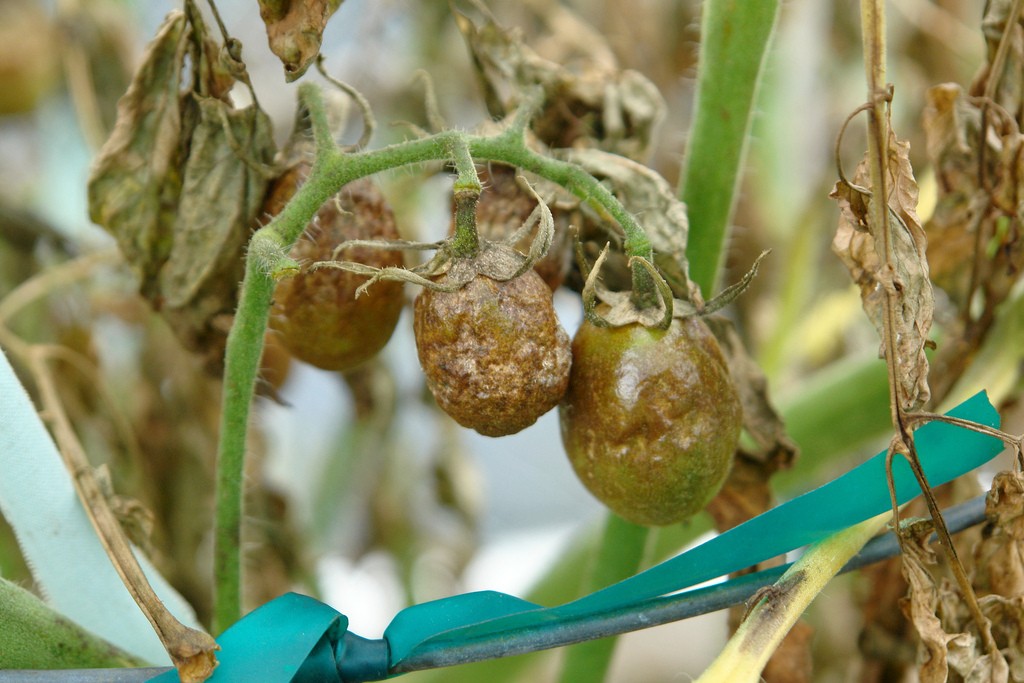 Garden hygiene is important, too. Ideally, takes and cages should be disinfected with a 10% bleach solution and left to dry in the sun. Composting is important—as in, don’t do it. Tomato and potato vines should not go in your compost bin because that perpetuates and accelerates the disease cycle. A separate pile for the vines is fine, but use that compost around flowers or trees.

Late blight (Phytophthora infestans) is a much more destructive disease, and differs from early blight in essential ways. Its spores do not survive in the soil—they blow in from southern states, often when the remnants of a tropical storm sweep our way, so you can’t prevent them from landing on your garden. But late blight needs wet leaves to get started and to spread, so things like increased spacing, using stakes, and pruning can help plants dry out sooner. Managing late blight is done mid-season, and really needs someone to write a separate article. If you conclude that I plan to do this, you would be right.