Subscribe
iTunesSpotifyGoogle PlayRSS
by James Morgan on May 6th, 2017 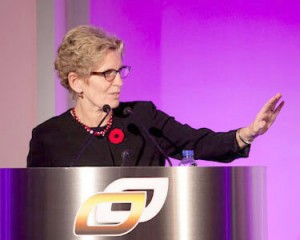 Poverty and income inequality are big topics of concern these days. The Ontario government recently announced plans to test out a new basic income program in selected towns and cities across the province. Premier Kathleen Wynne announced the plan in the southern Ontario city of Hamilton, one of the four test locations. The other places are Brantford and Brant County in southern Ontario, Lindsay in central Ontario, and Thunder Bay, far in the northwest, closer to Minneapolis than Toronto.

Under the three-year trial program, selected individuals will receive nearly $17,000 per year. Couples will receive just over $24,000. Individuals who qualify that also earn a wage will have an amount equal to 50% of their earned income subtracted from the minimum amount they get from the province. People with identified disabilities will receive an additional $6,000 per year. Those who receive welfare or provincial disability support pensions that qualify for the new program will still receive provincial prescription drug and dental insurance. The government is also developing a minimum income plan for indigenous people. 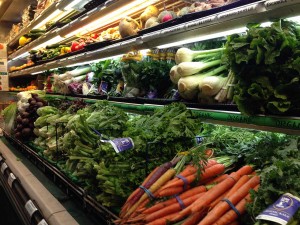 Ottawa is not one of the test sites for the basic income program, but Michael Maidment, the Executive Director of the Ottawa Food Bank is pleased with the province’s plan and hopes it is eventually expanded. He participated in the consultations the Ontario government held while developing the program and is interested to see if it improves food security for low-income earners. Maidment said a basic income would make it much easier for people to afford fruits and vegetables.

Food Stamp programs don’t exist in Canada, so food banks (commonly called food pantries in the US), are where many low-income people go if they cannot afford to buy groceries. Maidment said a basic income will likely reduce demand for food banks. He said that existing social welfare programs are not effective at keeping people out of poverty. 65% of Ottawa Food Bank users are on social assistance. Maidment said the average person receiving welfare in Ottawa gets $765 a month. Rent for the average bachelor apartment is $801, the average monthly food cost is $291, leaving a shortfall of $324, and that’s without counting expenses for things like utilities and transportation.

The Basic Income Canada Network has been lobbying strongly for a basic minimum income. Social welfare is often considered a liberal, left-wing cause, but some of the biggest promoters of the basic income idea are conservatives. Hugh Segal, a former member of the Canadian Senate who was on the staff of former conservative Prime Ministers and an Ontario Premier, was selected by Premier Wynne, a Liberal, to be the Special Advisor for the program being tested in Ontario. Basic Income Canada wants support from all provinces and political parties for an eventual national program.

Ontario is not the first place in Canada to try a minimum income. The Manitoba government joined with the federal government from 1974 to 1978 and 40% of eligible residents in the town of Dauphin for a test program. However, data collection was expensive, participants dropped out, and results were not analyzed while the program was taking place to see if it was having any benefits. Things are being done differently in Ontario this time. The data will be carefully analyzed as it arrives to see if a basic income is benefitting the people who receive it. Those results will determine if the program is expanded.