Just in time for summer reading, area librarians have pooled their expertise to make some recommendations around the theme of spy stories. The perfect beach reading. As always, big thanks to Norwood Public Library’s Rebecca Donnelly for pulling this together.

Back Channel by Stephen L. Carter (2014)
College is always a time of change and, for many, uncertainty.  Add in the Cuba Missile Crisis and a demand from chess savant Bobby Fischer, and Margo Jensen will be swept far away from her sophomore year at Cornell.  Margo becomes the back channel by which John F. Kennedy negotiates with Soviet Premier Nikita Khrushchev.  All of the U.S. and Soviet espionage agencies make an appearance.  McGeorge Bundy, the national security adviser, thinks “A committee is like crabgrass…it sits forever, swaying with every breeze, and is impossible to eliminate once it takes root.”  The tactics and policies used during the Crisis come to life and someone sits behind it all, pulling strings.  While the actual back channel was an ABC News journalist, this novel shines with Margo and JFK’s meetings and her time behind the Iron Curtain with Bobby. — Edward Elsner, Oswego Public Library

The Black Widow by Daniel Silva (2016)
Gabriel Allon, the art restorer, spy, and assassin described as the most compelling fictional creation “since Ian Fleming put down his martini and invented James Bond” (Rocky Mountain News), is poised to become the chief of Israel’s secret intelligence service. But on the eve of his promotion, events conspire to lure him into the field for one final operation. ISIS has detonated a massive bomb in the Marais district of Paris, and a desperate French government wants Gabriel to eliminate the man responsible before he can strike again.  — Rebecca Donnelly, Norwood Public Library 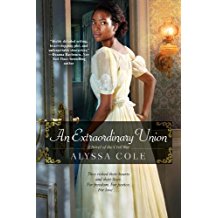 An Extraordinary Union by Alyssa Cole (2017)

As the Civil War rages between the states, a courageous pair of spies plunge fearlessly into a maelstrom of ignorance, deceit, and danger, combining their unique skills to alter the course of history and break the chains of the past… Elle Burns is a former slave with a passion for justice and an eidetic memory. Trading in her life of freedom in Massachusetts, she returns to the indignity of slavery in the South to spy for the Union Army. Malcolm McCall is a detective for Pinkerton’s Secret Service. Subterfuge is his calling, but he’s facing his deadliest mission yet–risking his life to infiltrate a Rebel enclave in Virginia. Two undercover agents who share a common cause–and an undeniable attraction–Malcolm and Elle join forces when they discover a plot that could turn the tide of the war in the Confederacy’s favor. Caught in a tightening web of wartime intrigue, and fighting a fiery and forbidden love, Malcolm and Elle must make their boldest move to preserve the Union at any cost–even if it means losing each other… — Rebecca Donnelly, Norwood Public Library
The Notorious Pagan Jones, by Nina Berry. (2015)

“Pagan Jones went from America’s sweetheart to fallen angel in one fateful night in 1960: the night a car accident killed her whole family. Pagan was behind the wheel and driving drunk. Nine months later, she’s stuck in the Lighthouse Reformatory for Wayward Girls and tortured by her guilt–not to mention the sadistic Miss Edwards, who takes special delight in humiliating the once-great Pagan Jones. But all of that is about to change. Pagan’s old agent shows up with a mysterious studio executive, Devin Black, and an offer. Pagan will be released from juvenile detention if she accepts a juicy role in a comedy directed by award-winning director Bennie Wexler. The shoot starts in West Berlin in just three days. If Pagan’s going to do it, she has to decide fast–and she has to agree to a court-appointed ‘guardian,’ the handsome yet infuriating Devin, who’s too young, too smooth and too sophisticated to be some studio flack. The offer’s too good to be true, Berlin’s in turmoil and Devin Black knows way too much about her–there’s definitely something fishy going on. But if anyone can take on a divided city, a scheming guardian and the criticism of a world that once adored her, it’s the notorious Pagan Jones. What could go wrong?” (Description from Goodreads.)

No list of spy stories is complete without le Carre. The Guardian commends The Tailor of Panama “for laying bare the uneasy marriage between, on the one hand, spycraft and all its deceptions, and the mission of spying, on the other, which is to establish the truth of things.” Le Carre’s post-Cold War spy novel, his first set in the Americas, stretches the limits of the genre as Harry Pendel, a tailor blackmailed into informing on his powerful customers, begins to make up the sort of lies he believes his British intelligence handlers want to hear.  — Rebecca Donnelly, Norwood Public Library 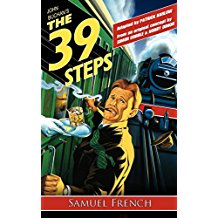 This British spy classic, listed as one of the top spy novel of all time by the Guardian, puts “ordinary fellow” Richard Hannay at the center of a German espionage plot after a chance meeting with a man who ends up dead in Hannay’s own London flat. Following clues from the man’s notebook, Hannay must elude the spy ring known as the Black Stone to prevent a plot that threatens the future of Europe. The Thirty-Nine Steps has been adapted for radio, TV, and film, including in 1935 by Alfred Hitchcock. — Rebecca Donnelly, Norwood Public Library

George Washington’s Secret Six: The Spy Ring That Saved the American Revolution by Brian Kilmeade (2013)
When General George Washington beat a hasty retreat from New York City in August 1776, many thought the American Revolution might soon be over. Instead, Washington rallied–thanks in large part to a little-known, top-secret group called the Culper Spy Ring. Washington realized that he couldn’t beat the British with military might, so he recruited a sophisticated and deeply secretive intelligence network to infiltrate New York. So carefully guarded were the members’ identities that one spy’s name was not uncovered until the twentieth century, and one remains unknown today. But by now, historians have discovered enough information about the ring’s activities to piece together evidence that these six individuals turned the tide of the war. Here, these spies finally take their place among the pantheon of heroes of the American Revolution.

A Spy Among Friends:Kim Philby’s Great Betrayal by Ben Macintyre (2014)

The most infamous spy in recent history, Kim Philby was a graduate of Cambridge University, a fan of cricket, the head of Cold War British intelligence–and a double agent for the Soviet Union. Philby’s betrayal led countless intelligence agents and operative to their deaths as the information he gave his Russian handlers scuttled major British and American intelligence operations. 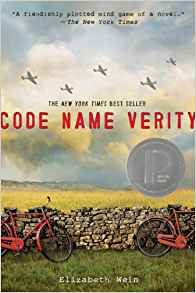 A captured spy known as “Verity” tells her story to Nazi interrogators in this work of historical fiction. Her confession largely features her friendship with teen pilot Maddie, and how they came to occupied France in 1943. Marketed as Young Adult Fiction, Code Name Verity is a dark novel exploring the bonds of friendship under fire, and the roles of women during World War II. This novel stays with the reader, long after the final page has been turned.  — Amanda Jones, Canton Free Library

In an alternate England of 1851, spirited fourteen-year-old Sophronia is enrolled in a finishing school where, she is suprised to learn, lessons include not only the fine arts of dance, dress, and etiquette, but also diversion, deceit, and espionage. — Krista Briggs, Young Adult Services Specialist, Canton Free Library

The Boys Who Challenged Hitler: Knud Pedersen and the Churchill Club by Phillip Hoose (2015)

At the outset of World War II, Denmark did not resist German occupation. Deeply ashamed of his nation’s leaders, fifteen-year-old Knud Pedersen resolved with his brother and a handful of schoolmates to take action against the Nazis if the adults would not. Naming their secret club after the fiery British leader, the young patriots in the Churchill Club committed countless acts of sabotage, infuriating the Germans, who eventually had the boys tracked down and arrested. But their efforts were not in vain: the boys’ exploits and eventual imprisonment helped spark a full-blown Danish resistance.

On June 1, 1862, Thaddeus Lowe floated above a fierce Civil War battle in a silk hydrogen balloon. From the wicker basket dangling a thousand feet above ground, he telegraphed a message to Northern generals on the ground: Union troops were finally driving back the Confederate forces. Lowe’s message was transmitted to the War Department in Washington, where President Abraham Lincoln read his flying spy’s good news with relief. For two years during the Civil War, a corps of balloonists led by Thaddeus Lowe spied on the Confederate army. They counted rebel soldiers, detected troop movement, and directed artillery fire against enemy positions. Lowe and his aeronauts provide valuable intelligence to the Union army, even after the balloons became targets of Confederate shooters and saboteurs. 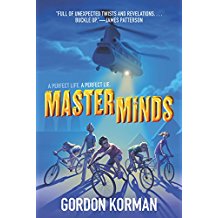 “Eli Frieden lives in the most perfect town in the world: Serenity, New Mexico. In this idyllic place, every lawn is perfectly manicured and everyone has a pool and a tree house. Honesty and integrity are valued above all else. The thirty kids who live there never lie – they know it’s a short leap from that to the awful problems of other, less fortunate places. — Rebecca Donnelly, Norwood Public Library

Eli has never left Serenity… why would he ever want to? Then one day he bikes to the edge of the city limits and something so crazy and unexpected happens, it changes everything. Eli convinces his friends to help him investigate further, and soon it becomes clear that nothing is as it seems in Serenity. The clues mount to reveal a shocking discovery, connecting their ideal crime-free community to some of the greatest criminal masterminds ever known. The kids realize they can trust no one – least of all their own parents…”This is the first book in a thrilling new series from bestselling (noncriminal) mastermind Gordon Korman.” — from book jacket

One of my favorite things about this book is the ‘umph’ of the story. As a reader, you really get to know what’s it’s like to live in such an idyllic community. The picture you get in your mind is perfectly clear! At the same time, the story is full of action. It continues to build and unfold to a point where you can’t put it down – you just have to know what happens next! — Ashley Pickett, Flower Memorial Library

“On a cross-country vacation with their parents, twins Coke and Pepsi, soon to be thirteen, fend off strange assassins as they try to come to terms with their being part of a top-secret government organization known as The Genius Files.” — from library catalog

This book is the perfect fit for the child who is looking for a fun, light mystery. The author makes a point of involving landmarks and events that seem so silly that they couldn’t possibly exist in real life, which helps take the story to a level that is comfortable for an advanced reader who is looking for less mature content. A fun read for our elementary school students! — Ashley Pickett, Flower Memorial Library 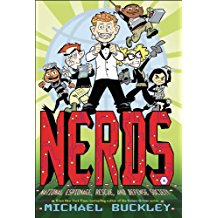 While running a spy network from their elementary school, five unpopular misfits combine their enhanced abilities and use cutting-edge gadgetry to fight evil around the world. — Rebecca Donnelly, Norwood Public Library 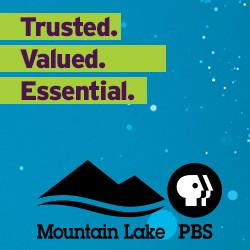