I am always willing to learn something new, even from the most unlikely person or event. Wait, that’s a lie. I can on occasion be a closed-minded, arrogant jerk, quick to pass judgment on the probable value of an encounter. But I’m trying to improve. At being humble, that is—the other comes naturally.

A case in point is the way I learned the origin of moss. A while back, a gentleman phoned the office for advice on controlling the stuff. As I reached for a fact sheet, he asked if I knew what was responsible for his moss problem. In the same breath, he gave the answer: environmentalists. Yep, environmentalists cause moss. Because, he explained, we never used to have beavers. 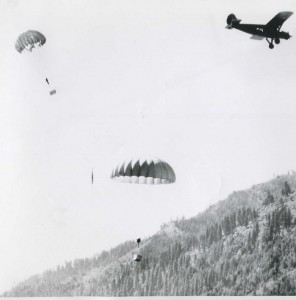 Beavers in wooden boxes drop from a plane into the Frank Church Wilderness in 1948 to start a new life. Photo: Idaho Fish and Game Dept.

This is where my closed-mindedness kicked in. While I respect the time-honored tradition of blaming environmentalists for just about anything, beavers are without question native to North America. Not to mention that this was a whopping non-sequitur.

The man went on to tell me how environmentalists rounded up European beavers and flew them back here in “special chartered jets.” The invading beavers were then “dropped all over the place,” hopefully with a parachute or at least some bubble wrap or foam padding, and they went right to work making ponds. As a result of more open water, the air is now more humid and we have more moss.

With the jarring appearance of logic at the end of his tale, my smugness disappeared. OK, at least it dropped a notch. For several years I had been tallying the length of wet periods, because it seemed like we had joined the weather-of-the-month club—if it got dry, it stayed dry; soggy and it remained that way. There were more calls about foliar diseases of trees and crops, disorders which thrived in damp weather, but I had not thought about the effect on moss. Maybe the caller had a point in the midst of an otherwise fantastic story.

My compulsive counting showed long wet periods in most summers between 2000 and 2010. In fact we logged roughly 25 consecutive days of measurable rain in a couple of seasons, and most summers had multiple rainy bouts of ten days or more. Eventually I realized that others were collecting this data, and doing a better job—the national weather service. Who knew? According to weather-reporting stations across northern NY, we now get about three more inches of precipitation per year than we did in 1970. And partly as a result, we do have more moss. A 2014 fact sheet from Cornell Cooperative Extension of Suffolk County states that “Mosses are an increasing problem, currently flirting with invasive plant status in NY.” 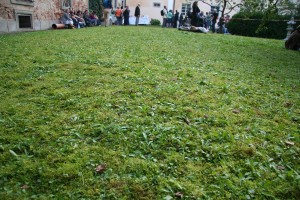 Conventional wisdom used to be that moss grew on acid soils. This is sort of true, but mostly not, as moss will grow on a pile of wood ashes, too. The issue is that grass is fussy and moss isn’t. In soils which are either too acidic—a pH of 6.0 or lower, or too alkaline—a pH of about 7.5 or higher, grasses have a hard time getting nutrients due to chemical changes in the soil. When grasses struggle for any reason, including pH imbalance, moss can move in.

Other factors which weaken grasses and allow moss to thrive include close mowing, removal of grass clippings, poor soil drainage, too much shade, lawn grubs, compaction, and excess moisture. No matter what you do to moss, it will come back if these problems persist. To quote from that Suffolk Co. fact sheet again, “Long-term moss control is impossible unless these conditions are corrected!” I would like to point out that this is the only exclamation point in the document, as well as the only use of italics.

Controlling moss requires a multi-pronged approach. As mentioned, the most important thing is to change the site conditions. At the very least, get a soil pH test, but preferably a full lab nutrient analysis. Except for professional-grade meters which are calibrated daily, pH meters tend to give unreliable and varied results. Most Cornell Cooperative Extension offices offer soil pH tests for a nominal fee, and staff can help advise you on a lab test if you so choose. You may have to add amendments to change the pH, or fertilizers to improve fertility. Never add lime or fertilizers (except nitrogen) unless a soil test indicates it is needed. And don’t run with scissors, either. 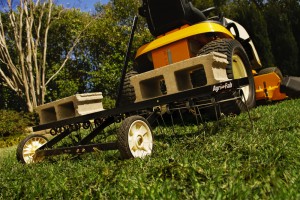 A vigorous spring (never fall) de-thatching will remove most of the moss. After that, there are some low-toxicity chemicals which can help kill what remains. From the Cornell fact sheet:

“Iron compounds are highly effective moss killers in turf. They work quickly, and the iron stimulates a “green-up” of turf. Complete fertilizers with iron efficiently remove moss and stimulate grass growth, which improves turf appearance. Iron will stain concrete and other surfaces, so it must be applied carefully. The key to effective control with iron is thorough coverage of moss foliage. Liquid materials are very effective and give almost instant results…more effective than granular products.

Cryptocidal soaps are relatively new chemicals for moss control…tend to bleach the moss to a whitish yellow, in contrast to the dark brown of moss treated with iron. Soaps are safe on sidewalks and other structures.

Copper and zinc will remove moss on roofs and walks…Unfortunately, these elements can injure desirable turf grasses.”

If it is shady, you may have to either cut down some trees or make peace with moss. Consider using mulch or a shade-tolerant ground cover in shady areas rather than struggling to maintain grass there. If you water, do so only in the morning. Adjust your mower height to 4 inches, probably the highest setting. Not only will this fight moss, you will have fewer weed and turfgrass disease problems. And if all else fails, try keeping environmentalists off your lawn.

5 Comments on “An unlikely explanation for beavers, and how to keep moss at bay”