Some stories are good-news, bad-news, and others are all bad news. In my line of work there are far too many of the latter. Science may have proven the moon is not made of green cheese, but I wish to present evidence that the sky may well be composed of rubber, or at least elastic. Unfortunately it is true the sky is falling, but research suggests that in many cases, it is going to bounce rather than crash. 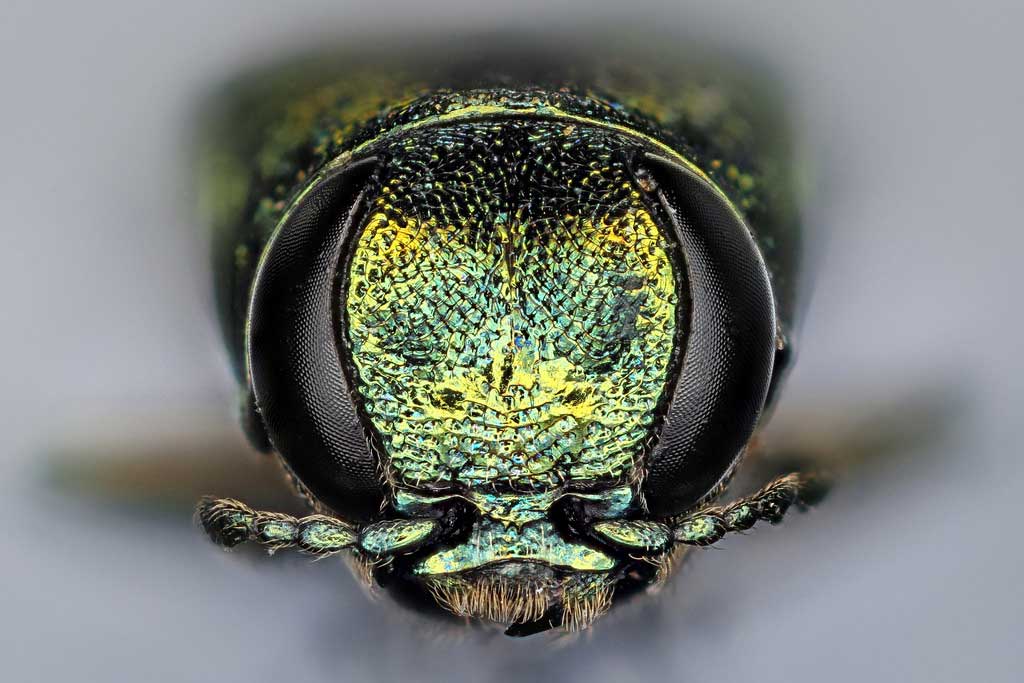 Emerald ash borer. This pricey import may cost us billions, but we might be able to import his nemesis. Photo: Macroscopic Solutions, Creative Commons, some rights reserved

Consider the emerald ash borer (EAB), which used to come free inside packages of Chinese auto parts. Detroit was probably hoping for a cool decoder ring in every crate of brake pads or whatever, but they got that instead. While the EAB is very shiny and sparkly, it makes a lousy pet, mostly because it has murderous designs on our ash trees.

Apparently we have 900 million ash trees in New York State, though I bet the person tallying them lost count once or twice, so who knows, really. The point is, there are tons of them, and though we can save a limited number through chemical treatments, the bulk of them are toast, which is a drag to say the least. Worse yet, there has been concern that we might never again have ash in our forests, and that entire species of ash could be lost forever. 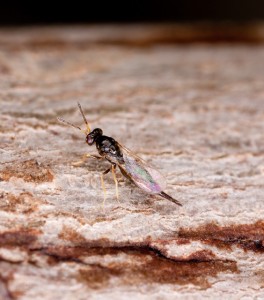 Now the good news. For one, the chemicals being used to save specimen ash trees are working better than was expected. But that is nothing compared to other recent discoveries. It’s not a common refrain, but I say thank heaven for parasites. Parasitoids to be exact; tiny critters, mostly from China, that lay eggs in EAB larvae and pupae. The parasitoid babies grow up inside emerald ash borers, and kill them.

In the past, the problem had often been that supposed “good” bugs we brought from other continents secretly loved to cause havoc. We need to make sure the parasitoids we import do not also kill monarch butterflies or something like that. So it takes a long time to screen them. But over the past few years, many more “white hat” bugs have been approved, and there is real hope that in the long run, EAB will be controlled much the way purple loosestrife is now managed.

The lilies of the field neither toil nor spin, but these days they do not grow very well in northern NY because of the lily leaf beetle. Very likely we did not start out with 900 million lilies, but we have a lot fewer now, thanks to this bright red, invasive European pest. It has been in North America since 1943, but did not discover New York State until around 2001, undoubtedly the same year it got Google Maps on its mobile device. 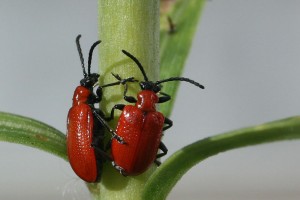 The lily-leaf beetle is a full service menace, eating the leaves, stems, buds, and flowers of members of the lily family. Photo: Charlesjsharp, Creative Commons, some rights reserved

If a Japanese beetle attacks your rose bush while you are at the office, you can still find your rose when you come home. The lily leaf beetle is more like some full-service tree contractor that removes the tree, then grinds out the stump and plants sod before the crew leaves. If this insect gets a hold of your lily while you are out, you’re not going to find where the flower was unless you GPS-tagged the roots when you planted it. They don’t leave until the job’s done.

We are very fortunate to have a northern NY resident who hates the sound of collective hand-wringing made by flower gardeners who have lost their precious lilies to invasive lily beetles. Dr. Paul Siskind of Potsdam dislikes that sound so much that he embarked on a research project to identify the best way to control the beetle using natural products.

Dr. Siskind will present his findings in Massena on Wednesday, July 12 at the Massena Nature Center in Robert Moses State Park as part of an Invasive Species Awareness Workshop. Other presenters will discuss the latest research on EAB biocontrol, and how to beat the spotted-wing Drosophila. A local Certified Arborist will talk about ash tree treatment options, among many good-news, bad-news topics.

2 Comments on “Invasives are bad news, but there’s a little good news, too”