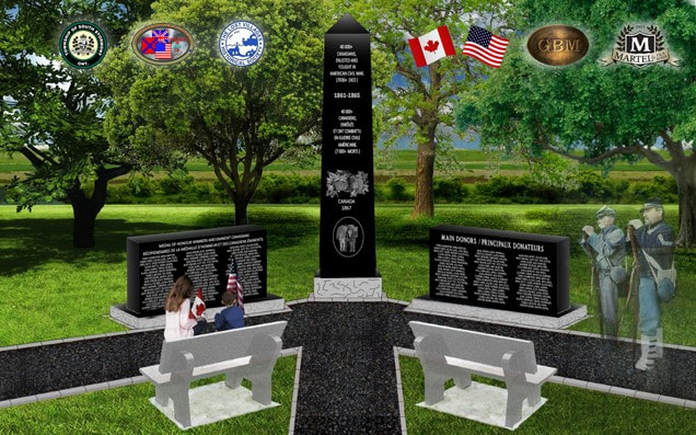 What the Civil War monument at Ault Park near Cornwall will look like when complete. From the Grays and Blues of Montreal website.

It’s a little known fact in the U.S. that more than 40,000 Canadians fought on both the Union and Confederate sides in the American Civil War.  A monument being built in their memory near Cornwall comes at a time of political violence and unrest over the removal of a statue of Confederate General Robert E. Lee in Charlottesville, Virginia, and over the removal of other Confederacy monuments around the U.S.

“An untold story in Canadian history”

The monument, which differs from most in the U.S. by drawing no distinction between those who served on which side, is being built at the Lost Villages Museum, operated by the Lost Villages Historical Society at Ault Park on Highway 2 east of Cornwall. The Grays and Blues of Montreal, a Civil War commemorative and re-enactment club from Montreal is behind the effort. The organization portrays the 4th Vermont Volunteers of the United States and the 27th Volunteer Virginia Infantry of the Confederate States. 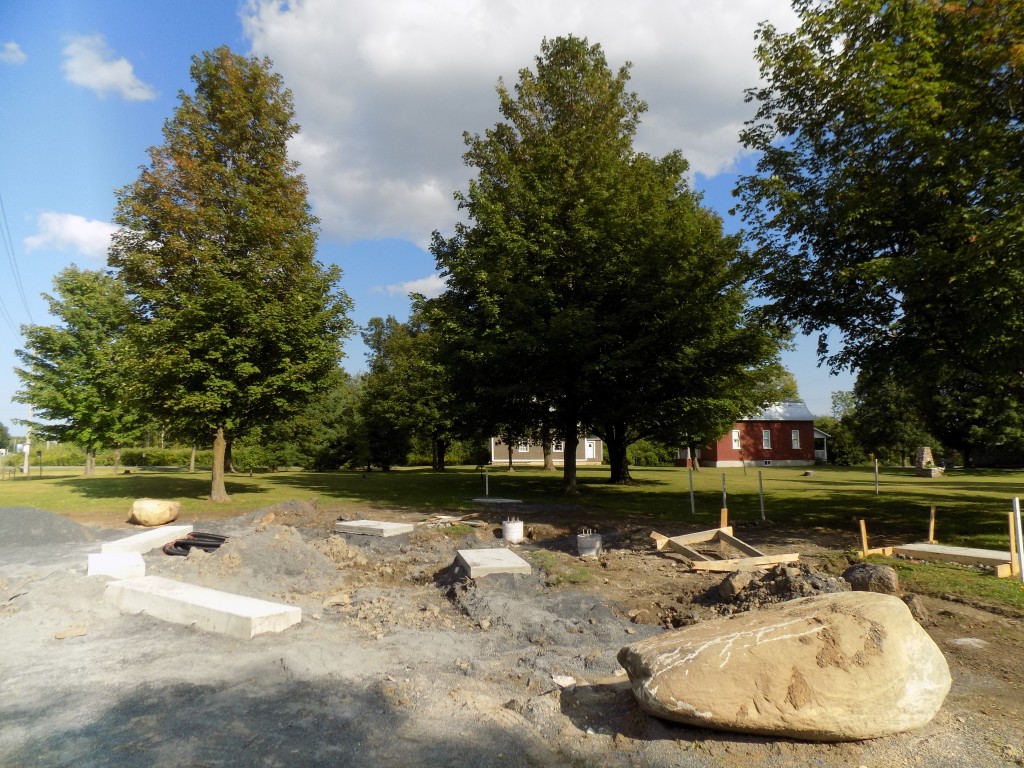 The monument under construction with buildings from the Lost Villages in the background. Photo: James Morgan

The Grays and Blues approached South Stormont Township Council and the Lost Villages Historical Society in autumn 2013 about building the monument at Ault Park, home to buildings and exhibits commemorating the Ontario villages inundated by flooding when the St. Lawrence Seaway was built.

Jim Brownell is President of the historical society and co-chair of the monument project. He said the location makes sense because the Grays and Blues wanted the monument to be located close to the U.S. border.

Asked if there was any controversy during the discussions about allowing the monument to be built, his answer was “Absolutely not!  This was an untold story in Canadian history and we were pleased to have an opportunity to help this re-enactment group.” Brownell said South Stormont Council was totally supportive and visitors to the museum have expressed their support, with some even making donations to the monument project. 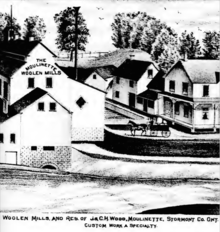 Woolen mill and home of J. and C.H. Wood in Moulinette. Union Pvt. William Ellis was from the village. Photo: Illustrated historical atlas of the counties of Stormont, Dundas and Glengarry, Ont.

Family ties to the Lost Villages

There are family ties between the Union side of the Civil War and the Lost Villages. Private William Ellis served in the 10th Infantry, Company C from Connecticut. He was from the former village of Moulinette.

I.R. Ault’s home and store in Aultsville. Union Cpl. George Cross was from the village. Photo: Illustrated historical atlas of the counties of Stormont, Dundas and Glengarry, Ont.

Corporal George Cross of the former village of Aultsville was in Company K of the New York Volunteer Infantry. William Ellis’ granddaughter, 96 year-old Emma Hollingsworth (nee Ellis) has been an enthusiastic supporter of the monument. In 2015, she took the ceremonial salute at a re-enactment held at Ault Park. Two of her great-granddaughters are also granddaughters to Jim Brownell.

If monuments are statements, what does this one say?

“We are not commemorating the Civil War,” said Brownell, noting that the monument is instead a dedication to the Canadians who fought on both sides. “We are interested in presenting historical fact, and we have no interest in sanitizing our history,” he added, further explaining how society can learn from past historical mistakes and “grow positively for the future.”

Grays and Blues President Robert McLachlan, who is the other co-chair of the monument project, made similar comments. “In a nutshell, we are preserving Canadian history, period—both local and inter-provincial, telling the historical facts relating to thousands of Canadians who enlisted and fought in the Civil War… not commemorating or condoning the Civil War itself,” he said.

Nathan Ince, a PhD Candidate in Canadian History at McGill University in Montreal disagreed. He wrote an opinion piece opposing the monument that appeared in The Toronto Star on August 23.  Ince argued that monuments are not built to inform people about facts, and noted “That’s what books are for.”  He argued that monuments are statements about what society should be commemorating and celebrating, and that the statement the monument is making is therefore “reprehensible.” Ince said that the neutral approach being taken by those erecting the monument “suggests a moral equivalency between those who fought for the South to defend white supremacy, and those who fought for the North to oppose it.” He added that even though the monument’s organizers said that 90% of the Canadians who served fought on the Union side, the monument is still commemorating the 4,000 “who fought for white supremacy” on the Confederate side.

Robert McLachlan did not share Ince’s opinion. “As for the news media, or others, who only wish to ‘sensationalize’ a local historical recognition event, and incorrectly make numerous negative assumptions, and misquotes, I cannot really comment on their lack of objectivity and ignorance of Canadian history,” he said, noting that 29 of the Canadians who fought in the Civil War were awarded the Congressional Medal of Honor, and five Canadians ended up becoming U.S. generals.

The monument to the Canadians who served in the American Civil War will be unveiled at Ault Park near Cornwall on September 16.

2 Comments on “Monument near Cornwall will be dedicated to 1000s of Canadians who served on both sides of U.S. Civil War”