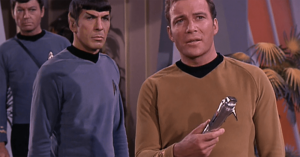 As someone who always has an eye out for wowser tech news, I was quick to pass around an item on the new Google Pixel 2 phone which kind of buried the lede – that its wireless earbuds, (along with the phone) could translate between 40 languages in close to real time. I may have to wait for my personal jetpack, but Star Trek’s universal translator was now at hand.

To be fair, the demo conversation was staged, simple and stilted, but it rated on the wowser scale anyway. Going across the hall, Bill further dimmed my geek joy by referring me to recent experiences with the reliability or even intelligibility of machine translation. Still, Google’s command of Swedish has to be better than my own.

But handy as this new tech may be if you are looking to find a latte in Istanbul, language is only one source of mutual incomprehension. How about applying AI and cloud computing to translating between progressive and conservative, young and old, men and women, Yankee fan and Red Sox fan? Google – or the Federation of Planets – should get right on that.