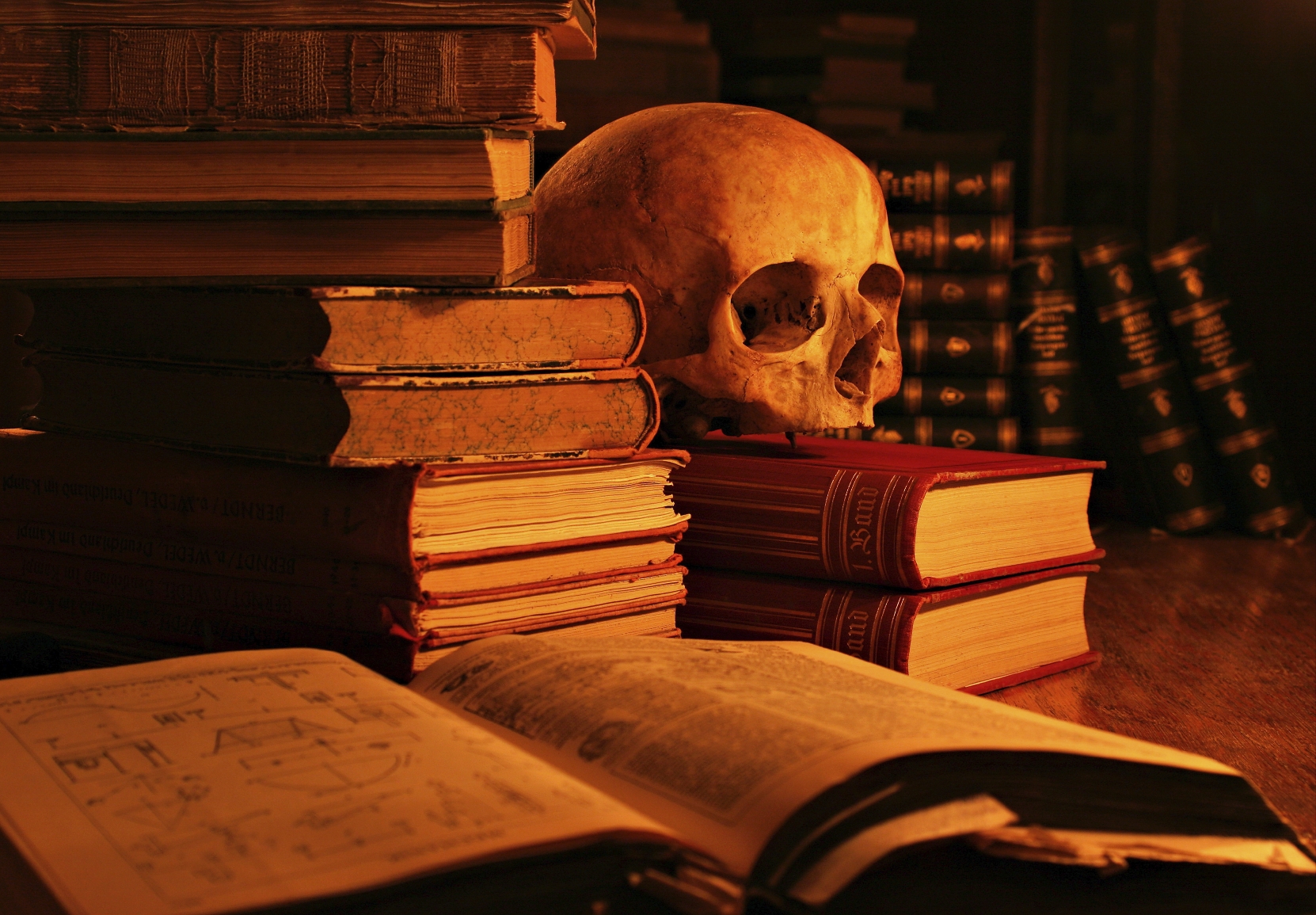 Our latest reading list from regional librarians, compiled by Rebecca Donnelly of the Potsdam Public Library, is just in time for Halloween. Scary reads for all ages. Rebecca writes:

I’ve pulled together our usual local librarian recommendations on a spooky October theme, as well as some top picks from fellow librarian & professional horror reviewer Becky Spratford, who writes for Booklist and Library Journal as well as touring the country to talk to library staff about how to match readers to books they’ll love. We call that reader’s advisory or RA; her blog is called RA for All.

A terrifying story set in a world where an unknown threat has killed off almost every person on earth. We don’t know what the threat is though because everyone who sees it kills themselves. So, the only way to protect yourself is to never open your eyes. EVER. The claustrophobia of this story is oppressive, intense and terrifying from the first page, and it only builds from there. There is also no gore here, but that makes the fear you will feel even more intense.  — Becky Spratford, RA for All

The Caretaker of Lorne Field by Dave Zeltserman (2010)

The Caretaker of Lorne Field has an imaginative frame that should please readers looking for the unsettling feeling of horror without all the gore. Jack Durkin is the current caretaker of Lorne Field, but he is merely one in a 300-year line of Durkin men who have held the job. From spring until first frost, Jack’s life is dedicated to pulling the weeds that grow in Lorne Field. Why? Because the weeds are vicious monsters, and if not weeded, they will grow to their full form, leave the ground, and destroy the world! Then again – they might just be weeds. The only way to know for sure is to stop taking care of the field.  — Becky Spratford, RA for All

Not for the faint of heart, this disturbing novel begins innocently enough. When John Newton receives an anonymous demand to leave chocolate on a particular gravestone, he doesn’t see any harm in carrying out the request. Neither does the reader. However, as the requests escalate and the consequences for not following through become increasingly dire, Newton finds himself torn. By extension, the reader can’t help but contemplate what he or she would do in a similar situation. Like the darkness in the title, this book demands the reader keep turning the pages. A roller coaster of a read from an excellent writer whose work deserves far more exposure than it gets. — Linda Adams, Reading Room Association of Gouverneur

Summary:  Ghost stories are and always have been “weird,” by the very definition of the word, so a few new ones are included in this book.  But there’s so much more that’s truly weird than just ghosts to talk about. There was the stone fetus and oldest person alive; devastating wind sheers, earthquakes, and a year without summer; hangings, murders, and amazing feats of accomplishment. There have been secret societies, blood libel, and mob mentality; tiny dinosaur like beings, and giant river creatures. We have a vortex at Thompson Park, which has caused several people to vanish and reappear elsewhere; a man who went deep into the woods of Essex County, chained himself to trees with padlocks, and threw away the keys; and a record-breaking forty-two-point buck… — Tracy Tanner, Bodman Memorial Library

When Triss wakes up after an accident, she knows something is very wrong. She is insatiably hungry, her sister seems scared of her, and her parents whisper behind closed doors. She looks through her diary to try to remember, but the pages have been ripped out. Soon Triss discovers that what happened to her is more strange and terrible than she could ever have imagined, and that she is quite literally not herself. In a quest to find the truth she must travel into the terrifying underbelly of the city to meet a twisted architect who has dark designs on her family – before it’s too late.

Set in England after World War I, this is a brilliantly creepy but ultimately loving story of the relationship between two sisters who have to band together against a world where nothing is as it seems. (Description from Goodreads)  — Angela Newman, North Country Library System

Okiku is a lonely soul, wandering the world for centuries, freeing the spirits of the murdered-dead. She was once a victim herself, but now takes the lives of killers with the vengeance they’re due. But none of this brings Okiku peace. Such is her existence, until she meets Tark. Evil writhes beneath his skin, trapped by a series of intricate tattoos. While his neighbors fear him, Okiku knows the boy is not a monster. What Tark needs is to be freed from the evil that clings to him. There’s just one problem: if the demon dies, so does its host. — Erin Gingrich, Potsdam Public Library

The House with a Clock in its Walls, John Bellairs (1973)

When Lewis Barnavelt, an orphan. comes to stay with his uncle Jonathan, he expects to meet an ordinary person. But he is wrong. Uncle Jonathan and his next-door neighbor, Mrs. Zimmermann, are both witches! Lewis is thrilled. At first, watchng magic is enough. Then Lewis experiments with magic himself and unknowingly resurrects the former owner of the house: a woman named Serenna Izard. It seems that Serenna and her husband built a timepiece into the walls – a clock that could obliterate humankind. And only the Barnavelts can stop it! –Annie Chase, Potsdam Public Library

Twelve-year-old Amy is having difficulties at home being responsible for her sister, Louann. While visiting her Aunt Clare at the old family home, she discovers an eerily-haunted dollhouse in the attic-an exact replica of the family home. Whenever she sees it, the dolls, representing her relatives, have moved. Her aunt won’t listen to Amy’s claims that the dolls are trying to tell her something. This leads Amy to research old news reports where she discovers a family secret-the murder of her grandparents. The two sisters unravel the mystery. Amy grows to accept her sister and to understand that Louann is more capable than she had first thought. (Description from Goodreads) — Angela Newman, North Country Library System 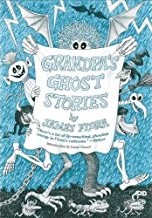 On a dark, stormy night, grandpa tells his young grandson scary stories of when he was a boy. This story within a story is divided into three sections. The first part, “The Bag of Old Bones,” recounts grandpa’s encounter with a disassembled skeleton who persuades him to put him back together again with dire results. The second part, “The Cave of the Warty Witch,” involves grandpa being turned into a spider by a wicked witch with a bad case of warts. The third part, “The House of the Ghastly Ghost,” follows grandpa as he is trapped in a house of a vile ghost who forces him to watch one ghoulish TV show after another. How does grandpa escape this frightening ordeal? You will have to read the book to find out!

Grandpa’s Ghost Stories is memorable for both its highly imaginative story and for its unusual artwork thanks to author/illustrator Flora, who was also an album cover artist for RCA and Columbia Records. One look at these pictures and they will become ingrained into the inner recesses of your mind for all time! — Jessica Godfrey, Annie P. Ainsworth Memorial Library 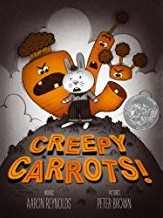 The carrots that grow in Crackenhopper Field are the fattest and crispiest around and Jasper Rabbit cannot resist pulling some to eat each time he passes by, until he begins hearing and seeing creepy carrots wherever he goes.

Jasper Rabbit is NOT a little bunny anymore. He’s not afraid of the dark, and he’s definitely not afraid of something as silly as underwear. But when the lights go out, suddenly his new big rabbit underwear glows in the dark. A ghoulish, greenish glow. If Jasper didn’t know any better he’d say his undies were a little, well, creepy. — Ceil Cunningham, Macsherry Library, Alexandria Bay

“Once upon a time there was a dark dark moor,” begins this atmospheric picture book, in which a black cat takes the reader through the woods to a house, and through the house to a not-so-spooky surprise at the end. A perfect read-aloud for younger children who want to enjoy Halloween without being too scared. — Rebecca Donnelly, Potsdam Public Library

1 Comment on “Book picks for Halloween: Be afraid, be very afraid”