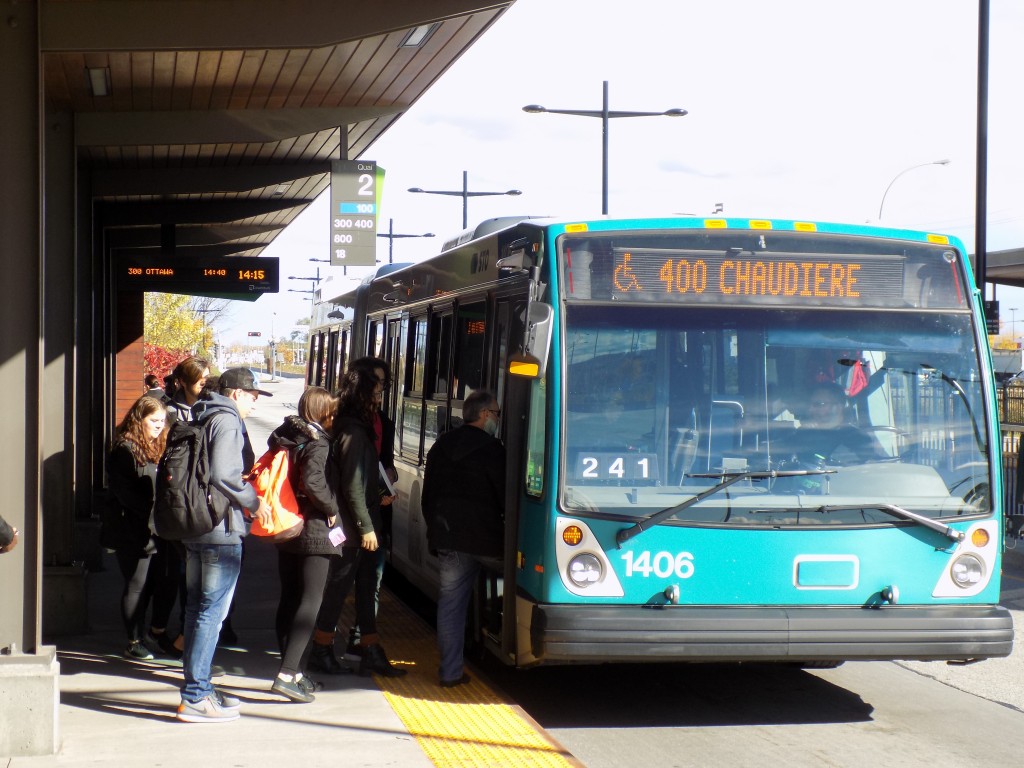 The source of controversy

The Quebec legislature has passed a controversial law, Bill 62, which aims to enforce the religious neutrality of the state and allow for the accommodation of citizen’s religious identities in certain situations. However, it requires any person making use of a provincial or municipal public service to keep their face completely uncovered while obtaining that service. That includes boarding a city transit bus, borrowing books from a public library, being admitted to a public hospital, or renewing a motor vehicle registration. The law will affect Muslim women who wear a niqab or burka that covers all of their face except for their eyes. That fact is the source of the controversy. 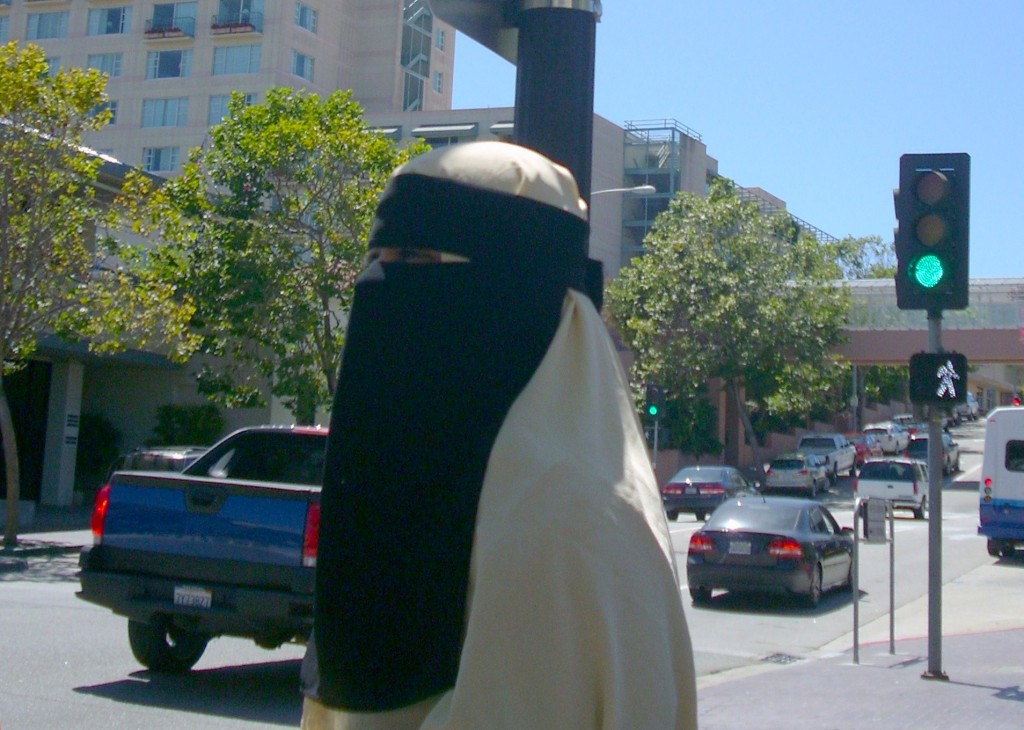 Anas Tiane, the Vice President of the Aylmer Mosque in Gatineau said he has lived in the community for nearly 20 years and has rarely seen a Muslim woman with a covered face. He said the number of women who choose to keep their faces covered is extremely low. He said no person of any faith should be in a position to choose if they can receive a public service or not, and that the new law unfairly targets Muslim women.

Tiane said he does not believe the law is based on actual evidence, and that more studies are needed to see if such a law even makes sense. Five different Canadian Muslim organizations have stated their opposition to Quebec’s new law. Their joint news release stated that the law isolates Muslim women and makes them more vulnerable to hate crimes.

“We are firmly opposed to the bill,” said Noa Mendelsohn-Aviv, Acting Executive Director of the Canadian Civil Liberties Association. The CCLA urged that the government not go ahead with the bill when it was first proposed a year ago. Mendelsohn-Aviv said the CCLA is concerned about a law that will have an impact on a very small number of Muslim women and called the law “deeply inequitable.” She said the law is unconstitutional and will likely be challenged in court, but organizing a challenge takes time. She added that it infringes on individual rights to freedom of religion, expression, and right to equality – all of which are protected under the Canadian Charter of Rights and Freedoms. Mendelsohn-Aviv also said the law is a disappointment to those who believe that Canadians generally live in an equitable society. The Canadian Muslim Lawyers Association and the National Council of Canadian Muslims are among the organizations considering legal options to take against the law.

The federal government has been reluctant to intervene. Prime Minister Justin Trudeau has even said that the government does not plan to provide any funding to potential court challenges. The constitution also allows the federal cabinet to disallow any law passed by a provincial legislature. It’s been decades since that has happened, and the Trudeau Liberals are unlikely to use the option because it would damage the fairly strong support they have in Quebec and cause increased support for nationalism and separatism in the province. The Canadian Human Rights Commission, the non-political federal agency responsible for constitutionally-protected civil liberties has warned that Quebec’s law could have consequences at the federal level though. Bus routes operated by Gatineau’s city transit authority cross the Ontario border, and Ottawa city bus routes serve Gatineau, too. The Amalgamated Transit Union, which represents Gatineau bus drivers, has stated it does not expect its members to enforce the law whenever someone boards a bus, and that it will file grievances against the transit authority if drivers are instructed to enforce it, or are disciplined for not enforcing it. 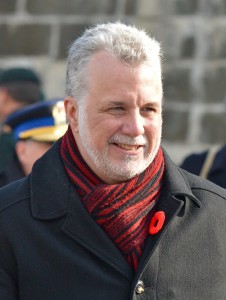 Premier Philippe Couillard has continued to defend his Liberal government’s action. “I should see your face, and you should see mine,” he recently said to reporters. Justice Minister Stéphanie Vallée (Liberal-Gatineau) held a press conference to try and clear up misconceptions and controversies. Using city transit buses as an example, she said citizens only have to uncover their faces while boarding and paying their fares, not while seated. All Liberal members of the legislature voted in favor of the bill. The opposition parties voted against it, because they thought it did not go far enough to enforce secularism.

The public prominence of religion—or certain religions, has been an issue in Quebec for decades. To many people, Quebec’s identity is based exclusively on white, Francophone heritage of Christian origin, even though most Francophone Quebecers today are not religious. To others, it should be based on no religious influence at all.

From the 1937 to 1957, the province’s so-called Padlock Law allowed for police to seize and padlock the premises of communist organizations. The government also used it to curtail the activities of Jewish groups and Jehovah’s Witnesses. The Padlock Law was eventually struck down by the Supreme Court of Canada. 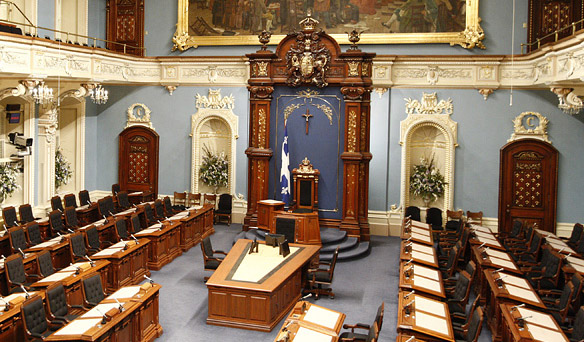 A crucifix has been attached to the wall above the speaker’s chair in the Quebec legislature since 1936. Photo: Assembleetest, Creative Commons, some rights reserved

In 2007, the council in the small village of Herouxville adopted a “Code of conduct” for immigrants in the community which was strongly anti-Islamic. None of Herouxville’s 1,300 residents were Muslim. More recently, residents of the town of St. Apollinaire voted against allowing a Muslim cemetery to be built there.

A crucifix has been attached to the wall above the speaker’s chair in the Quebec legislature since 1936. Quebec Solidaire, the most left-leaning party in the legislature, recently introduced a motion to remove it, but it was defeated by the Liberals. While Quebec and Canada continue to welcome people of all faiths, how to accommodate the different beliefs of everyone there remains a huge source of controversy.