The business section of Morrisburg, Ontario in the 1950s before flooding from the seaway. This photo was taken looking east on Highway 2. The intersection with Highway 31, at the left, was evidently busy enough in the 1950s to warrant traffic lights. The village war memorial is located behind the Texaco sign for the station owned by Arthur Edgerton, who was also a member of the village council when the seaway opened.  Photo: The Rev. George H. Smith, Copyright held by Claire Delage. Photo used by permission from John Gleed.

An interest in the past

Morrisburg Ontario is being rebuilt, in miniature. The village on the Canadian side of the St. Lawrence River (opposite Waddington, NY) was partially relocated in the 1950s when the St. Lawrence Seaway was built, but resident John Gleed has launched a project to construct a scale model of the village as it looked before the relocation and flooding. 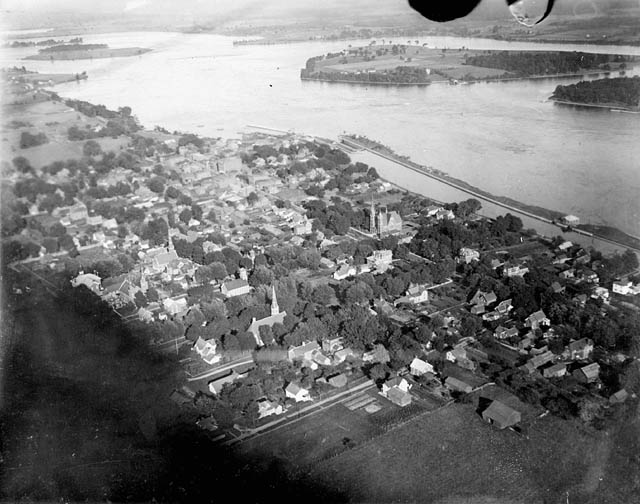 An aerial view of pre-seaway Morrisburg. The original waterfront and business section is shown. Library and Archives Canada; MIKAN# 3261497

“It’s a beautiful little spot,” said Gleed about the village he retired to in 2008 after a career in Ottawa’s high-tech hub. He said he was fascinated by the Seaway project and “how it completely changed the region.”

Indeed, almost all of Morrisburg south of what is today’s Lakeshore Drive is now underwater. That area includes what was the town’s original business section, many homes, the former Lock 23 on the old canal system, and the Canadian dock for the former Morrisburg-Waddington ferry. Most of residential Morrisburg was spared, but some houses were moved, or new ones built on new streets. The business area was relocated to the shopping plaza along the new alignment of Highway 2.

John Gleed has combined his interest in how his town looked 60 years ago with his photography hobby, which includes flying a drone along the St. Lawrence River to get shots of the scenery and passing ships. He obtained old maps of Morrisburg from before the Seaway, maps showing plans of the relocated areas, and began overlaying them with present-day Google images. That’s how he got the idea to re-create how Morrisburg originally looked. 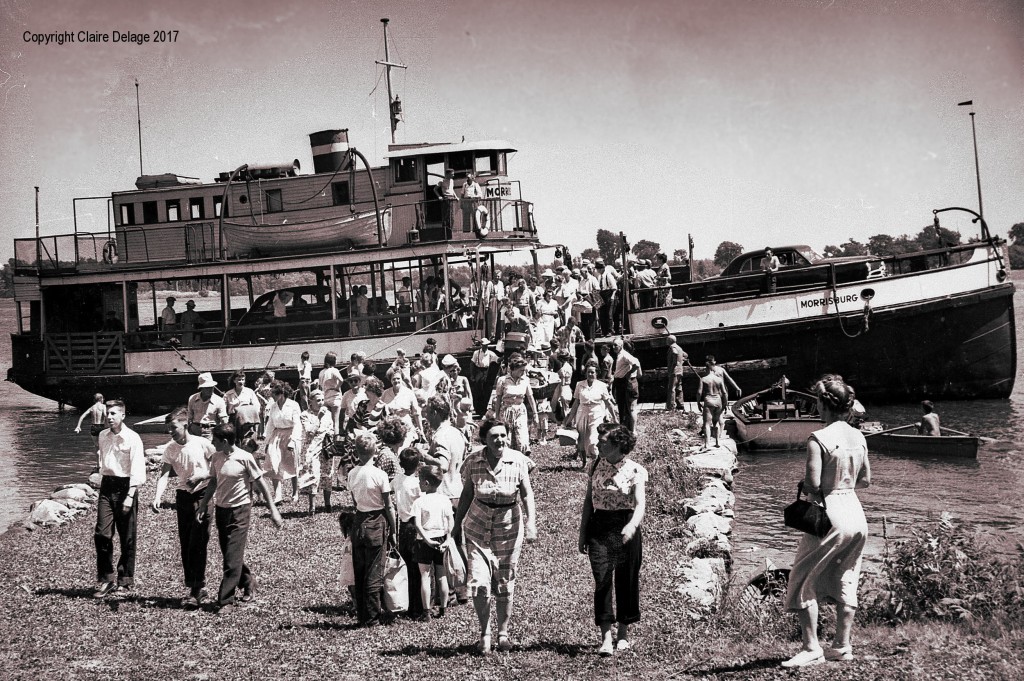 The Morrisburg-Waddington ferry used to take passengers over to Broder Island for the village’s annual community picnic. This is from what was probably one of the final excursions in the 1950s. Photo: The Rev. George H. Smith, Copyright held by Claire Delage. Photo used by permission from John Gleed.

Right now, the project is in the planning and fundraising stages. Gleed has assembled a 12-member, volunteer project team of other Morrisburg residents who have interest and knowledge about their community before and after the seaway. The town is part of the South Dundas municipality and the council recently endorsed the model village project. Gleed wants to raise $200,000 (Canadian) in total–$100,000 for the actual model village itself, and another $100,000 for future maintenance. Donations are being accepted through the South Dundas Waterfront Committee and are eligible for income tax receipts. Corporate sponsorship from the surrounding region is being sought, along with cooperation from organizations like the chamber of commerce. SCUBA diving is a popular activity along the St. Lawrence River in areas flooded by seaway construction, and Gleed is also hoping for help from people involved in that activity because of their interest in places that are now underwater. 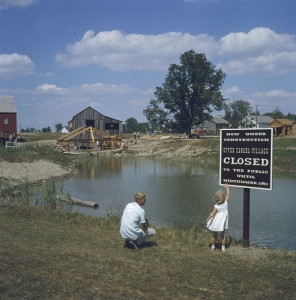 Upper Canada Village before it opened in 1961. The site included many buildings relocated from areas now submerged. Library and Archives Canada; MIKAN# 4314268

Miniature Morrisburg will be built using HO model railroad scale. Unlike those plastic kits for miniature railroad stations and town buildings that are sold in hobby shops, everything for Morrisburg will have to be one of a kind. In order to make the models as accurate as possible, the plan is to distribute detailed photographs and dimensions of buildings to volunteers who will then build them. Fortunately, private collectors and the St. Lawrence Parks Commission have extensive collections of photographs of pre-inundation buildings and communities. Gleed is hoping to work with local schools to get students involved, especially those in shop and art classes to help with building and decorating. The idea behind that plan is to teach students art and construction skills, but to also teach them the history of their community.

Organizers of the model village project are hoping the finished product becomes a visitor attraction for Morrisburg. Gleed said it is surprising that many visitors who attend plays at the Upper Canada Playhouse theater, or visit the nearby Upper Canada Village historic site are not aware of the history of the St. Lawrence Seaway and the impact it had on the region. Gleed hopes that the Morrisburg Model Village can become a part of the other local historical attractions that highlight seaway construction and the major changes it made to area communities. Those other attractions include Upper Canada Village, where many of the buildings are structures that were relocated from flooded communities, the Lost Villages Museum in Long Sault which highlights the history of all nine “Lost Villages” that are now submerged, and the Ontario Power Generation visitor center at the Moses-Saunders power dam in Cornwall which explains the entire history of the Seaway project. 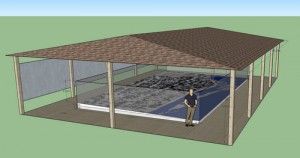 The proposed design of the Morrisburg Model Village. Image used by permission from John Gleed.

The Morrisburg Model Village will be located at the eastern end of the park area along Morrisburg’s present-day waterfront. The first phase of the project is to create a concrete pad showing the original streets, lots, waterfront, and railroad tracks. The buildings will eventually be placed on the pad under protective glass and attention will be given to the contours of the land, too. A pavilion-style shelter will cover the concrete pad and model village.

There will also be information display panels on the pre-Seaway community and the buildings, along with a list of donors to the project. John Gleed hopes to have the concrete pad portion of the model village project ready for unveiling on July 1, 2018. That day will be the 60th anniversary of Inundation Day. On that date in 1958, the cofferdam on the seaway construction site was blown up and water began to gather—and flood the areas behind the new dams and canals, submerging part of Morrisburg, and all of nine other Ontario villages. More information on the Morrisburg Model Village and how to volunteer or support the project can be found at  http://morrisburgmodelvillage.ca.

1 Comment on “Mini Morrisburg: plans for an HO scale model of the village as it was before the Seaway”