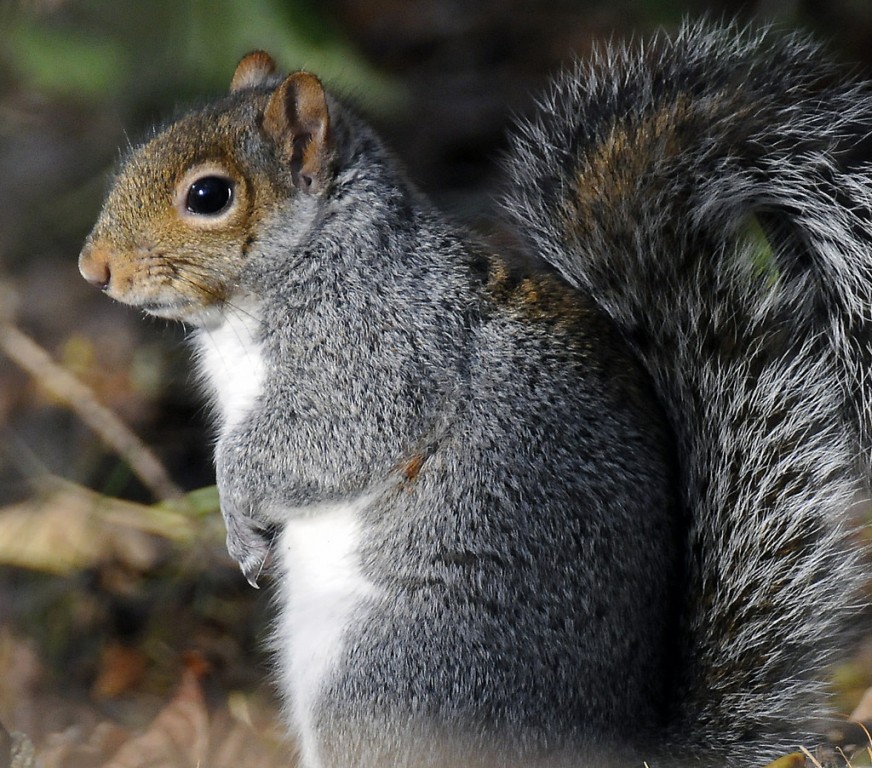 Now where’s my nuts? The gray squirrel is not the sharpest knife in the drawer. Photo: Ray Morris, Creative Commons, some rights reserved

“Squirrels have been criticized for hiding nuts in various places for future use and then forgetting the places. Well, squirrels do not bother with minor details like that. They have other things on their mind, such as hiding more nuts where they can’t find them.”

Unfortunately, that succulent passage was penned in 1949 by W. Cuppy in his book “How To Attract A Wombat.” I say unfortunately because I wanted to write it first, but was unable to get born in time. The tradeoff, which is that I got to be quite a bit younger than he, probably worked out for the best anyway.

Before learning stuff like “facts” about squirrels, it made me feel smug to think that their attention span was even worse than mine. Popular wisdom used to hold that the fluffy-tailed rodents spent half their lives burying nuts, only to forget about most of them a few minutes later. I figured that was why they generally seemed frantic, always thinking they hadn’t stored any food yet. 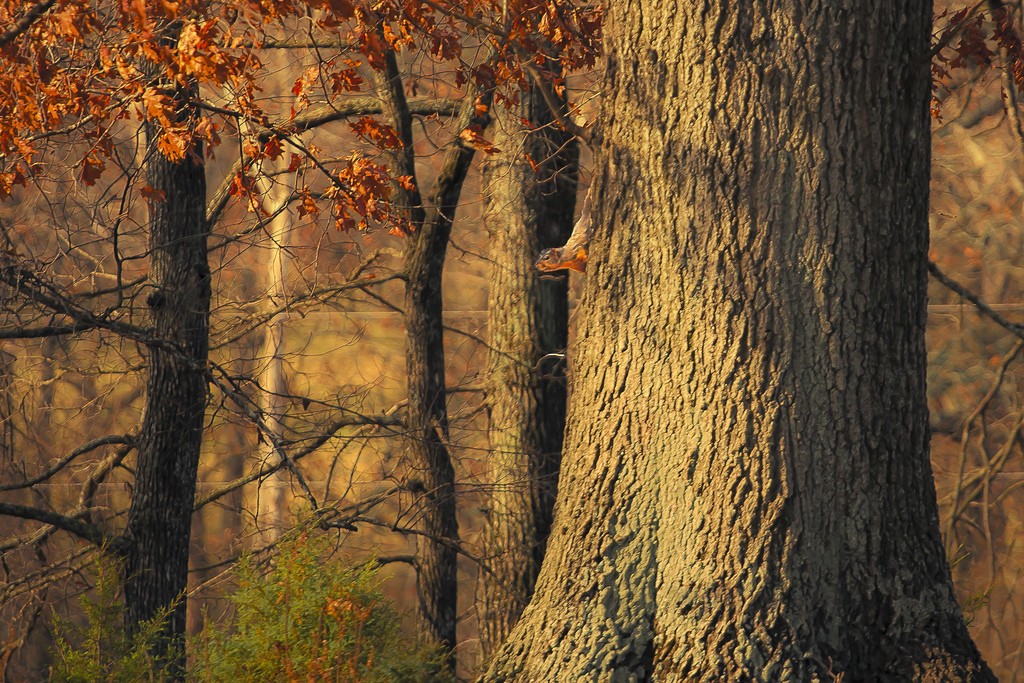 Gray squirrels are native to temperate hardwood forests, at home in large unbroken tracts of woods, and are critical to the survival of many nut-bearing trees. Photo:
Carol Von Canon, Creative Commons, some rights reserved

The great thing about the whole affair is that tons of butternuts, oaks, hickories and walnuts get planted each fall, mostly in flower boxes, but some in actual forests where they can grow to maturity. As a kid I would see untold numbers of squirrels in parks, on college campuses and around dumpsters, but few in the woods. The latter, I assumed, were lost, or in transit to a day-old bakery outlet.

So it came as a surprise to learn gray squirrels are native to temperate hardwood forests, at home in large unbroken tracts of woods. In fact, squirrels are critical to the survival of many nut-bearing trees. Walnuts, acorns and hickory nuts, which do not tend to waft on the breeze so well, and which soon dry out and degrade on the ground, need someone to cart them off and plant them in the ground.

The irony is that while gray squirrels can be so numerous in the human domain that they become pests, they are disappearing from the forests that depend on them for regeneration. The reason is that most woodlands today are patchwork. In a shocking failure of the free market, it seems no one is making large contiguous tracts of forested land any more, even though they’re increasingly rare.

It’s hard to criticize agriculture, especially if you eat on a regular basis, but clearing land to grow food has fragmented our woods. One problem with breaking up forest land is that animals may need more than just a piece of it at a time. 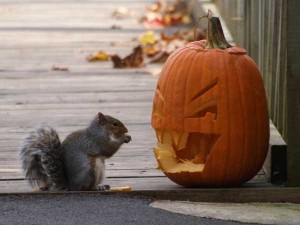 “They are great at things like tree planting and eating the faces off Halloween pumpkins.” Archive NCPR Photo of the Day: Rose Turner, Calcium, NY

Gray squirrels have large, shared territories with no real borders. Although they are great at things like tree planting and eating the faces off Halloween pumpkins, they’re not so good at running across fields to the next patch of trees. Well the running works OK, but not the looking out for predators. Gray squirrels evolved in a world where hiding places grew on trees. As a result, predation was low. But since the time they have been forced to hike out in the open, hawks, coyotes and foxes have taken a bite out of wild squirrel populations.

Red squirrels, however, are moving into habitats once occupied by gray squirrels. It seems logical to think that an army of red, fluffy nut-planters would be just as good as propagating an oak-hickory forest as the gray, fluffy sort were. Not so. 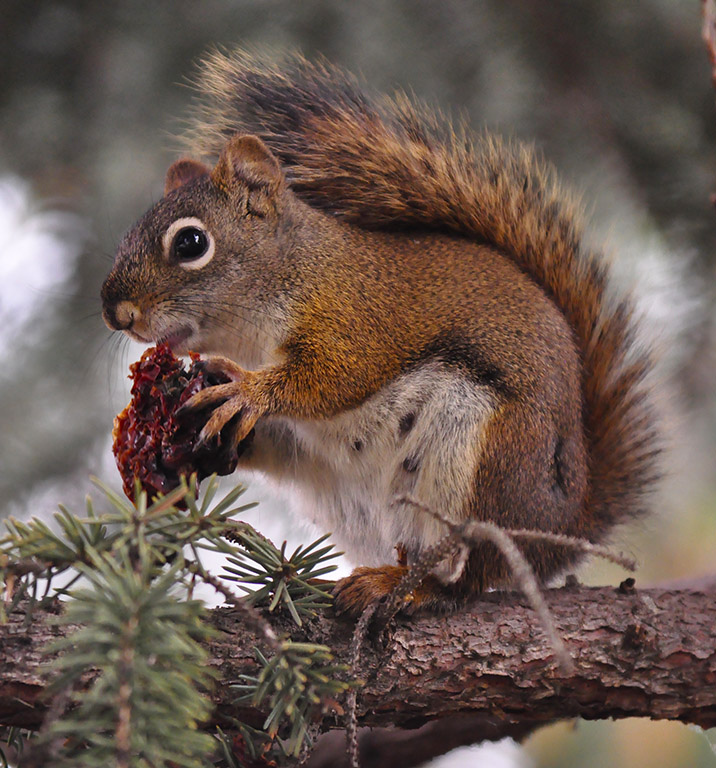 The red sqirrel is no substitute. They prefer conifers and don’t store nuts in a way that helps trees propagate. Photo: Connormah, Creative Commons, some rights reserved

The reds, which evolved among conifers, are accustomed to stashing pine, spruce and fir cones in hollow trees or right out in the open. When they encountered acorns and nuts, they carried on with this tradition. In the open-air caches of the red squirrels, tree nuts desiccate and become non-viable. Nothing gets planted. Also, red squirrels have smaller, discrete territories they do not share, so they’re not as apt as the grays to gallivant over to a nearby block of trees, and thus they avoid those pesky carnivores. In this way they’re better adapted to a fragmented forest than the grays are.

Getting back to forgetfulness, science has polished up the reputation of gray squirrels by observing them. Evidently no one thought of doing this novel procedure until 1990. That’s when Lucia F. Jacobs and Emily R. Lyman of Princeton University’s Biology department set up a series of nut-caching experiments with gray squirrels. And hopefully a few interns as well. Their impressive article was published in the Journal of Animal Behavior in 1991, and is readily available online in case anyone has an attention span longer than.

I should mention that gray squirrels are considered “scatter hoarders,” stashing nuts and acorns all over the place. They tend to dig them up and rebury them as many as five times prior to winter, possibly to confound greedy neighbors or pilfering jays. Each successive re-cache takes them farther and farther from the parent tree, which is good in terms of forest ecology.

Jacob and Lyons concluded that even after waiting 12 days, gray squirrels quickly located about 2/3 of the nuts they buried, but that they also exhumed a few that weren’t theirs. However, each squirrel managed to end with at least 90% of the original number provided by researchers. This shows that memory is the primary means of locating cached tree nuts. And that while they don’t plant as many trees as we once thought, they make up for it by planting each one many times.