One sign that the more things change, the more they remain the same, is this quote from the Classical Greek statesman Solon: “I grow old learning something new every day.” It makes me suspect that ancient Athens was just as full of scandal, fury, craziness, fear and loathing as the present day. As Gilda Radner put it so succinctly, “It’s always something.” 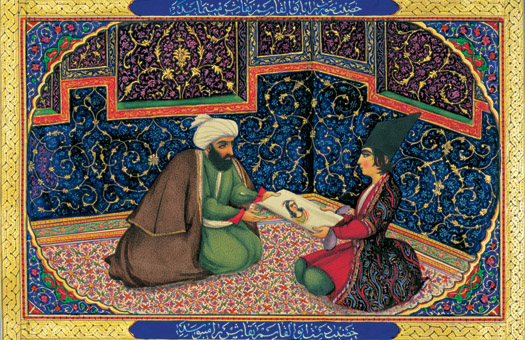 Scheherazade and the Sultan – a new tale every day or off with your head. Illustration from “One Thousand and One Nights,” Sani ol-Molk

They call it the daily news because it has to be new, and it has to be every day. (Some days I grow old faster than others.) It’s as if the audience is Sultan Shahryar and we in public media are Scheherazade – a new tale every day or off with your head.

Since I’m as addicted to novelty as the next guy, when I tire of the daily outrage that is “hard news,” I seek solace in science and the arts, those other wellsprings of daily innovation. So here are three new things I learned this week from EarthSky:

Asperitas clouds over Tenerife. “A year ago, this cloud wouldn’t have had an official name, despite many photos sent for years to the Cloud Appreciation Society. Thanks to the society’s founder, Gavin Pretor-Pinney, the World Meteorological Organization finally officially recognized this cloud in the 2017 version of their International Cloud Atlas.”

It’s an awesome-looking cloud, but the new thing? – There really is a Cloud Appreciation Society? And an annual International Cloud Atlas?

The largest land organism is … a fungus: “The largest terrestrial organism on the planet is a fungus called Armillaria solidipes – or honey fungus. The largest honey fungus identified in North America is in Oregon. It measures 3.4 miles (5.5 kilometers) across! That’s considerably bigger than the biggest giant sequoia or African elephant. Scientists also believe that this particular honey fungus may be over 2,000 years old.”

That a big freakin’ mushroom, but the new thing? – It’s a parasite killing off Northwestern firs; there really is a war on Christmas (trees).

Giant black hole at cosmic dawn: “Meet J1342+0928, now the most distant quasar yet known, containing the most-distant-yet supermassive black hole. Both exist at a time just 690 million years after the Big Bang…. The Banados quasar is also interesting, because it is from the time known as the epoch of reionization, when the universe emerged from its dark ages.”

13 billion years old is extremely superannuated, but the new thing? – The Big Bang was followed by hundreds of millions of years of total darkness. Makes me feel a little better about the problems of today.

And if you prefer finding your novelty in the arts, you can check out photographer Burdette Parks new show at the Adirondack Artists Guild. Read about why he is taking a big detour from realism and see a dozen new works from “What’s New is Old Again“