20 years ago, eastern Ontario, southern Quebec, and part of the North Country were recovering from the Ice Storm of 1998. I didn’t live in the areas affected at the time, but I want to share stories from those who did, or who were sent there to help with relief efforts. 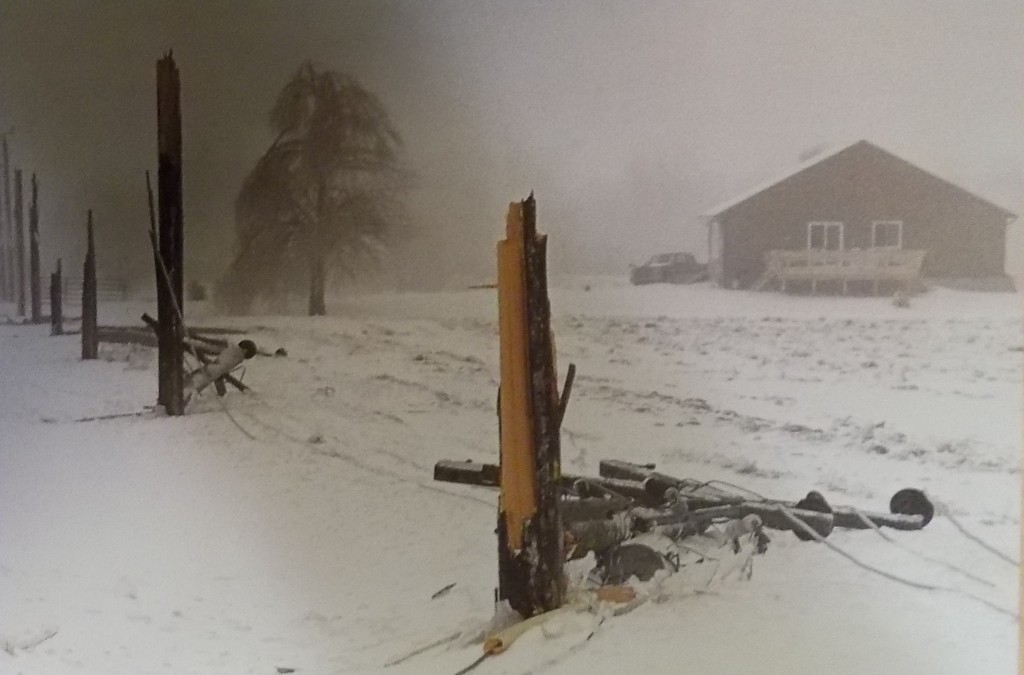 A power line, completely destroyed by ice, near Greely, Ontario, south of Ottawa. Photo from “To The Rescue: A Commemorative Magazine Dedicated to All Those Who Battled the Darkness and Won.” Ontario Hydro, 1998.

My Dad, Grant Morgan, was one of the 800 employees of Ontario Hydro and other power utilities who were dispatched to eastern Ontario to rebuild power lines and return service to customers. Whenever he did sleep, it was at a motel in Morrisburg that didn’t have electricity most of the time. Others slept on cots in community centers or tents. Dad sounded exhausted and overwhelmed whenever he called home. He worked from the Ontario Hydro facility in Winchester, but supervised crews all over the region. Aultsville Road, Ingleside, Long Sault, Limoges, Casselman, Finch, and Longueil Transformer Station are just some of the places his crews were in. The utility workers also had support from 500 army personnel who assisted. Combat engineers removed tree branches off roofs and used excavators to assist utility crews. Ontario Hydro’s customer call center received 243,000 telephone calls. Equipment and supplies were requisitioned from all over North America. The community appreciation was amazing. Dad remembers a town council member organizing a roast beef dinner for utility workers. Residents of homes would run outside to thank line workers who had just reconnected their power.  Many homes and businesses were without it for two weeks. 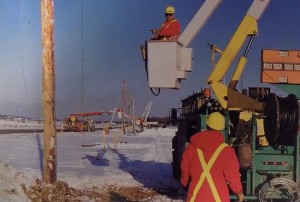 Ontario utility crews rebuilding a line destroyed by the ice storm. Photo from “To The Rescue: A Commemorative Magazine Dedicated to All Those Who Battled the Darkness and Won.” Ontario Hydro, 1998.

In Kingston, Tony Orr was managing the news department for radio stations owned by the CHUM chain when the storm first hit there on January 7. 1380 CKLC-AM, was the only station still on the air—the transmitters for every other station had been knocked out by the ice. On Wolfe Island, every utility pole was broken, but the CKLC transmitter tower was still standing, and the mostly underground / underwater telephone line connecting it with the studio in Kingston was still in service. The transmitter generator had also been recently refueled as well. Orr went to work at 2 am the next morning. The power was out at his house. He stopped to pick up colleague Rick Choma who didn’t want to go because there was a tree and power line down across his front sidewalk. Orr convinced Choma to jump over the tree and line and they went downtown to their dark, third-floor studio where two telephones worked, and backup power kept two computers running. The power was restored at the station just before 6:00 am and they were able to deliver a newscast at the top of the hour. 70% of Kingston had no electricity and Mayor Gary Bennett declared a state of emergency.

“I worked with an exceptional staff that worked extended shifts with no breaks for two weeks,” said Orr, whose own home had no electricity for five days. He moved his wife, daughter, and dog to a Best Western hotel that still had power. Orr said he would sleep for two or three hours before going back to the station.  The station manager gave him full control of programming for as long as was needed. CKLC shifted from extended coverage to occasional special reports so listeners could conserve the batteries in their portable radios. Station staff answered hundreds of telephone calls from residents who wanted to know where they could get fuel, or offer their help as volunteers. Rather than rely on the city’s command center, Orr and his staff decided to gather the information they thought listeners specifically needed to survive the crisis. Jim Keech, the President of the city-owned electrical utility went on air and updated listeners about efforts to restore power, and a spokesperson from Ontario Hydro gave updates on restoration efforts in areas outside the city. Power was fully restored to Kingston 10 days after the storm hit, but CKLC kept doing extended newscasts for another 11 days to keep rural residents who still did not have electricity, informed. 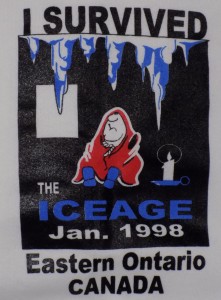 The ice storm was a big disaster and emergency, but people were strong and had a sense of humor. This illustration is on a souvenir sweater from the storm the author’s Dad brought home for him. Photo: James Morgan

Aylmer, Quebec, is across the river from Ottawa. Power outages there were sporadic due to the ice storm, but the situation was still serious. My friend Jean-Nicholas Martineau said his family was fortunate, their house was one of three on their street to be without power for only eight hours. Most of their neighbor’s homes were without electricity for a week. They helped them out by storing frozen food in their freezer. Homes that had gas furnaces still required electricity to make the fan motors on them operate. Martineau said they ran several extension cords from their house to the house across the street, so the occupants could use their furnace. They carefully covered the cords to protect them from being cut apart by the snowplow. One of his friends stayed at their house for a while, and his Mom made a lot of hot soup for neighbors who couldn’t use their electric ranges. Hydro Québec had warned customers who had electricity to not all use their kitchen stoves at once because it could have crashed the fragile system.

Well-known hardware and automotive chain Canadian Tire had no power at its Aylmer store, but it opened so people could buy supplies. They formed an orderly line outside the store and employees escorted customers around with flashlights, so they could safely find merchandise. People also intently listened to the radio for updates from André Caillé, the President of Hydro Québec, about the situation across the entire province, especially in the worst hit “triangle of darkness” zone southeast of Montreal.

Freezing rain is common in this region of Canada and the U.S. every winter, but almost never to the extent of the storm that hit 20 years ago. Whenever it’s in the forecast, everyone still thinks back to the Ice Storm of 1998 and hopes it doesn’t happen again.