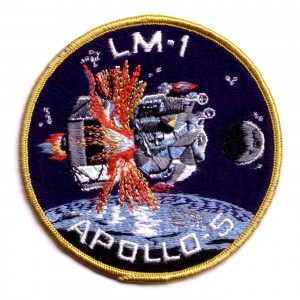 In January 1968, the Apollo 5 mission was launched to test the Lunar Excursion Module in advance of the moon landing. Photo: Grumman Aerospace, public domain

Since most people don’t make it to 100, people are inclined to make a big deal of half-century milestones. 2018 marks one for NCPR. We first signed on the air March 7, 1968 and we will be celebrating our Golden Anniversary all year with a lot of special events (schedule to be announced).

It was a heck of a year, 1968, what you might call “a happening time,” and not always in a good way. Here are some of the things that happened just in the first month of the year. We’ll start off easy:

50 years ago today, January 12, 1968, Johnny Cash performed a concert for an audience of inmates at California’s Folsom Prison. The resulting album  would resurrect his career and lead him to become a passionate advocate for prison reform. January also marked the release of Otis Redding’s posthumous hit, “(Sittin’ on) The Dock of the Bay.”

January 1968 saw the debut of “Rowan and Martin’s Laugh-In” and “The Undersea World of Jacques Cousteau,” and the final episode of “The Man from U.N.C.L.E.”

On January 3, Democratic Sen. Eugene McCarthy put his name on the ballot for the New Hampshire primary. His success in that contest launched a challenge that would lead President Lyndon Johnson to eventually drop out of the race for re-election. Alexander Dubcek was chosen to lead the Communist Party of Czechoslovakia, leading to the liberalization reforms known as the “Prague Spring,” later suppressed by Soviet intervention.

And the assistant postmaster general of the U.S. ruled that “hippies” could continue to work for the service, but only if they lost the beards and sandals and sported neat haircuts.

In science and technology:

In the run-up to the 1969 landing on the moon, Apollo 5 was launched to test the Lunar Excursion Module, and Surveyor 7, an unmanned lander, scouted the surface of the moon.

In war and conflict:

The war in Vietnam reached a peak of violence in January 1968. The 77-day siege known as the Battle of Khe Sanh began in the central highlands of Vietnam. And the month ended with the launch of the bloody Tet Offensive, a series of coordinated attacks by Viet Cong and NVA troops throughout the country. 245 U.S. soldiers would die in combat on January 31, the most of any day in the Vietnam War.

The USS Pueblo, on an intelligence mission, was captured by North Korean gunboats. Its crew would later be released, but the Pueblo remains in Pyongyang to this day. A B-52 Stratofortess crashed near Thule Air Base in Greenland. Explosive triggers in the four nuclear warheads aboard detonated on impact, contaminating three square miles of ice with radioactive plutonium. And “Operation Faultless” was conducted in Nevada, a test to see whether a nuclear device could trigger an earthquake. It could. The one-megaton device, the largest ever exploded in the U.S., created a 6.0 Richter temblor that was felt in Salt Lake City and San Francisco.

4 Comments on “In January, half a century ago”