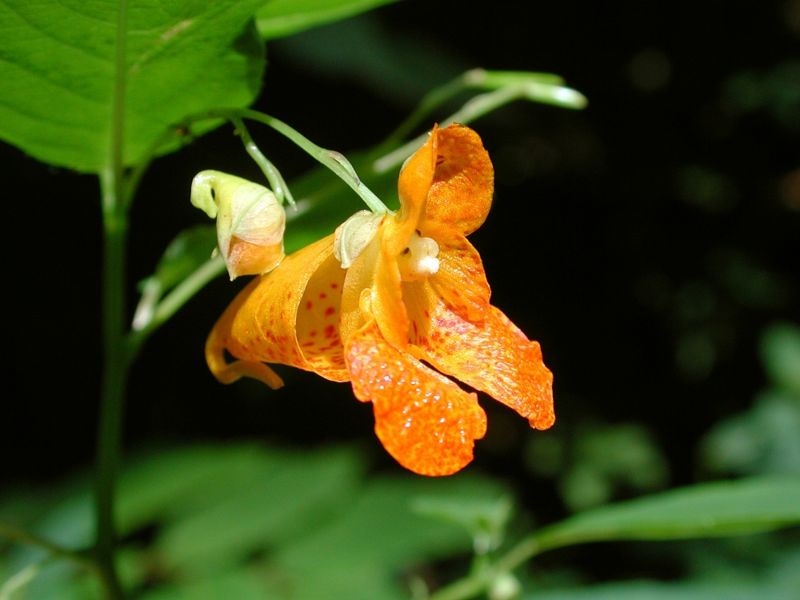 Encouraging people to make friends with wild plants can be a challenge. Sometimes there are genuine concerns. Nettles, as an example, make an early-spring cooked green par excellence, even though its fresh leaves and stems have stinging hairs that can cause an uncomfortable, if temporary, rash if care is not taken when harvesting it.

Other times, it is a matter of perception. Critical to the survival of monarch butterflies, milkweed is delicious when prepared correctly. Jewelweed, native to wetlands, contains a sap which counteracts poison ivy, and its orange or yellow orchid-like flowers attract hummingbirds and butterflies. Yet both plants suffer from having names which define them as undesirable. 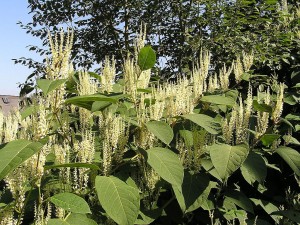 Japanese knotweed is an aggressive invasive, but when young makes a passable rhubarb substitute and it may even yield a treatments for cancer and Lyme disease. Respect. Photo: MdE, Creative Commons, some rights reserved

Even plants more worthy of the title “weed” often have redeeming qualities. The bane of many landscapers, invasive Japanese knotweed should never be intentionally planted or moved. However, it makes a passable rhubarb substitute when young, and its roots show real promise as a treatment for some cancers, and possibly for Lyme disease as well. Although redroot pigweed can be a nuisance weed in vegetable gardens and pastures, its leaves and seeds are nutritious and tasty.

But there are a few names which are intensely hard to swallow. Gagroot, for instance, also called vomitwort or pukeweed, is a tough sell. Its botanical name is Lobelia inflata, and some know it as blue lobelia or Indian tobacco. This native wildflower is a close relative of the shockingly red cardinal flower, Lobelia cardinalis, which bursts into bloom along stream and pond banks in late summer.

Blue lobelia is not as showy as its crimson cousin, but it is an attractive plant in its own right. Though it can reach a height of nearly one meter, it is typically between 20 and 40 cm tall. Its pale blue-violet blossoms give way to inflated seed capsules which remain on the stem. Flowers begin appearing in mid-summer, and continue to bloom until the first freeze. A self-seeding annual, sometimes acting as a biennial, it is easy to grow from seed. Don’t call it gagroot, vomitwort or pukeweed, please. Blue lobelia has been used as its nicknames suggest, but can also promote sweating, act as an antispasmodic, as an aid in smoking cessation, and to relieve symptoms of asthma. It can be toxic in higher doses, so consult your health care provider or an experienced herbalist. Photo: H. Zell, Creative Commons, some rights reserved

At the time of European contact, blue lobelia was in widespread medicinal use by native peoples over the extent of its range, which is basically eastern North America except for northern Ontario and Quebec, and the far southern parts of the US. As its less-flattering nicknames suggest, this plant does induce vomiting. It was championed as the preferred cure for nearly all ailments by American herbalist Samuel Thompson (1769-1843), who managed to remain popular a long while before people finally got sick of his treatments. Over the centuries, Lobelia inflata has also been used to promote sweating, as an antispasmodic, as an aid in smoking cessation, and many other things. It is perhaps best known for its ability to help relieve the symptoms of asthma.

This is the part of the program where I am required to say “It is essential to consult your health-care provider before using lobelia, and to only use it under the supervision of an experienced herbalist.” Except this time I mean it. This is not to say no one should use Lobelia inflata. It is a potent and effective medicine, but like many important drugs such as insulin and digitalis, it is toxic in moderate to large amounts. Misjudging the dosage could lead to convulsions, coma or death.

One of Indian tobacco’s key constituents, lobeline, apparently accounts for the herb’s ability to relax bronchial tubes, open airways, and stimulate breathing. It has been traditionally smoked in small amounts, although today it is also available as a tincture or in capsule form. Occasionally it is combined with other herbs and used as a chest or sinus rub.

Structurally, lobeline does not resemble nicotine, though it does affect the body in similar ways, which might account for its history in helping people kick the tobacco habit. Lobeline may in fact turn out to be a treatment for stimulant abuse. Articles in the medical journals Biochemical Pharmacology (Jan. 2002) and Neurochemical Research (Nov. 2006) indicate that lobeline alters the way stimulants act on the brain’s “reward center.” In the words of the authors, lobeline disrupts “…the fundamental mechanisms of dopamine storage and release.”

In the current season of extra-dry indoor air, frigid outdoor air, wood smoke, and irritating coughs, this remedy could be particularly helpful. Even though it does come from a common native herb, a strong medicine demands strong respect, so check with a medical professional before investigating pukeweed treatment. That is, if you can get past the name.