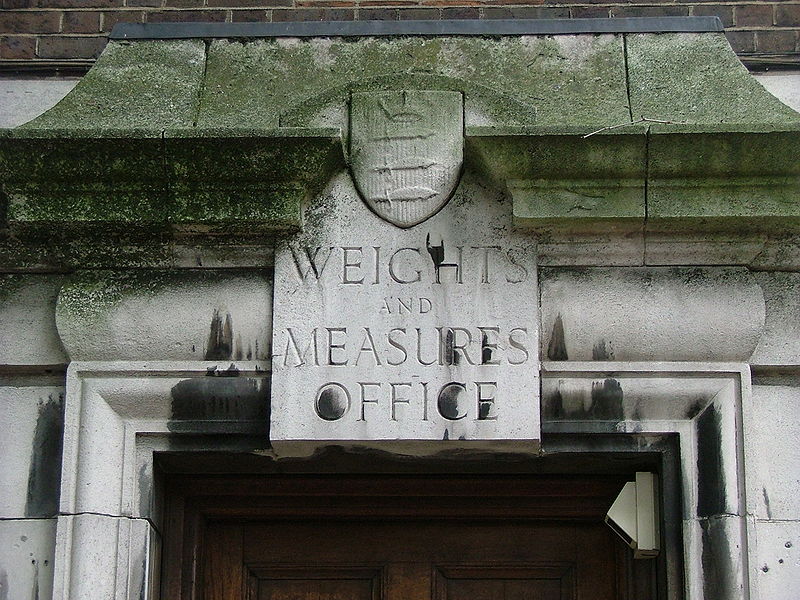 The good news is that Imperial Forces are losing the battle for planetary dominance. The bad news is that we still play for their team. The British Imperial System of measurement, born in 1824 to help streamline a host of odd units inherited from various cultures, was at the time an improvement. In 1965, the UK adopted the decimal-based metric system, despite the fact it was invented by the French. Today, metric is universal in science and medicine, and of the 195 nations on the planet, only 2 have yet to abandon the former British system for general commerce.

Being obsessed with the levy and collection of taxes, the British monarchy was never a slouch at taking stock of things. Mostly other people’s. Tenth-century Saxon King Edgar the Peaceable supposedly had a royal bushel made for the kingdom. Who knows how it was established, but I guess being a ruler entitles you to measure anything. Even the Magna Carta mandated a “…standard width of russet and haberject, namely two ells within the selvedges.” (Please don’t ask me what that means.) In the Middle Ages, a rod, equal to 5.5 yards, was calibrated to “the length of the left feet of 16 men lined up heel to toe as they emerged from church.” I assume feet fresh from church ensured an honest measure. 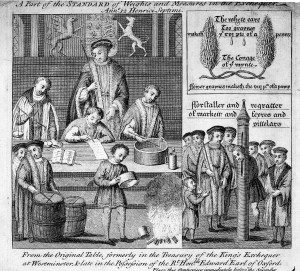 Even older school. A part of the standard of weights and measures in the Exchequer, during the reign of King Henry VII. Image: Wellcome Images, Creative Commons, some rights reserved

Along the way, someone must have noticed that feet came in different sizes, and that having four different-size gallons which varied by what they were intended to hold, was confusing. So, enter the British Imperial System. It designated a single gallon measure, but spared the 12-ounce or Troy pound to remain beside the 16-ounce (avoirdupoid) pound we use in the U.S. for everything not gold or silver.

Although the U.S. Customary system of weights and measures is based on old British units, it was not revised when the Brits enacted the Imperial System in 1824. Consequently we wound up with a “Queen Anne wine gallon” (231 cubic inches), 17% smaller than the British gallon. Our bushel (2,150.42 cubic inches) is 3% smaller than theirs, too, and our ton came up short as well. I chalk it up to unresolved motherland-issues from when we were a colony.

For those of us not endowed with a math mind, the U.S. Customary system is an imperial pain in the brain. If 16 ounces or oz. (of anything but gold or silver) make a lb. or pound, how many oz. in say, 3.71 lbs? I get stuck on how “oz.” and “lb.” should sound in my head, and why we don’t get better abbreviations, never mind how to do the math without a calculator.

The rest of the world uses the metric system, born of the French Revolution. Illustration: “The metric system of weights and measures,” John Pickering Putnam, 1877, public domain

The metric system is governed by an international conference which maintains standards for the meter, kilogram, ampere, degree Kelvin, and other base units in the Système international d’unités or SI. According to the heart surgeon who sliced me open ten years ago, there is a round piece of plastic inside my heart, marked “Edwards Life Sciences 32mm. USA” It sounds a lot more professional than “15/16 of a barleycorn,” three of which once equaled an inch.

I would really like to see a push toward modernity and away from a system abandoned by the very culture that created it. As it stands, some of our products are measured in drams, minims, grains, furlongs, short tons and long tons. Americans make up only 4.4% of the world’s population. It would seem prudent, not to mention economically advantageous, to measure our goods in a way the rest of the world can more easily understand.

However, if I ever score a Troy ounce of gold or silver, I will not complain about units.

1 Comment on “Rods, yards and ounces: Taking the measure of science”