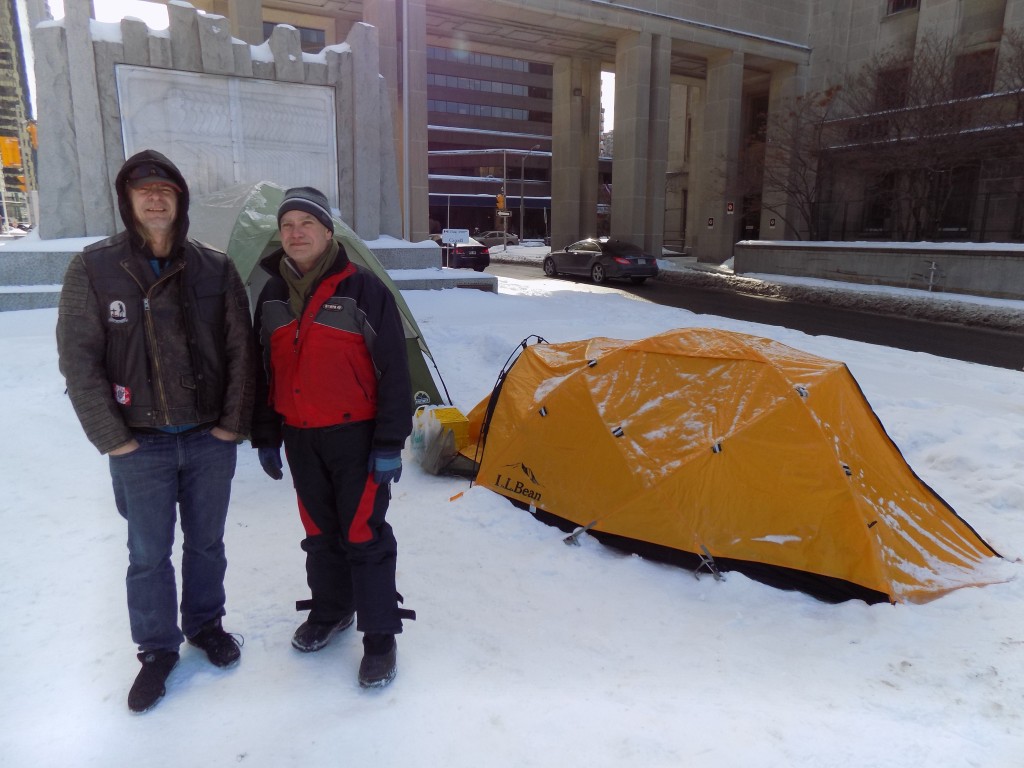 Canada has a small military with just under 66,000 active personnel in the army, navy, and air force. But, because of decades of contributing to military campaigns throughout the world, Canada still has veterans, and many of them are struggling with the federal bureaucracy and politicians to get adequate benefits. In 2006, the federal government replaced life-long veteran’s pensions with lump sum payments, rehabilitation programs, and income supplements. That led to a significant backlash from some veterans, and one group of them sued the government and demanded a return to the former system.

During the 2015 election campaign, Justin Trudeau promised to restore the old veteran’s pension system if the Liberal party won the election. The Liberals won, but the system has not changed. Trudeau said that veterans should not have to go to court to fight for their benefits, but the government has continued to defend itself in court against the lawsuit. Prime Minister Trudeau has faced sharp criticism over various government projects and spending measures while the veterans issue remained unresolved. At a recent town hall-style meeting in Edmonton, Trudeau responded to a question from a disabled veteran with “You are asking for more than we are able to give.”

Camping for the cause

Army veterans Trevor Sanderson and Dick Groot both ended up homeless because of they say they could not get the support they needed. Both of them recently spent six days camping in the median of Lyon Street in downtown Ottawa, by the World War II Memorial Arch as a protest for better benefits and treatment. Groot served in the 16 Service Company of the 38th Canadian Brigade Group, an army reserve regiment from Saskatoon. Sanderson served in the Princess Patricia’s Canadian Light Infantry (PPCLI) in Calgary. Both veterans have post-traumatic stress disorder (PTSD) related to experiences they had during training exercises in Canada. 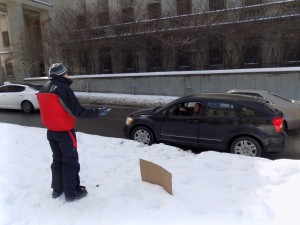 Dick Groot talks with a supporter who stopped her car to offer help. She then left to buy propane for the veteran’s camp stove. Photo: James Morgan

Sanderson said he has hitchhiked from Sydney, Nova Scotia to Toronto as a homeless veteran, but organized benefit events like picnics in communities for veterans during his travels. Groot, who became homeless more recently, said he used to visit schools and talk to students about the importance of remembering the sacrifices made by veterans.

They explained that their impromptu Ottawa campsite was conveniently on federal land so they could take advantage of the law which allows Canadian citizens to camp on public land for limited periods of time. They said the Ottawa city police visited them and expressed concern about their camp, but the two veterans said the city police only have jurisdiction over the municipal street, and not the federally-owned median in the middle of it.

Sanderson said Royal Canadian Mounted Police (RCMP) officers who patrol the area as well as guards in the Canadian Corps of Commissionaires who provide security in nearby federal office buildings offered their individual support. Many members of the Commissionaires are former armed forces and RCMP personnel and all retired RCMP members are considered veterans because the force is classified as “light cavalry” under Canadian law. The campers also had public support. On Tuesday, two different motorists stopped their cars to ask if the veterans wanted any food or supplies. One woman went to buy propane for their camp stove and another woman went to buy a few groceries for them. 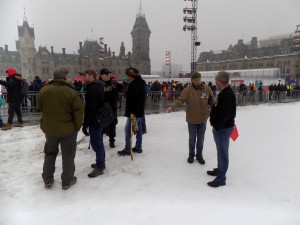 Veterans gathered to protest on Parliament Hill on Thursday, February 15. A group of mostly children demonstrated in the background in support of First Nations youth. Photo: James Morgan

Dick Groot explained that many veterans formed the “ABC” or “Anything But Conservative” campaign during the 2015 election campaign because of the pension and benefits changes made by the former government of Prime Minister Stephen Harper. However, he said that the Trudeau Liberals have been worse because they didn’t do anything to change the situation. Sanderson said that it probably would not matter which political party was in power because none of them have a good record of providing adequate support for veterans and that the problems have been building for decades. Sanderson also criticized the Royal Canadian Legion, the only main veteran’s organization in Canada, for not adapting to the changing age and experience of veterans. 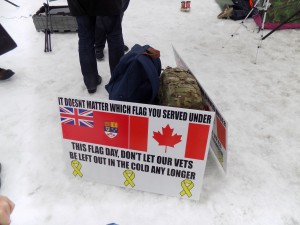 February 15 was the 53rd anniversary of Canada’s red maple leaf flag. This sign at the veteran’s protest showed the pre-1965 Red Ensign that many Canadian veterans served under. Photo: James Morgan.

The small campsite did manage to catch the attention of politicians nearby on Parliament Hill. Veteran’s Affairs Minister Seamus O’Regan and a few other Members of Parliament visited them. Sanderson said he was hoping Prime Minister Trudeau would meet with him.

The camp continued until Thursday, when Sanderson and Groot assembled with other veterans from across Canada on Parliament Hill to protest for better benefits and for easier access to services. The group gathered on Thursday morning in front of the Centre Block and were a contrast to a larger, adjacent protest of mostly children rallying for better treatment of First Nations youth.

A sign of more federal support for veterans arrived on Thursday afternoon. According to the CBC, the government is spending CDN$622 million on the Service Income Stability Insurance Plan (SISIP)—the disability insurance plan for veterans which was facing a financial shortfall. That funding, and anything else that might assist veterans, will be included in the federal budget, which will be officially tabled in the House of Commons on February 27.