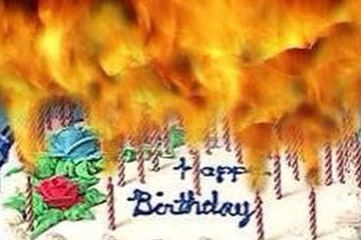 My seventeenth year of writing a weekly message to NCPR listeners and friends begins in a few weeks. I can find text for 723 such missives. At an average length of around 300 words, that makes about 217,000 words, the length of 2-3 novels – depending on how loquacious a novelist you will endure – and with at least one full volume of my poetry salted throughout. You have been most tolerant; thank you.

They started out at a paragraph or two at most. Here is the first I can find, from April 2002:

The rule of thumb is that spring moves north fourteen miles a day. The trick is finding out where it is now. Not here, not yet – even though Martha has seen a bluebird already and I spotted a mating pair of herons flying over Rt. 11 this morning. Soon, we pray, soon. Better weather in the yard, better news on the radio… soon.

Birthdays are a moment in which to take stock, to look back and to look ahead. It makes sense, because to be in the moment means to stare at a flaming sheet cake while people with varying degrees of relative pitch belt out a royalty-free rendition of “Happy Birthday.”

As you may know, NCPR is looking at one of those big birthdays with a zero on the end – number 50. The station first went on the air March 7, 1968. We’ll mark the milestone with an open house at the station in Canton all day. Please drop by if you can. No doubt there will be a big flaming sheet cake.

Here is the Listening Post from nearest my own 50th birthday in 2003.

Is that a cake or a bonfire?

This week I reached that point in life where, if you round to the nearest century, I am 100 years old – in the company of such as Bob Hope and Strom Thurmond, were they still alive. I received among other things, a cane, (which I intend to wave), and a sample pack of Viagra, (which I intend to forward to Bob Dole).

Birthdays can be inspiring. Since I didn’t make my money the old-fashioned way, through inheritance, I’ve always had a ready eye for the get-rich-quick scheme. This week’s contribution to the genre is birthday ninjas-for-hire.

They come down ziplines out of the blue, clad in black from hood to foot, to surround you on the street. Within seconds you are bound, gagged and stuffed into a black SUV with tinted windows that rushes you off to a surprise party in an undisclosed location. Later, the silent assailants (all trained in CPR and equipped with portable defibrillators,) dump you back on a random street corner in the middle of the night.

Many happy returns of the day.

But don’t worry. My million-dollar idea for birthday ninjas went the same way as my great get-rich plan to manufacture bug-zapper earrings. You should be safe.

2 Comments on “Is that a cake or a bonfire?”