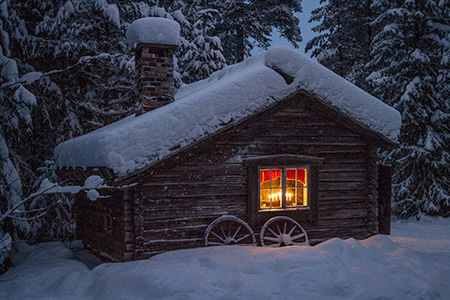 If you didn’t make it to NCPR’s 50th Anniversary Open House, you missed a pretty good bash. Thanks to the hundreds who did drop by. It made a great break from Cabin Fever season.

And if you were yacking it up down near the station kitchen you might have missed the fact that we also held a Cabin Fever Reading Call-in down in the broadcast wing from 10 to noon. By this time in the long arc or winter, reading is about all I want to do. It’s not too late to get your own picks on the list.

But now the party’s over and it’s back to seemingly endless grind of grey and snow and too little light that must be endured before spring really comes. Here’s a poem for Cabin Fever season.

By the equinox, I just want it to be over. What amusement
polar cold and darkness provides has paled. I neglect
shaving and wear pajamas late into the day, grunt replies
to the TV and eat chips while the laugh track sounds.

Cabin fever. The sky hangs so low you could whack it with a cane.
It’s above freezing for the moment. I can tell by the annoying
plop, plop, plop between the windows where the ice dam
overhangs. No way in hell I’m climbing up to chop the eaves.

What difference would it make? Weeks of freeze and thaw remain
while the jet stream staggers no-man’s land between warring fronts.
I might stir myself to salt the steps again, not that I plan on going
anywhere. Just something to do — for insurance purposes, say.

Out the window it will do whatever; I’ve gotten used to it.
The light comes, the light goes. It makes no mark on the weather
in my head. If someone asked what superpower I would choose,
at this moment, I would have to go with hibernation.