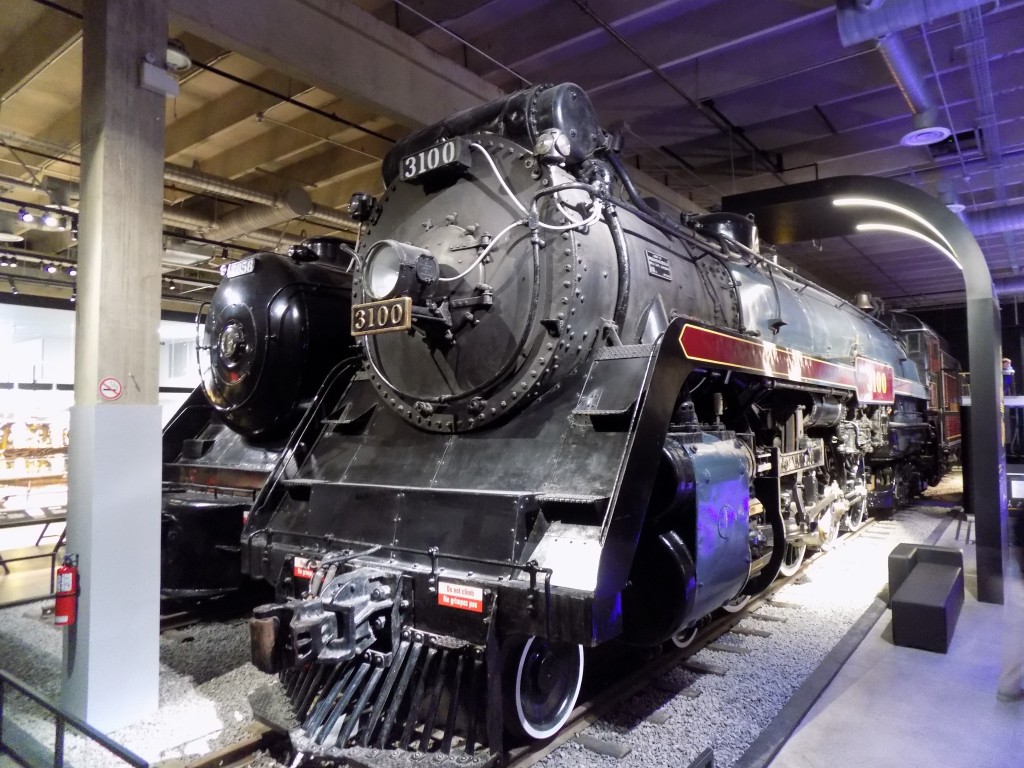 The Canada Science and Technology Museum in Ottawa reopened this fall after three years and $80 million in extensive renovations and remodeling. With a much more inviting front entrance, the facility no longer looks like a former factory, and with new and updated exhibits, the museum continues to showcase and explain Canada’s technological and scientific heritage.

When I visited last Sunday, the shortage of parking spaces and small sizes of articles hanging in the coat room indicated it is a popular place for families wanting weekend fun. My sister and her husband were visiting, and a hands-on science museum was a perfect place to take their two creative, inquisitive, and precocious children.

We began our tour in the crowded audience of the Demo Stage in the center of the museum where a staff member gave a demonstration on fire. Kids (and their uncle), get excited about things burning or blowing up.

The children were amazed by many things on display, but their favorite part was the section on the human body and medicine, called Medical Sensations. I never imagined a five year-old girl and eight year-old boy would say they enjoyed learning about how various serious diseases smell. We learned that a person with typhoid supposedly smells like freshly baked bread. I suddenly lost my desire to go into a bakery anytime soon. The eight-year-old liked the models of brains that were on display. And they both danced like crazy for a camera that shows on a screen how the skeletal, circulatory, and muscular systems of the person on camera are functioning at that moment. Later on, they had a lot of fun in the ZOOOM room, which is a free space to create and play. 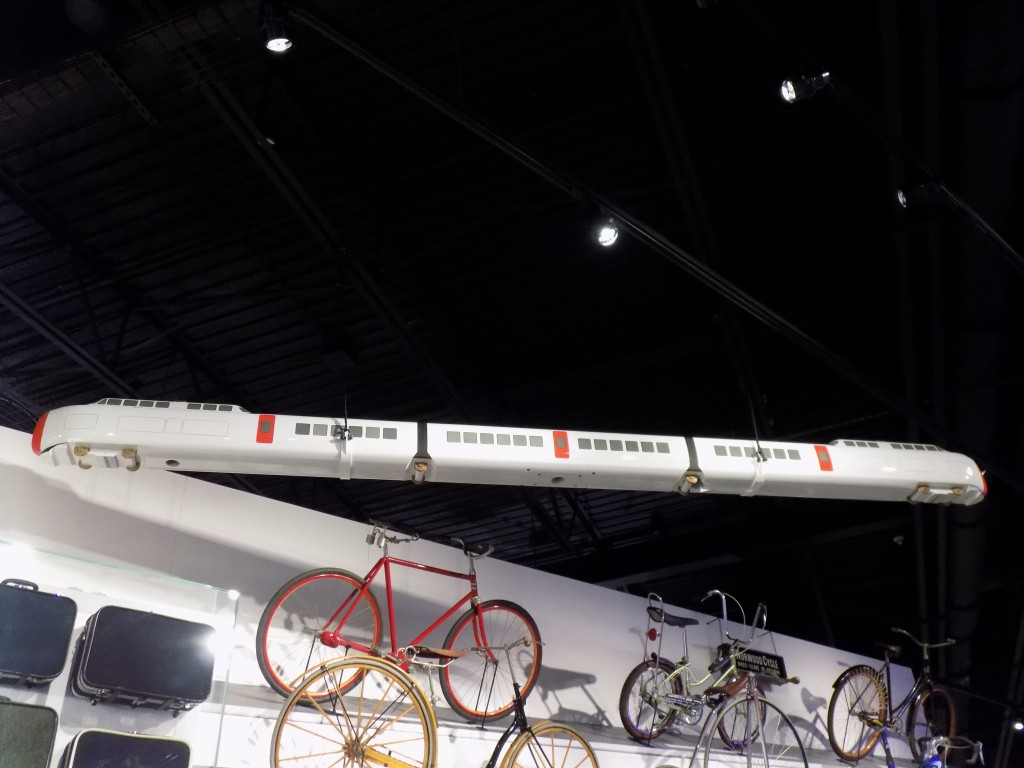 Model of the CN Turbo with bicycles in the background. Photo: James Morgan

There are 10 other sections of the museum that cover aspects of Canadian technology and how Canadians use technology. Some focus on natural resources, while others—like the steam exhibit, feature large, heavy old steam locomotives used by the Canadian Pacific (CP) and Canadian National (CN) Railways, including locomotives manufactured at Canadian Pacific’s former Angus Shops in Montreal.

Artifact Alley is full of interesting items from Canada’s scientific and technological past. There’s a scale model of a CN Turbo Train, which was developed by the railway and United Aircraft in the late 1960s to provide high-speed rail travel in southern Ontario and Quebec. The fuselage-like design traveled on existing tracks and was retired in 1982. Turbo trains were also used by Amtrak in the U.S. Much less sophisticated forms of transportation are also on display in the various sections, ranging from snowshoes, bicycles, and a 1948 Chrysler Town and Country towing an all-wood camper trailer.

Aside from the huge steam locomotives, the only remaining exhibit in the museum from before its three-year renovation is the Crazy Kitchen. It’s a small room, furnished like a 1940s kitchen, but built so crooked and lopsided that it challenges the senses of balance and perception of anyone who walks through it. The children loved it, the rest of us were slightly nauseated or developed headaches. However, a walk through the Crazy Kitchen and suffering any of the physical consequences has become a tradition for generations of museum visitors to partake of. My Mom later told me on the phone about going through it in the late 1960s. 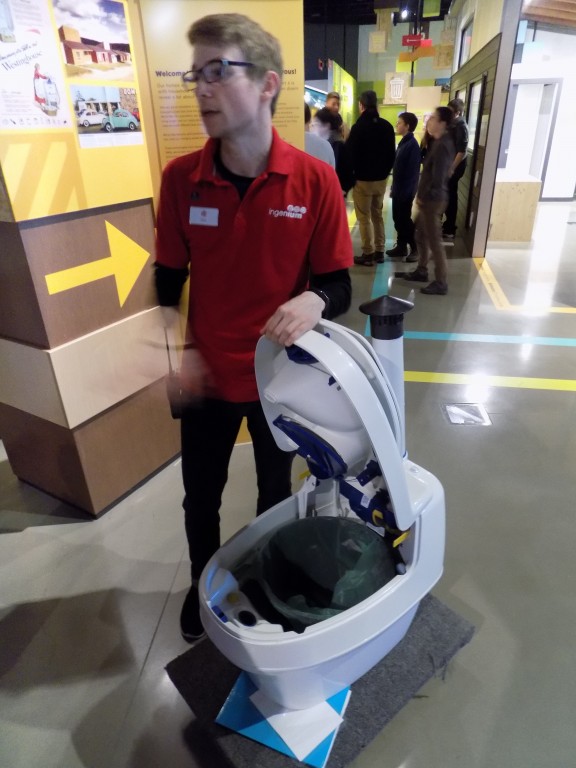 The Technology in Our Lives area showcases ordinary items that we have all had–in our homes and workplaces. The exhibit is at the cutting edge of the tiny house trend and displays technology that is used to ensure they can be built and operated efficiently with minimal environmental impact. A museum guide named Tom showed us a composting toilet that does its job so well that the waste it processes makes an excellent garden fertilizer. Oddly, the children in our group did not laugh at what was a serious conversation about the role of toilets. We don’t always think of toilets, or any other household appliance as technological, but they really are. 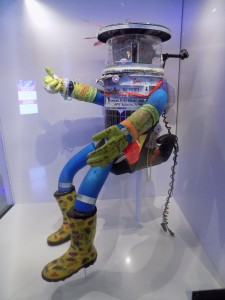 I was reminded of that when I noticed an ensemble of old lawnmowers and an early walk-behind snowblower. Two generations of the popular Easy Bake Oven are on display, including the 1980s edition my sister had that was made to look like a microwave oven that could bake small cakes with a 40-watt lightbulb.

The museum also contains items that are monuments to design and creativity. The original fabric and color samples for Canada’s red maple leaf flag, introduced in 1965, are on display.

Hitchbot is resting, seated behind glass.  It’s a solar-powered robot that was developed by two communications professors at Ontario universities that traveled across Canada in 2014 by hitchiking. Hitchbot had a brief European tour and its American journey ended sadly in 2015 after being vandalized along a Pennsylvania highway. Around the same time, NCPR also had a much less technological mascot named NCPR Bot who hitchhiked the highways of the North Country.

The Canada Science and Technology Museum is a lot of fun. The hands-on exhibits make it a great place for families, and for nearly effortless learning about Canada’s place in the technological world.