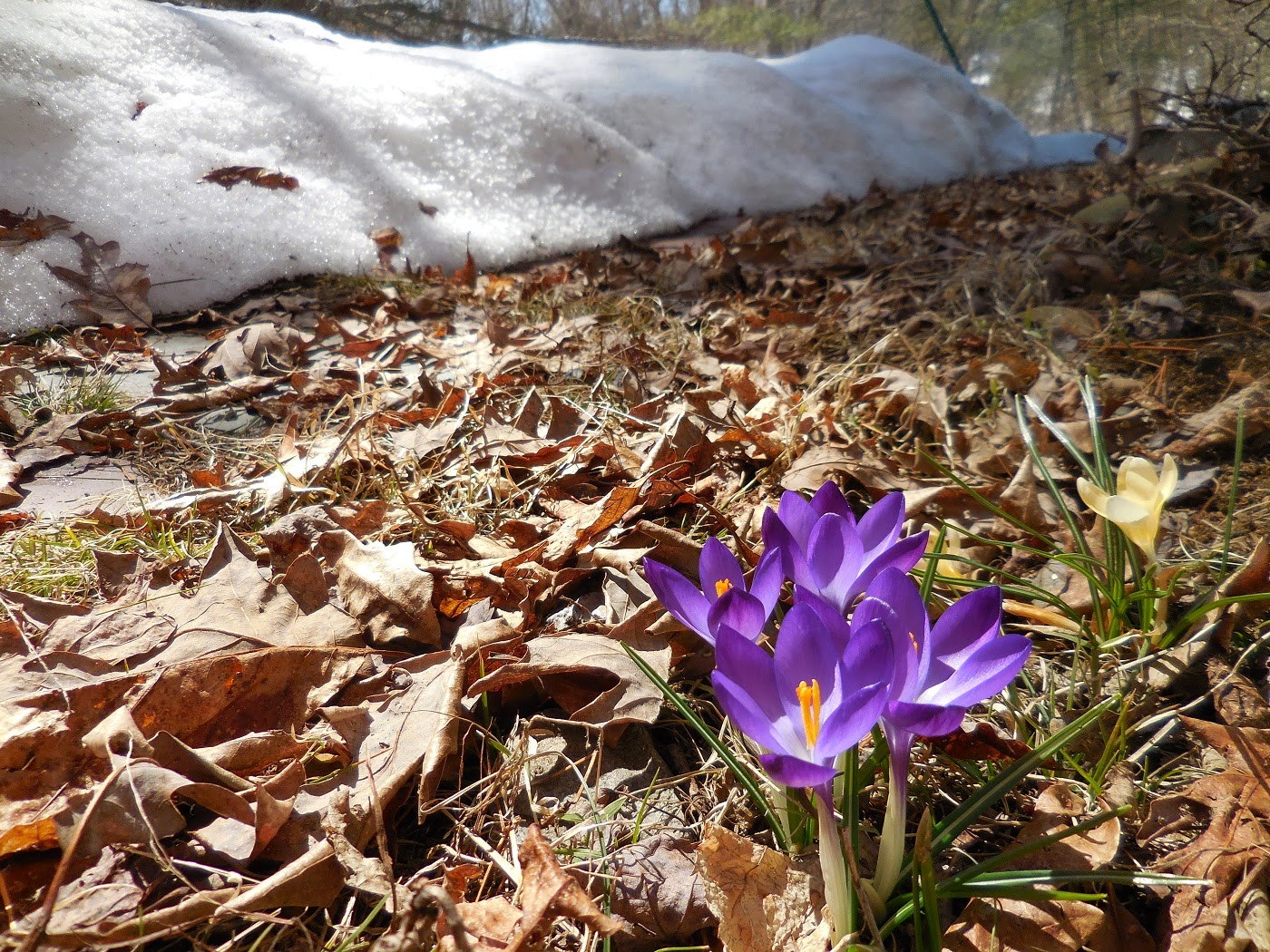 Rebecca Donnelly, Potsdam’s public librarian, has once again pulled together a list of recommendations from some of her fellow librarians–for readers of all ages.

I have a list of outdoorsy books this time, with spring finally peeking around the corner. In addition to great books on the great outdoors, local libraries have a variety of outdoor equipment to check out–literally. Anyone with a North Country Library System card can check out kids’ and adult fishing poles, tackle boxes, and snowshoes from the Gouverneur library, and life jackets (adult, child and dog sizes) from Hawn Memorial Library in Clayton!

This comprehensive guide to local birding details 60 birding sites, including Champlain marshes, boreal lowlands, mountain forests, country roads, and wild lakes and ponds. It contains 46 beautiful color photos of wild birds by Jeff Nadler and 90 black & white photos of birds and landscapes & offers tips on finding boreal species as well as a history of birding in the Adirondacks. 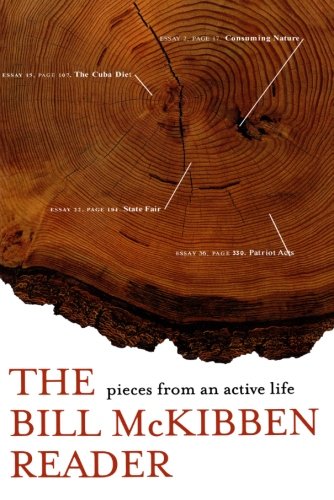 The Bill McKibben Reader: Pieces From an Active Life (2008)

For a generation, Bill McKibben has been among America’s most impassioned and beloved writers on our relationship to our world and our environment. His groundbreaking book on climate change, The End of Nature, is considered “as important as Rachel Carson’s classic Silent Spring“* and Deep Economy, his “deeply thoughtful and mind-expanding”** exploration of globalization, helped awaken and fuel a movement to restore local economies.

Roots bind people to the Adirondack Mountains. In this rich and diverse collection, local author Sandra Weber celebrates this enduring bond with the region and explores its roots and routes–such as women’s feats, the naming of mountain peaks and the fight to save forests and tiny alpine plants. From Heart Lake and Caribou Pass to Mount Marcy and Lake Tear, ride an Olympic bobsled run, unearth the destruction of a devastating fire and learn the healing powers of the mountains. Retrace the paths of Theodore Roosevelt, Martha Reben, Edwin Ketchledge, Grace Hudowalski and many others who have lived and loved the Adirondacks. Discover hikers’ tales, nature’s secrets and local legends in this collection of Weber’s finest reflections on Adirondack history and adventure.

Best tent camping, New York State : your car-camping guide to scenic beauty, the sounds of nature, and an escape from civilization by Cate Starmer (2013)

Wilderness abounds in New York State. From the Great Lakes to the Atlantic Ocean, from the Adirondack Mountains to the Catskills, from the St. Lawrence River to the Hudson, millions of acres of public lands are dotted with hundreds of campgrounds-but you probably only have a precious amount of limited time. Where should you go? When should you go? That’s what Best Tent Camping: New York State is for-to help you make the wisest use of your time in the wilds of New York. Divided geographically into seven sections-Long Island, Catskills/Hudson Valley, Central/Leatherstocking, Adirondacks, St. Lawrence River, Finger Lakes, and Western-the book is a helpful reference for camping enthusiasts throughout the state. Historical tidbits, descriptions of wildlife and the occasional personal anecdote add flavor to the campground descriptions. Star ratings and maps make choosing the best place to pitch a tent a simple task. Making reservations online or blindly over the phone can put a camper miles from the restroom, stranded with no shade, or in the middle of a busy campground trail. Maps will help campers avoid those pitfalls, and wherever possible the author has even recommended specific campsites for maximum privacy, spaciousness, or beauty. 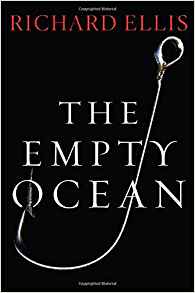 The story of our continued plunder of life in the sea and weighs the chances for its recovery. Through fascinating portraits of a wide array of creatures, Ellis introduces us to the many forms of sea life that humans have fished, hunted, and collected over the centuries, from charismatic whales and dolphins to the lowly menhaden, from sea turtles to cod, tuna, and coral.

In the fall of 2012, Katherine Roy visited the Farallons with the scientists who study the islands’ shark population. She witnessed seal attacks, observed sharks being tagged in the wild, and got an up close look at the dramatic Farallons—a wildlife refuge that is strictly off-limits to all but the scientsts who work there. Neighborhood Sharks is an intimate portrait of the life cycle, biology, and habitat of the great white shark, based on the latest research and an up-close visit with these amazing animals.

The truth about nature : a family’s guide to 144 common myths about the great outdoors by Stacy Tornio (2014)

A useful compendium for parents and children to read together, The Truth About Nature sets the record straight on nature myths once and for all. It breaks down 144 everyday nature myths, identifying how true the myth really is, with the book’s unique “myth scale” (level 1 being somewhat true to level 3 being a complete myth). Organized by season and covering facts that are so strange that they must simply be false (but they’re true!), this interactive guidebook also offers readers the chance to do their own science experiments to bust a few myths on their own.

Author Scott Edward Anderson, a poet and Conservancy development director, has carefully selected 35 preserves representative of the state’s natural diversity. In these pages he describes their trails, the species that live within them, their biological significance, and the joy that can be derived from visiting them. 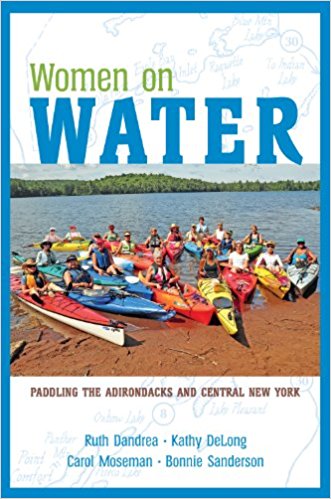 Women on Water chronicles the experiences of a group of friends as they paddle the waters of the Adirondacks and Central New York. Part guidebook and part journal, each chapter describes a trip and includes a map, directions, and other things to do in the area. Journey along with WOW as they embrace the freedom of being a girl again with kayak beneath and paddle in hand.

On the Trail: A History of American Hiking by Silas Chamberlin (2016)

In the mid-nineteenth century urban walking clubs emerged in the United States. A little more than a century later, tens of millions of Americans were hiking on trails blazed in every region of the country. This groundbreaking book is the first full account of the unique history of the American hiking community and its rich, nationwide culture.

Delving into unexplored archives, including those of the Appalachian Mountain Club, Sierra Club, Green Mountain Club, and many others, Silas Chamberlin recounts the activities of hikers who over many decades formed clubs, built trails, and advocated for environmental protection. He also discusses the shifting attitudes of the late 1960s and early 1970s when ideas about traditional volunteerism shifted and new hikers came to see trail blazing and maintenance as government responsibilities. Chamberlin explores the implications for hiking groups, future club leaders, and the millions of others who find happiness, inspiration, and better health on America’s trails.

Animals on the Edge: science races to save species threatened with extinction by Sandy Probst (2008)

Stresses the importance of saving endangered species and discusses how scientists are using the latest technology to survey animal populations, to track down and arrest those who prey on endangered wildlife, and to breed animals in captivity.

Camping activity book for families : the kid-tested guide to fun in the outdoors by Linda Parker Hamilton (2016)

The Camping Activity Book for Families offers up a wide variety of activities, games, recipes, songs, and good old-fashioned fun for parents and children together to share in the wonders of the outdoors. Whether it’s creating art using leaves and pine cones or belting out your favorite tunes while on a hike, roasting up marshmallows around the campfire or playing flashlight tag at the campground, this book engages families to partake in everything outdoors. Organized around the time of day and with age-specific recommendations, this book has fun activities for every minute and age group. 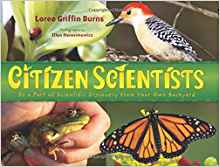 Citizen scientists : be a part of scientific discovery from your own backyard by Loree Griffin Burns (2012)

Anyone can get involved in gathering data for ongoing, actual scientific studies such as the Audubon Bird Count and FrogWatch USA. Just get out into a field, urban park, or your own backyard. You can put your nose to a monarch pupa or listen for raucous frog calls. You can tally woodpeckers or sweep the grass for ladybugs. This book, full of engaging photos and useful tips, will show you how.

With Jim Arnosky as your guide, an ordinary hike becomes an eye-opening experience. He’ll help you spot a hawk soaring far overhead and note the details of a dragonfly up close. Study the black-and-white drawings — based on his own field research — and you’ll discover if those tracks in the brush were made by a deer or a fox.

From 14-year-old Joseph Dunn who was the lone survivor of the Shark Attacks of 1916, to 9-year-old Mike Kramer who, with the help of his quick-thinking parents, survived the Peshtigo fire of 1871 (which took place on the very same day in history as the Great Chicago Fire!), to the 13-year-old girl who survived a terrifying attack by a box jellyfish, this is a collection of unforgettable narrative non-fiction stories of unimaginable destruction — and, against all odds, survival.

The Kids’ Guide to Exploring Nature by Marilyn Smith (2015)

Created by the experts at the renowned Brooklyn Botanic Garden, this book teaches children how to observe environments as a naturalist does and leads them on 24 adventures that reveal the complex ecosystems of plants and animals in the woods, at the beach, and in a city park. 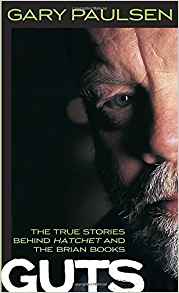 Guess what — Gary Paulsen was being kind to Brian, the character at the heart of classic books beginning with Hatchet. In Guts, Gary tells the real stories behind the Brian books, the stories of the adventures that inspired him to write Brian Robeson’s story: working as an emergency volunteer; the death that inspired the pilot’s death in Hatchet; plane crashes he has seen and near-misses of his own. He describes how he made his own bows and arrows, and takes readers on his first hunting trips, showing the wonder and solace of nature along with his hilarious mishaps and mistakes. He shares special memories, such as the night he attracted every mosquito in the county, or how he met the moose with a sense of humor, and the moose who made it personal. There’s a handy chapter on “Eating Eyeballs and Guts or Starving: The Fine Art of Wilderness Nutrition.” Recipes included. Readers may wonder how Gary Paulsen survived to write all of his books — well, it took guts.

Forced to spend the summer with her family in rural Vermont, eleven-year-old Megan, a rebellious, immature urbanite gains self-confidence and maturity as she and her dog survive being lost on the Appalachian Trail.

A robot wakes up on an uninhabited island and learns to survive from the animals who live there.