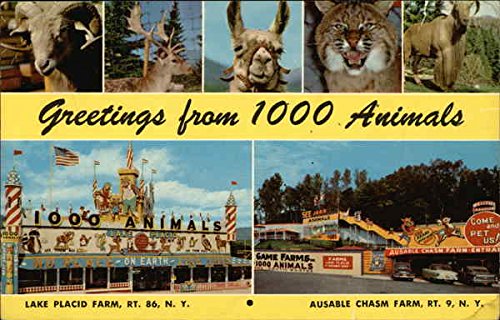 It’s getting to be the summer road trip season and I’ve been thinking about all the great (and the cheesy) roadside attractions that littered the blue highways when I was a kid. Our family traveled a lot in the summer, and with three kids and a dog, just for sanity’s sake that meant a lot of stops for leg stretching and temper cooling.

We were regular visitors to places like Santa’s Workshop in Wilmington and Stirling Game Farm’s 1000 Animals in Lake Placid, to Frontier Town and Enchanted Forest. On longer trips we toured limestone caverns, shabby reptile zoos, obscure museums and other local marvels wherever we needed to cool the motor.

And we marked progess to our destination by oddities seen out the window that might not have merited a stopover, but were always pointed out for comment.

So I was interested to stumble across Roadside America this morning, a site that crowd-sources and maps out features of interest in all corners of the country. They include the usual North Country tourist destnations, but here are a few you may have missed out on:

You do have to get out of the car and go into the Adirondack History Center Museum to see the last.

Have a great time on the road this summer – and stop poking your brother. Add in your favorite roadside stops and sights in a comment below.