Ingredients for healthy beverages are free for the taking outdoors if you can get past the introduction stage. Hemlock tea, one of my favorites, is a good example. This is not the recipe poor Socrates used, which was made with the toxic perennial herb, poison-hemlock. The kind I serve is a vitamin-C-rich infusion of needles and young shoots from the stately eastern hemlock tree, Tsuga canadensis. This hemlock tea is great with a touch of honey, and the good part is that you can drink it more than once. Plus it’s fun to see the reaction when I offer it to guests. 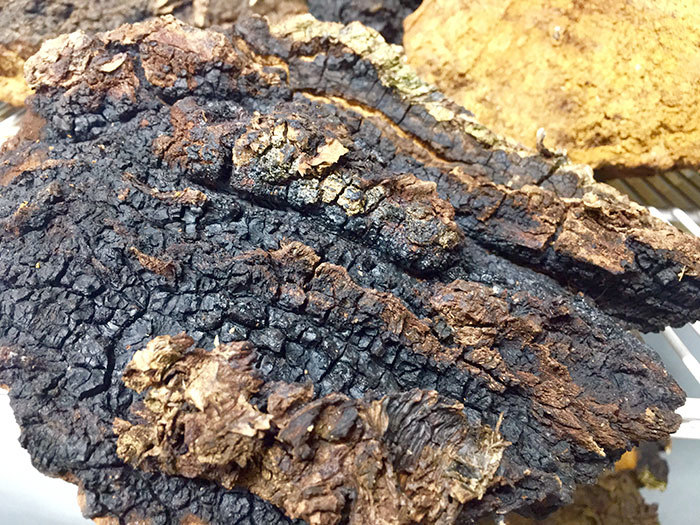 Once harvested, chaga conks, which look like burnt charcoal, are allowed to dry before being ground into powder. Photo: Todd Moe

A drink that is even more likely to empty your kitchen of visitors is parasite tea. Obviously some explanation is in order. For centuries, possibly millennia, tea made from Inonotus obliquus, a parasitic fungus that afflicts primarily birch trees, has been consumed in northern latitudes around the world as a medicine as well as a pick-me-up. Sometimes called cinder-conk because it looks as though it has been charred black, this native fungus is often called chaga in North America.

The health benefits of mushrooms such as reishi and shiitake have become more widely known recently, but chaga is odd because it is not a mushroom. Most fungi reside out of sight in the soil or inside tree trunks, and we only know they are present when they send up fruiting bodies (spore-bearing structures), known to us as mushrooms. Chaga’s fruiting bodies are tiny, and remain under the bark unseen. The irregular, charcoal-colored chaga you may see protruding from a birch tree is actually the mycelium, or main body, of the fungus which is otherwise busy rotting the heart out of that particular tree. 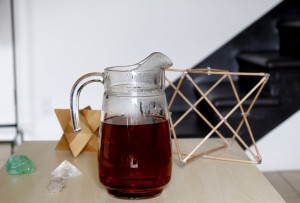 While it is not good for trees, chaga has many reputed health benefits for humans. From the Ainu in northern Japan to the Evanki in Siberia to the Anishinabe in North America, chaga is respected by scores of indigenous cultures across the Northern Hemisphere. It is reputed to have antioxidant and adaptogenic properties, and I find it gently boosts energy without being a stimulant. These days chaga is becoming popular in mainstream culture in North America, which is good news only as long as it is harvested sustainably. It can take a decade for a softball-size conk—the smallest which should be harvested—to develop.

It stands to reason that it would be handier to grow chaga on a commercial scale than to scour the woods for it, and the fungus has been successfully cultured on various media. But just like wild vs. field-grown ginseng, “tame” chaga lacks many key elements compared to its natural form.

It is heartening when science catches up with ancient wisdom. The website of the National Center for Biotechnology Information (NCBI), a branch of the U.S. National Institutes of Health, abounds with peer-reviewed studies on chaga regarding its anti-cancer attributes. The articles on the NCBI site conclude in glowing terms about the potential for chaga to combat many types of tumors, including liver cancer. By glowing terms I mean things like “Chaga extract caused G0/G1-phase arrest and apoptotic cell death in a dose-dependent manner.” One very recent study, though, contained actual English: “The results of this study indicate that daily intake of the I. obliquus extract has anti-cancer effects.” Pretty clear.

I first met chaga at the end of my rope. As a climbing arborist working in Saranac Lake, I had the task of swinging out to rig the snapped-off top of a huge old paper birch from the roof of a building. It had broken right at the site of a big chaga mass, which had caused extensive decay. Sadly, it all went through the chipper that day—if I had only known.

Chaga also seems to be particularly good at retaining an ember without burning up, and I am told it was used to carry fire between campsites. Once at a “primitive skills” gathering I met a guy who could light chaga by compression, which is kind of cool. A tiny chunk was placed on the end of a short rod, which was carved to fit tightly into a hole drilled in a piece of horn. By slamming the rod in very fast, the heat of compression lit the chaga, much the way a Diesel engine runs on heat generated by compression. He pulled out the rod with the glowing chaga on the end and lit his cigarette. It was an impressive way to light up, but I think he missed the point about chaga’s health benefits.

As with all natural supplements, you should check with your healthcare provider before drinking chaga tea. Or smoking cigarettes for that matter.