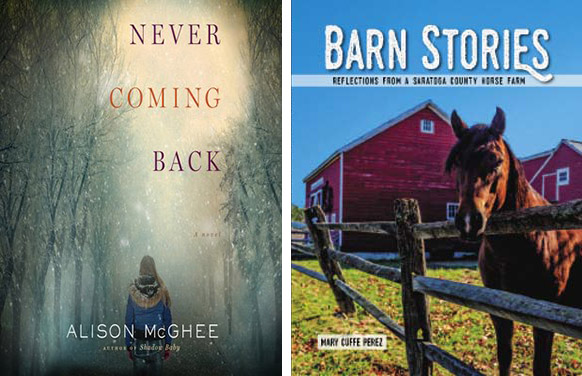 Are we more or less critical of fiction set in a location that we know? It’s make-believe and doesn’t have to pass a fact check but what if it mentions places like Old Forge and Inlet?

Alison McGhee’s novel Never Coming Back takes place in Sterns, an imaginary hamlet somewhere near Old Forge. Many of the details feel authentically Adirondack and the story is one that is not unusual in the North Country—a grown daughter who has moved far away must come back to her remote hometown to help take care of her aging mother.

Much of Never Coming Back takes place during winter but this would be a fine summer read. The main character, Clara, narrates in a cheeky, ironic voice that sometimes lapses into despair (her mother is fading quickly with early-onset Alzheimer’s disease) and always plays with language and words (Clara is a writer). Here is Clara and her new boyfriend, who she calls “the bartender”. They’ve been on a walk and have ducked into Adirondack Hardware in Old Forge to get out of the extreme cold. Clara gives her boyfriend a kiss:

It was a shadow kiss, a whisper of a kiss, a kiss that neither of us could feel because our lips were so cold from the cold Adirondack pre-winter. But maybe we could feel it, maybe we did feel it, maybe the bartender felt it the same way I felt it. As if an unseen someone had been collecting invisible tinder and invisible twigs and invisible small, perfect fireplace logs for years and years and years, and had built them into a perfect, invisible pre-fire. And our cold whisper of a kiss was a struck match, and now the fire was burning between us.

And if you finish reading Never Coming Back and want more, McGhee first published  a book with Clara as the protagonist in 2003 with her novel Shadow Baby. I haven’t read it, so if you do, let me know what you think.

Another excellent choice for the summer is Barn Stories—Reflections from a Saratoga County Horse Farm by Mary Cuffe Perez. This book delighted me with its fine writing and short two or three page vignettes. It is a book for people with short attention spans but it also has a wonderful sense of place. I could totally see that country barn and its equine, feline and human inhabitants.

Perez was the manager of a small farm that boarded horses and her observations are precise and wise. She writes about horses, of course, and their distinct personalities, but also about the people who come to the barn, including a young girl, Amanda. Perez writes:

Amanda entered the barn’s story the way barn cats do. It was the first warm day of early spring. Angel was on cross-ties in the center bay while I raked through her winter coat with the shedding blade. She’d been half-dozing when something yanked her to attention. A small figure appeared, standing in an avenue of light between the barn doors, twisting a grass stem between her fingers. She did not enter until I motioned her in; then carefully, as if the floor might give way under her. I guessed she was about ten years old. All joints, loosely assembled, red hair pulled into a pony tail, large chestnut-colored eyes, and a dead-serious expression.

Amanda shows up in a few other chapters, one of them a sad piece about the shifting alliances of childhood friendships.

I’ll admit that I wasn’t expecting to be impressed by this book. I’m not a “horse person” and memoir is not my favorite genre. But Barn Stories drew me in with its fine writing and miniature, polished chapters. See if your library has a copy and if it doesn’t, donate one, after you read it of course.