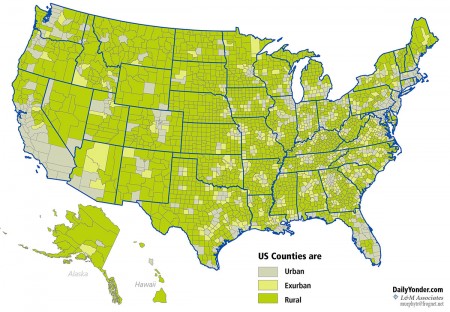 Our political divide is in every state. The United States: By Rural, Urban and Exurban Counties. Map: Daily Yonder, Center for Rural Strategies

It’s simple really: This election is divisive because we Americans are actually really divided. There’s been a lot written about Donald Trump’s outrageous rhetoric, Hillary Clinton’s deep unpopularity, disarray in the Republican Party, and the role of a more scattered, frenetic media.

All of that’s true. This is a unique political year, a perfect storm. A lot of ugly trend-lines converged in 2016 at the same time, testing our democracy, not to mention our patience. But it’s important to remember that democracy is actually a mirror of our passions. Across America, citizens are utterly at odds over which direction our country should take.

In more rural conservative circles, voters want a more isolationist and protectionist nation, with less immigration and less free trade. More fraught and dangerous are the ideas gaining traction in conservative communities about race and religion. The right moved closer this year to openly rejecting the idea of an American melting pot, embracing instead the belief that white Christian culture is and must remain the nation’s center of gravity.

Meanwhile, on the left, there are growing demands that long-established privileges and prerogatives held by whites — and in particular by white heterosexual men — be dismantled. Liberals have embraced the idea that anyone not actively harming someone else is an equal American and deserves a level playing field. They’re not on the fringe, they’re not alternative, they’re not transgressive. They’re just American. That means they should have full marriage rights and an equal paycheck for equal work.

The left has also adapted to the idea that America will be an increasingly diverse nation, managing its engagement with a complicated world in part by bringing that world here, right into the heart of our thriving cities and suburbs. This group of citizens also, in ever-accelerating numbers, rejects the idea that Christianity should define our public discourse and policy.

And here’s a big one, a real corker of a family feud: America’s left has broadly accepted the conviction that climate change is the defining challenge of our time. Meanwhile the right believes that opposition to big government (likely the only tool that can battle climate change on a global scale) should be the defining battle cry. How do you reconcile those different worldviews?

So the noisy, raucous, and sometimes shocking divisions we’ve seen in 2016 reflect a growing chasm, not a ginned-up political circus. Yes, this chasm has been exacerbated by things like a broken news media and a broken Republican Party. If both of those important institutions were healthy, America’s deep divide might have been channeled into a more constructive conversation.

On the other hand, there is something honest in what happened this year, something raw and blunt. Far more than John McCain and Mitt Romney, Donald Trump opened a window into our national rift that had been papered over. I think that’s healthy. The brutal conversations that happened on Facebook? Maybe they reveal more about our anger and divisions than the measured, even-handed reports we hear on NPR.

Solutions to our national divide? I honestly don’t know. But here’s one thing that I think will help. This rift isn’t between red and blue states or between the Bible Belt and New England. This divide falls within each American state, a faultline between ever more diverse urban areas and more uniformly white rural towns. So we really have fifty different experiments underway in bridging the chasm, and that’s good.

First, it seems inevitable that urban areas will win more and more political and economic power. In much of the U.S. this has already happened. In a democracy, power shifts to the places where the most people live. But this loss of influence is deeply unnerving and even enraging to rural whites. A healthy society should manage this transition carefully, with respect and sensitivity.

If urban areas and their leaders steamroller rural areas in more and more parts of the country, imposing big city cultural values and regulations, while failing to help small towns transition to a more prosperous future, I fear the red rage marshaled by Donald Trump’s campaign will be a harbinger, not a culmination.

Second, it’s important to remember that as fundamentally divided as we are, as angry and frustrated and flummoxed by our neighbors as we feel, the overwhelming majority of us are expressing ourselves peacefully. We’re fuming on Facebook, not firing pistols. We’re casting ballots, not bombs. And when we Americans go to the polls, we will, like it or not, make the journey together.

15 Comments on “Why this election is so divisive”