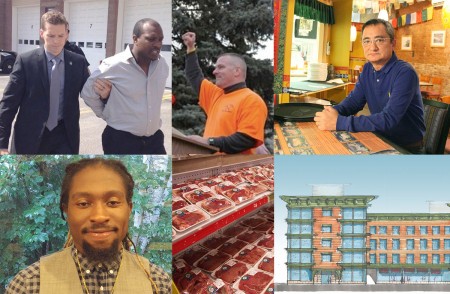 This is the season of generosity, kindness, reflection, love, compassion and of course, top-ten lists. News and other media organizations around the world are making their lists of “best stories” and “year in photos” and checking them twice right about now. NCPR is no exception, and this year we bring you our own, first ever, top ten stories-of-the-year list.

Ending with the #1 most viewed story, here they are, the ten North Country stories that mattered most to you, our friends, the people of the North Country: Aaron Mair is president of the Sierra Club board of directors. Photo: provided

Not long after he spoke at a conference focusing on diversity in the Adirondack Park, the national head of the Sierra Club found himself in the middle of an ugly incident in Essex County.

Aaron Mair was on a photo shoot along the Schroon River for an Adirondack Life magazine story when a group of rafters, who were white, began using racial slurs, including the N-word. A top tourism marketer in the Adirondacks said she sometimes routes visitors who are people of color around places where she’s “not confident they’ll have a positive experience.” Zach Hirsch speculates that this police blotter story got heavy web traffic from its similarity to an episode of Trailer Park Boys – a mockumentary TV series featuring a group of Canadian trailer park residents. Seriously.

An artist’s rendering of the mixed use building, which could be used for retail, housing, and office space. Photo: City of Plattsburgh.

In July, the City of Plattsburgh won a state competition for $10M to revitalize its downtown.  Initial reports indicated a focus on converting a large parking lot on the Saranac River into a mixed-use area. City officials now want residents to weigh in on a longer list of options. Plans are due in March. Anybody who’s driven through St. Lawrence County knows this sign.

by Natasha Haverty and David Sommerstein

This investigative piece first aired in June 2015, four years after the murder of Garrett Phillips shocked Potsdam and the region. It grabbed attention again this year as the trial of the accused, former soccer college coach Nick Hillary, approached. He was acquitted in a bench trial in September. North Country Public Radio was able to confirm significant parts of Alvin Codner’s account of two racial incidents in the Adirondacks this summer. The Florida man was visiting the Park for the first time when he was called the N-word and threatened. Photo: Brian Mann

6. Are black visitors really welcome in the Adirondack Park?

Millions of people visit the Adirondacks and Thousand Islands tourist destinations every year. The vast majority are white. A series of troubling incidents in the Adirondacks this summer sparked a regional conversation about whether non-whites are welcome, or safe. (See #10) The corrections industry, one of the top employers in the North Country, is on the down side of an up and down history. Gov. Andrew Cuomo has already closed 13 state prisons; speaking at a church in Harlem last January, he said he would close more. He said he wants to go down in history as the governor who closed the most prisons in the history of the state. No additional prisons closed this year. “I’ve been hunting since about 6th grade,” said Michael Servant, one of the students at Paul Smith’s College. “The guns that I had on campus were a .30-30 lever action rifle for deer hunting and a 12-gauge pump action shotgun for small game and waterfowl.” Photo: Michael Servant, used with permission.

Mass shootings at schools and colleges shock and frighten communities, and help drive deep divisions over gun violence and gun control across the country. Paul Smith’s College embraces firearms as part of a campus culture that welcomes student hunters and their long guns. There is a student Fish and Game Club, and a secure armory on campus. Michael Powers, head of NYSCOPBA, speaking at a rally in Albany to save the Ogdensburg Correctional Facility when it was slated for closure by state officials, a decision that was later reversed. Archival photo from Powers’ website, used by permission

A story and editorial in the Watertown Daily Times alleging inmate abuse and a systematic cover-up at Ogdensburg Correctional Facility prompted a boycott of the Times and the Johnson Newspaper chain.

The story came as New York’s Inspector General and the U.S. Attorney’s office were investigating claims of racial bias against black inmates and prison guard violence. Federal civil rights charges have been brought against a number of former officers; an alleged murder of an inmate at Fishkill state prison is still under investigation.

Correction officers have argued that the real issue in state prisons is growing violence against staff.  But a new contract now up for ratification by the state corrections officers’ union would establish new disciplinary procedures for officers accused of mistreating inmates. As the much anticipated trial in the 2011 murder of 12 year-old Garrett Phillips (see #7) approached, NCPR partnered with the Watertown Daily Times to look hard at the police investigation – including interrogations, a lack of physical evidence or eye witnesses, and controversial DNA sampling — that would be the foundation of the prosecution’s case. (Oral “Nick” Hillary was found not guilty in a bench trial in September.) Tenzin Dorjee, one of the owners of the Himalaya Restaurant in Plattsburgh, was repeatedly harassed in the days after the presidential election. Photo: Zach Hirsch

1. Harassed, afraid, a North Country immigrant fights back with love

This story’s headline speaks for itself. In the week following the 2016 presidential election, a Bhutanese immigrant and naturalized citizen faced harassment and intimidation in Plattsburgh, the city he and his family have made their home. He thought about buying guns for self-protection, but is fighting back with love and compassion instead. Each of the above are examples of stories that were important to you in 2016. But what drew more attention than any of those single stories, was the thread of multiple stories that collectively made up our coverage of the trial of Nick Hillary.

NCPR committed three reporters to daily coverage at the trial, including a photographer in the courtroom pool that supplied regional and national media with photos of the entire trial. We also produced a daily podcast for the duration of the trial, along with several in-depth reports, explainers, an interactive map, a look at the judge, and even a trial FAQ, all pulled together in a daily Tumblr update.

But what about that story…

Of course the list of stories that mattered to you this past year could go well into the hundreds. Our news department has been busy in 2016, like every year, and there’s been no shortage of important people, places and events to cover in the North Country. But since this is an end-of-the-year top-ten list, we’ll stop here at eleven.

Feel free to share your thoughts on these stories and any others that stand out in your memory from this year in the comments below.