Subscribe
iTunesSpotifyGoogle PlayRSS
by Paul Hetzler on May 28th, 2017 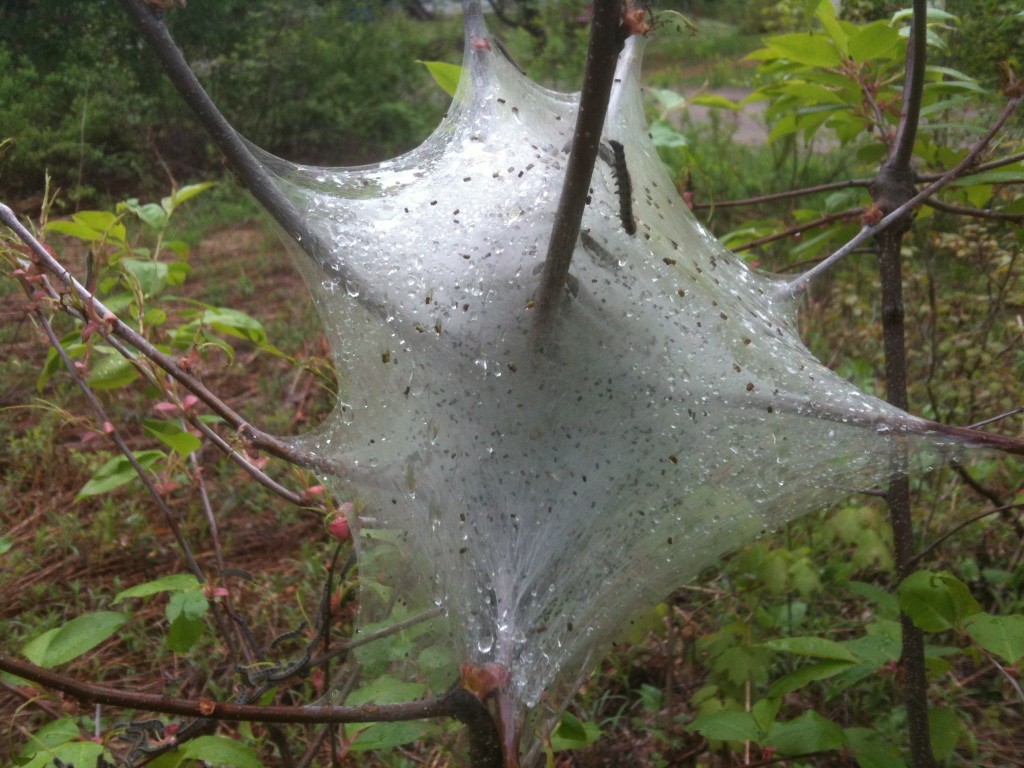 Given the cool rainy weather of late, one wouldn’t think tenting would be popular. But tents are everywhere this spring. They do not seem to respect sanctioned camping areas in NYS forests, and many have even invaded posted lands. The tents in question here, of course, do not belong to people. They are the white silken nests of eastern tent caterpillars (ETC), which are less welcome than trespassing hikers.

Yes, tent caterpillars are back, like a B-grade horror sequel. Or maybe it is a remake—the last time we had an infestation was about ten years ago. Actually the creepy crawlies never left, but merely bided their time for a few years, probably cooking up fertility drugs or something. Late last summer, ETC female moths laid eggs in light-brown masses resembling dabs of spray-foam insulation. Though the babies hatched in late April, the tents did not become noticeable until recently. 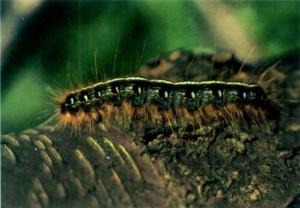 Variously known as tent worms, army worms, and a host of other names not suitable to print, there are actually two species of tent caterpillars. The eastern tent caterpillar prefers trees and shrubs in the family Rosaceae, such as cherry, apple and crabapple. It is a dark caterpillar with a single white stripe down its back. The forest tent caterpillar (FTC), which would like to take credit for building tents, does not in fact make a nest. It is identical to ETC but has a row of keyhole-shaped “footprints” down its back instead of a stripe. Both species are native.

Eastern tent caterpillars hatch about a week earlier than their forest tent caterpillar cousins, and have a head start right now on damaging trees. As mentioned, they prefer fruit trees, but they’ll turn to other host plants if they empty out the fruit bowl. ETC is of special concern to horse owners, as they are known to cause pregnant mares to miscarry when the mares accidentally eat caterpillars that are in the pasture grasses. 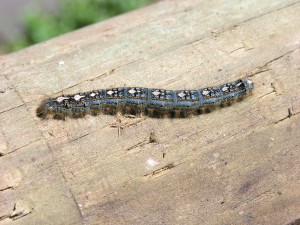 It is the forest tent caterpillars, though, that pose a bigger threat to woodlot owners and maple sugar producers. The FTC will start to make its presence known in a few weeks. They’re small right now, a half inch or less, and while the cool rainy weather has put a damper on their activities, they’ll grow fast. Some areas of St. Lawrence County are seeing minor to moderate defoliation.

A single severe defoliation can weaken a tree, and in maples can significantly lower sap sugar content for one or more years. A repeat defoliation will further damage trees, making them more susceptible to other stressors such as lecanium scale insects (which, aside from hurting trees, leave sticky droplets on your windshield if you park under a maple). Timber managers as well are watching how the caterpillar outbreak progresses.

It may seem like needless worry over a phenomenon that has been recurring for a few thousand years. Indeed, under ideal conditions only 15-20 percent of overstory trees die as a result of consecutive defoliations, according to Dr. Douglas Allen of SUNY-ESF. But trees have never experienced water stress like they have in the past two decades, especially in 2012 and 2016. It may take two to three years for a tree to recover from such prolonged dry spells. Other pests like scale only add to the stress. As if that wasn’t enough, a researcher at the University of Alberta discovered that outbreaks in fragmented forests last much longer than those in large unbroken tracts of forest.

In the past, some maple producers had their sugar bushes aerially sprayed to control tent caterpillars. The best product for killing them is a called Bt (for Bacillus thurengiensis, the organism that makes the toxin) and is available under various trade names like Dipel or Thuricide. Bt is nontoxic to humans, wildlife and other insects. In cases of bad tent caterpillar outbreaks, timber managers may want to consider delaying thinning operations in the most heavily infested stands, as harvesting operations can further stress trees. Horse owners with a pregnant mare would do well to try and limit ETC around pastures. Such controls might include removing host trees or even spraying a band of insecticide (use per label) around the perimeter.

Homeowners can use Bt on their yard trees, but you’ll have to hurry to control the eastern tent caterpillar, as they’re getting past the life stage that’s easy to control. Since they congregate in their nests in daylight, their nests can be thrown to the ground and squashed where they’re reachable. Do not attempt to burn out their nests—it damages the tree, is dangerous, and does not even kill very many caterpillars.

Forest tent caterpillars are still small enough that there’s time to spray Bt, and while they can sometimes be found on the same fruit trees as ETC, a professional spray rig would be needed to reach into the canopy of the mature trees they infest. When these pests eat up one food source they’ll travel to seek another. Using sticky traps like ‘Tanglefoot’ and other brands on the trunks can help protect small yard trees from getting invaded by hungry hordes on the march. Watering yard trees during dry periods can help them recover from defoliation.

There are many natural controls for tent caterpillars like viruses and fungi, but it takes a few years for these to build up to the point where they bring down the caterpillar population. Infestations typically last from two to four years in large tracts of forest, and up to six years in small blocks. One reason fragmented forests have longer infestation times is that sunlight inhibits a caterpillar-killing virus. A species of non- biting fly parasitizes caterpillars, so although these flies can be a nuisance themselves, remember what they’re doing. Unfortunately, no birds native to the area are known to eat the tent worms.

While we may not see a bad tent caterpillar outbreak for a few years yet, keep an eye out for tents.