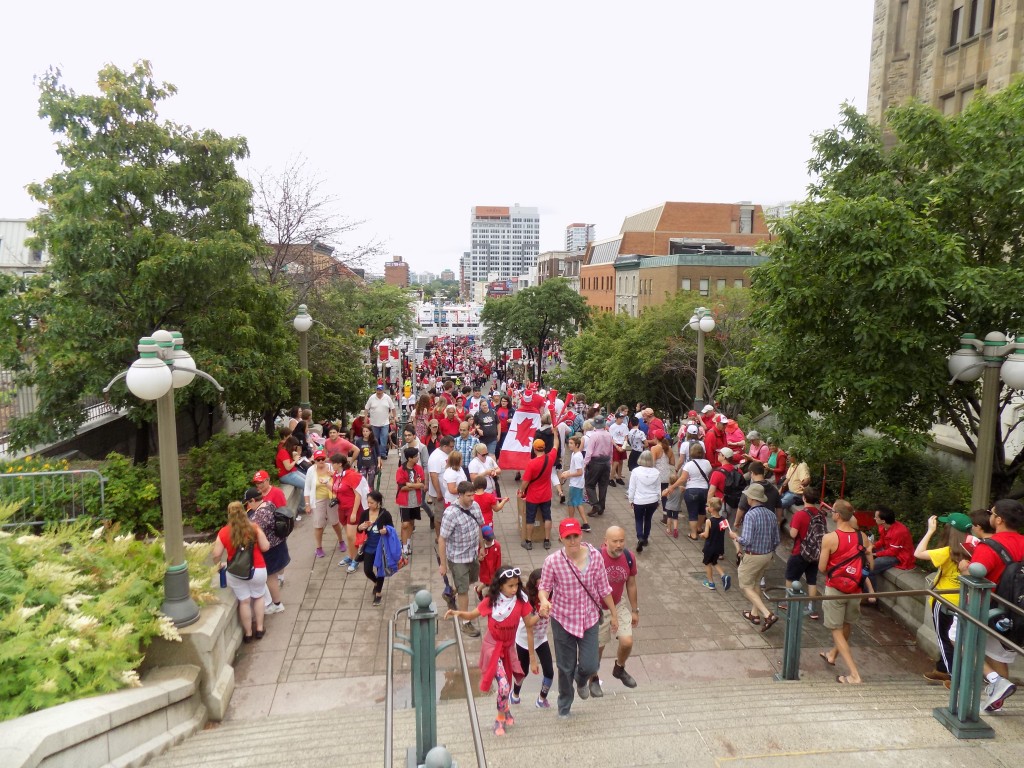 The Canada Day crowd seen from the York Steps towards the By Ward Market. Photo: James Morgan

I had never seen a crowd like it before. Hundreds of thousands of mostly red-and white clad people descended upon Ottawa and Gatineau for Canada Day and the 150th anniversary of the country. I’m not a big fan of big crowds, so I decided that going anywhere near Parliament Hill was not an option, but I still wanted to try and see some of the action. 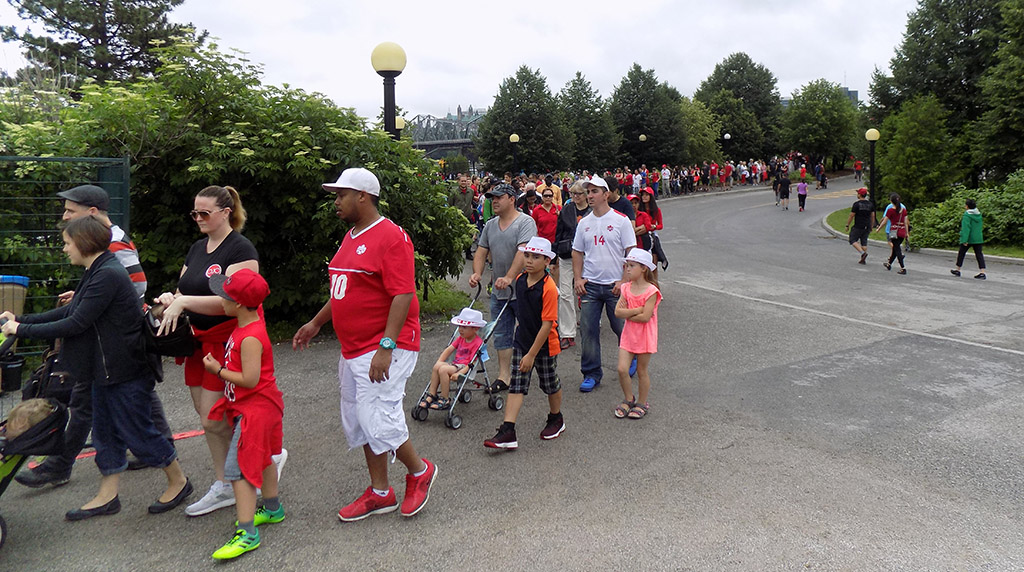 I parked my car on a quiet Gatineau side street and decided to walk the rest of the way. I wore hiking boots, carried a walking stick, and took lots of water. It was a hike through a congested, urban jungle.I arrived at Jacques Cartier Park where Mosaicanada display is. It’s an amazingly elaborate topiary (sculpted shrubs and plants) exhibit that covers several acres. The line to get in was about a quarter of a mile long. All bags had to be checked by security, too.  Mosaicanada continues for three more months. I decided to check it out on a quieter day.

Over at the Canadian Museum of History, the line was almost as long to get into the newly re-opened Canada History Hall. Prince Charles and his wife Camilla had officially inaugurated the new exhibits earlier in the day. I decided to skip it and go back when it’s easier to enjoy the content. There were a few activities and entertaining things happening on the museum grounds. 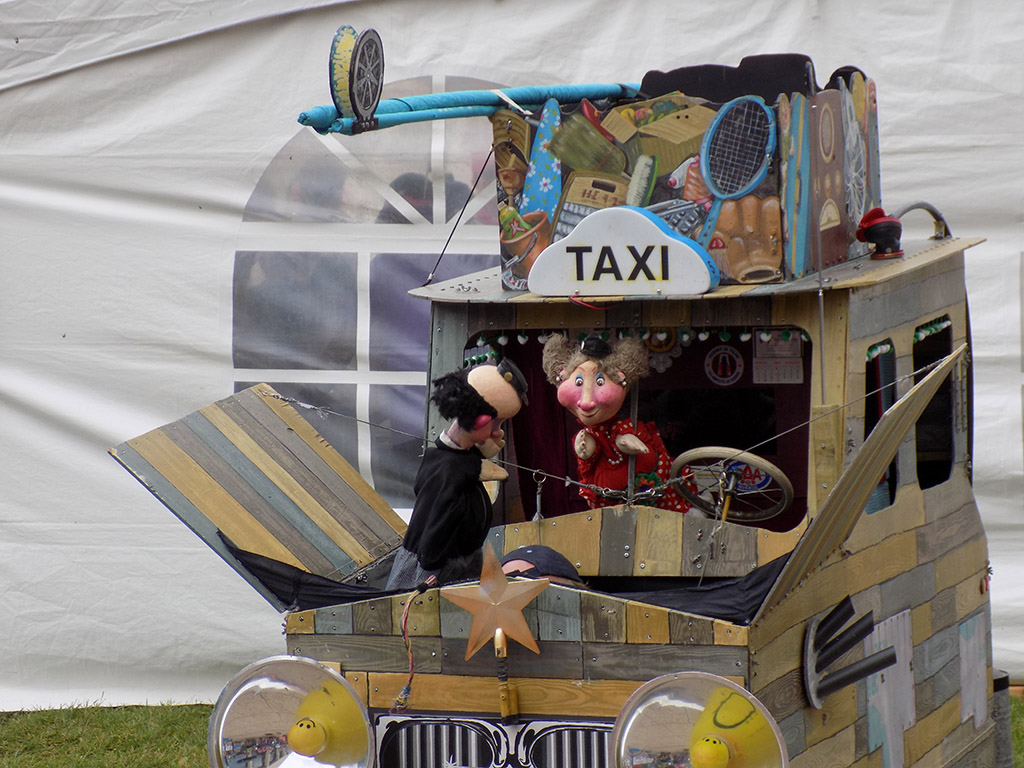 A puppet show outside the museum caught the attention of all ages. Photo: James Morgan 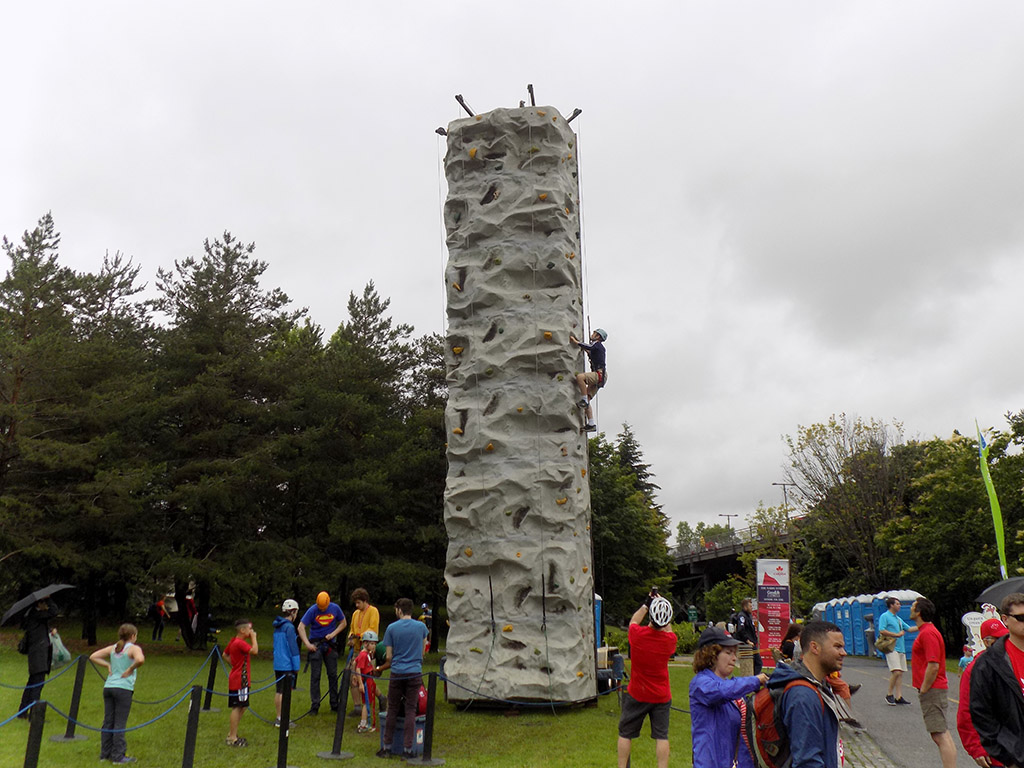 Then, I walked over the Alexandra Bridge to Ottawa. The authorities wisely close the bridge on Canada Day. City transit buses are allowed on one lane, and the rest is for pedestrians. I made it to Major’s Hill Park behind the Chateau Laurier. It was nearly impossible to make it through because the crowd was so dense. I managed to make it through and then returned to the bridge and the long walk back to my car. After arriving home, I read online that people were waiting five hours to go through airport-style security to get onto Parliament Hill and that the free city transit buses in Ottawa were running behind or just not showing up at certain stops. 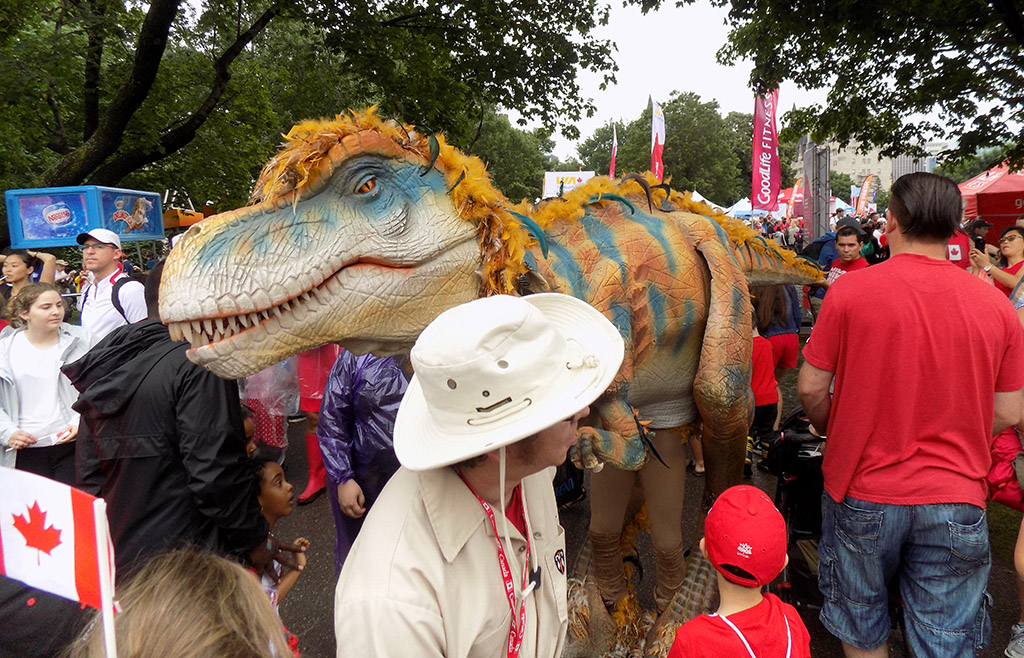 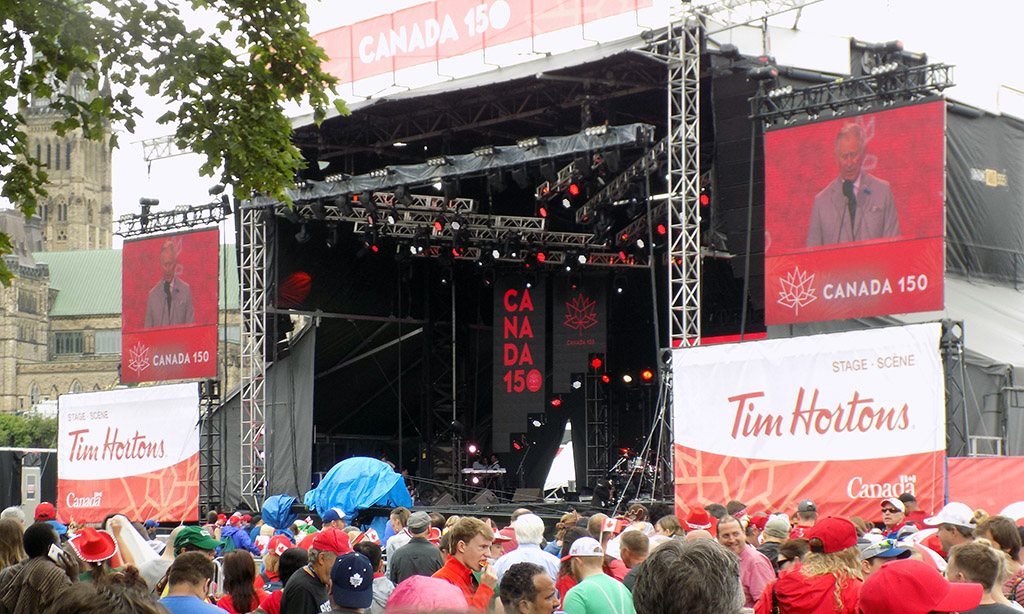 With long lines and security checks to reach Parliament Hill, many people watched the events there on video screens placed throughout the surrounding area instead. Spectators listening to Prince Charles’ speech in Major’s Hill Park. Photo: James Morgan 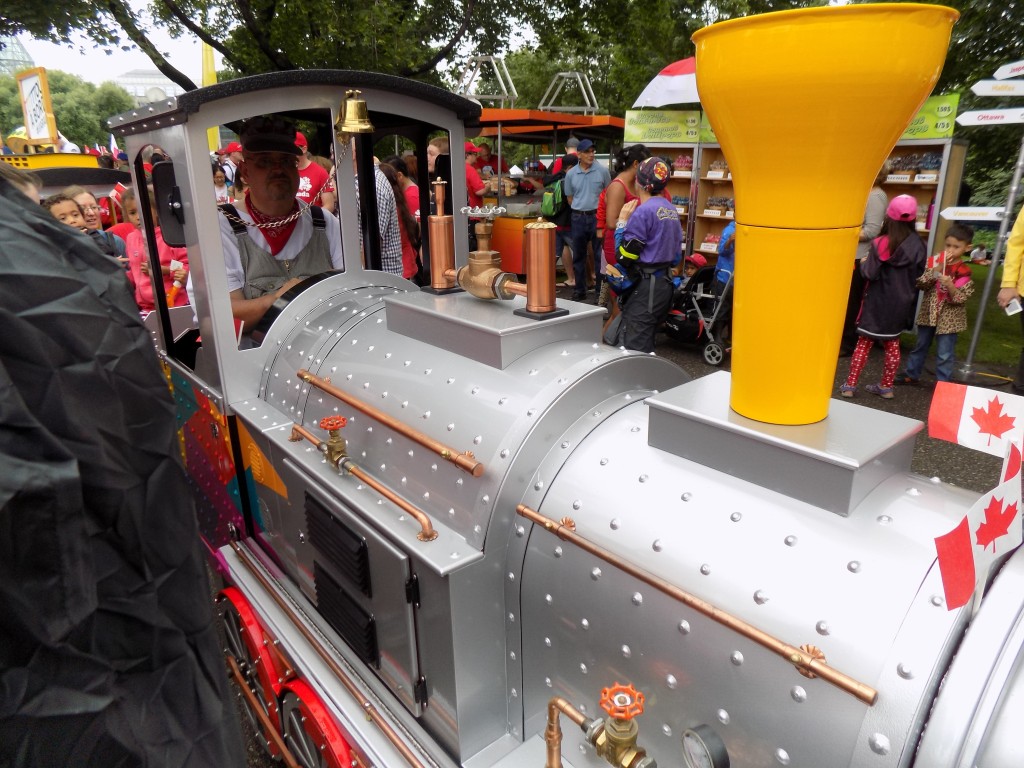 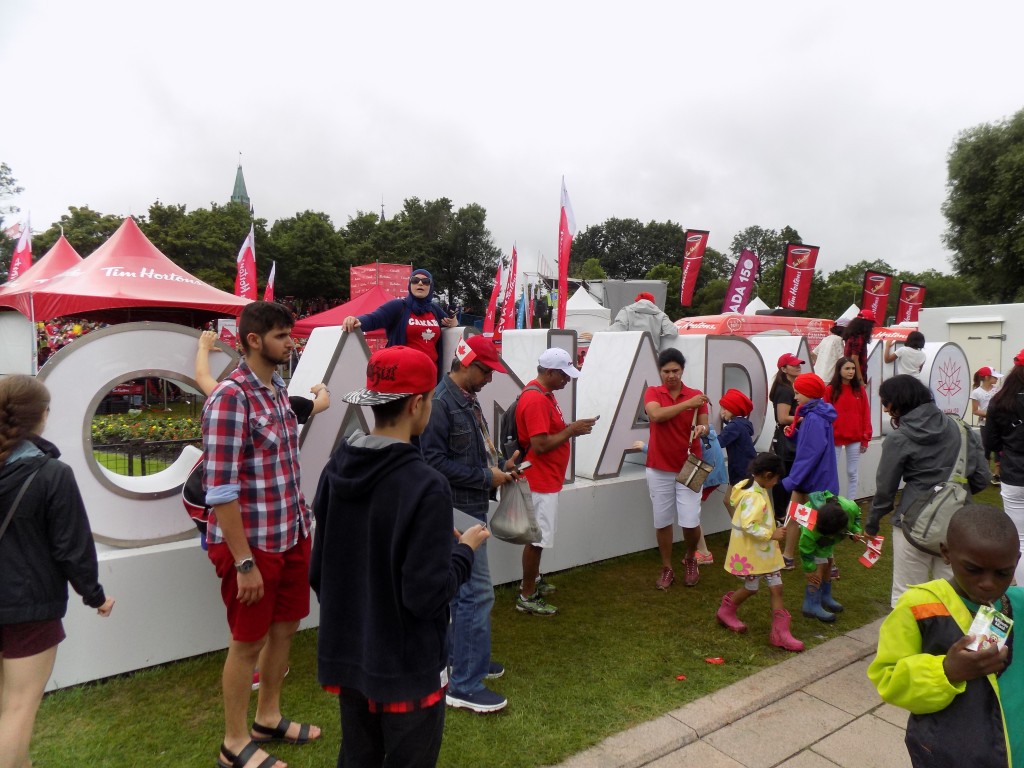 Later in the day, I decided to take in some small-town Canada Day festivities.  Wakefield Quebec, north of Gatineau, is one of my favorite places in the area.  I grew up in small towns.  I like seeing friends, neighbors, and families having fun. Wakefield had a parade earlier in the day, but the evening events were live entertainment, food, and fireworks later on. I felt more at home sitting down with a pulled pork sandwich and a pint of Labatt’s 50 ale while a couple of guys on a stage played accordions and banjos. It was all going really well until the skies got almost twilight dark and a deluge of rain streamed down, turning much of the lawn to mud. The musicians gave up, quit playing, and enclosed the stage with a tarp.  With no sign of better weather, I headed home. 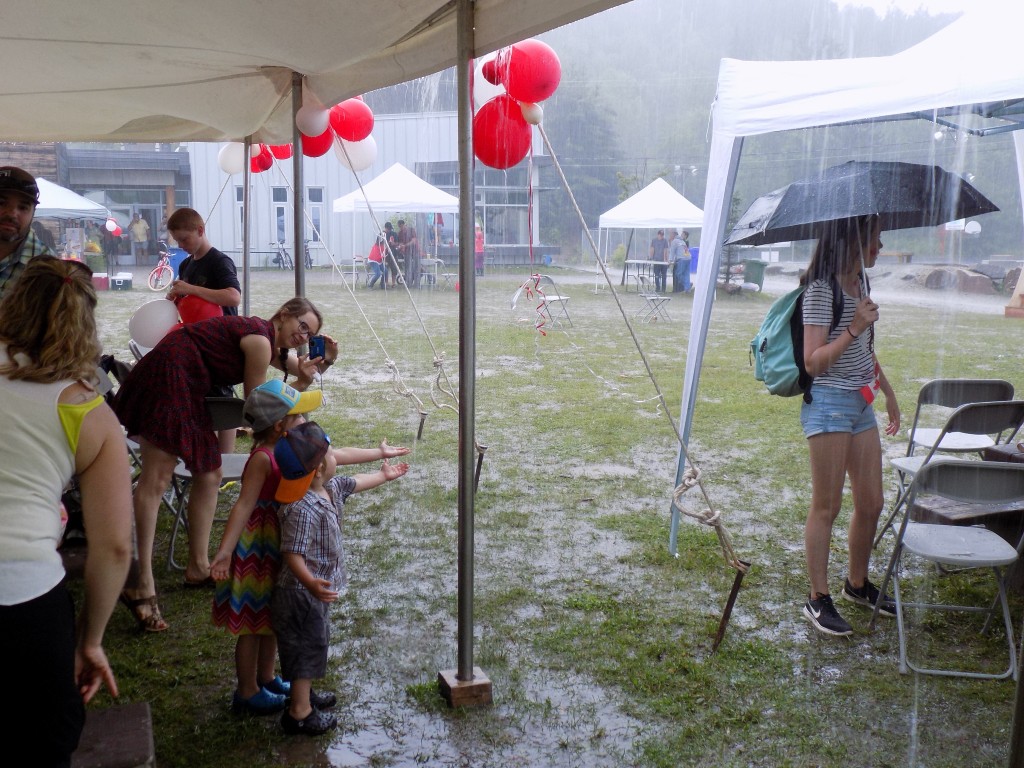 Things got awfully wet in Wakefield. These children had fun though. Photo: James Morgan