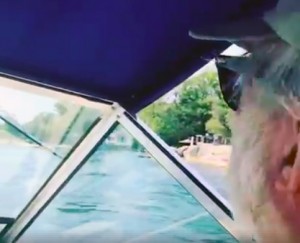 On Monday while Brian Mann was soldiering up the heights of Mount Marcy with eclipse glasses and sound kit, others from the station were embarking from Morristown aboard Radio Bob’s leisure research vessel Little Queenie to experience the eclipse from the downstream end of the Thousand Islands. Here is a poetical postcard.

Having basked enough for now
I walk off into pine shadow, leaving
the boys to snorkel around the boat.
At a picnic table the others swap
turns peering into a small hand-held
device made from a box of Raisin Bran
and other common household products
while the moon bites into the sun.

The dimming light has gone strange,
like the golden hour, David says, but not.

At the upstream end of Sparrow Island
the anchor of the Lillie Parsons trails
its chain into dancing water.
Standing there, I imagine the squall,
the chancy currents where she grounded
in 1877, imagine the chain leading 65 feet
below to where her 500 tons of coal
strew like dark stars across the bottom.

I view an image of the eaten sun
through a lattice of my fingers;
through the lattice of the past,
I see the schooner break its bones
upon the rocks. Until upstream
a laker sounds five blasts, dispelling
reverie, eclipsing this pinhole
view through space and time.