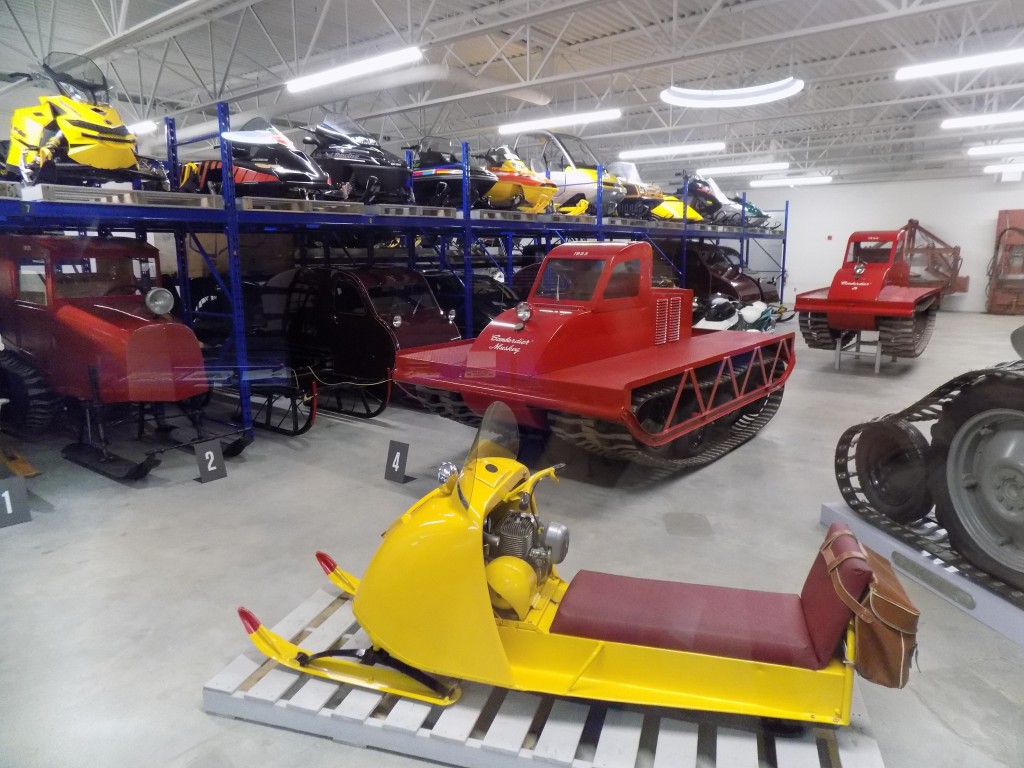 Some of the past models of Bombardier-made snowmobiles on display at the Joseph-Armand Bombardier Museum of Ingenuity in Valcourt, Quebec. Photo: James Morgan

As Canadians or North Country residents, even those of us who don’t own a snowmobile know someone who does, and we’ve probably taken a ride on one at some point. There’s more to the snowmobile’s inventor, Joseph-Armand Bombardier (1907-1964) and the company he created though. A visit to the Joseph-Armand Bombardier Museum of Ingenuity in the inventor’s hometown of Valcourt, Quebec, proved this. 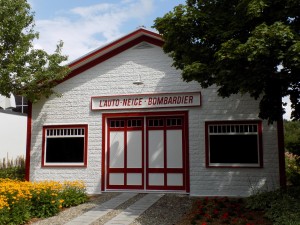 Bombardier displayed a natural mechanical ingenuity at an early age in Valcourt, located in the Eastern Townships region east of Montreal. He was building his own mechanical toys and small machines when he was in his early teens. At 14, he built a small cannon and restored a Model T Ford that his father thought was beyond repair. As the oldest son, his parents expected him to follow the old Quebec tradition of becoming a priest and sent him for higher education at a seminary. One year during Christmas holidays, Joseph-Armand built his first snow vehicle out of a Ford engine, two sleds, and used ropes for steering. When he was 17, his father let him leave the seminary. He moved to Montreal, took some mechanics courses and learned English. 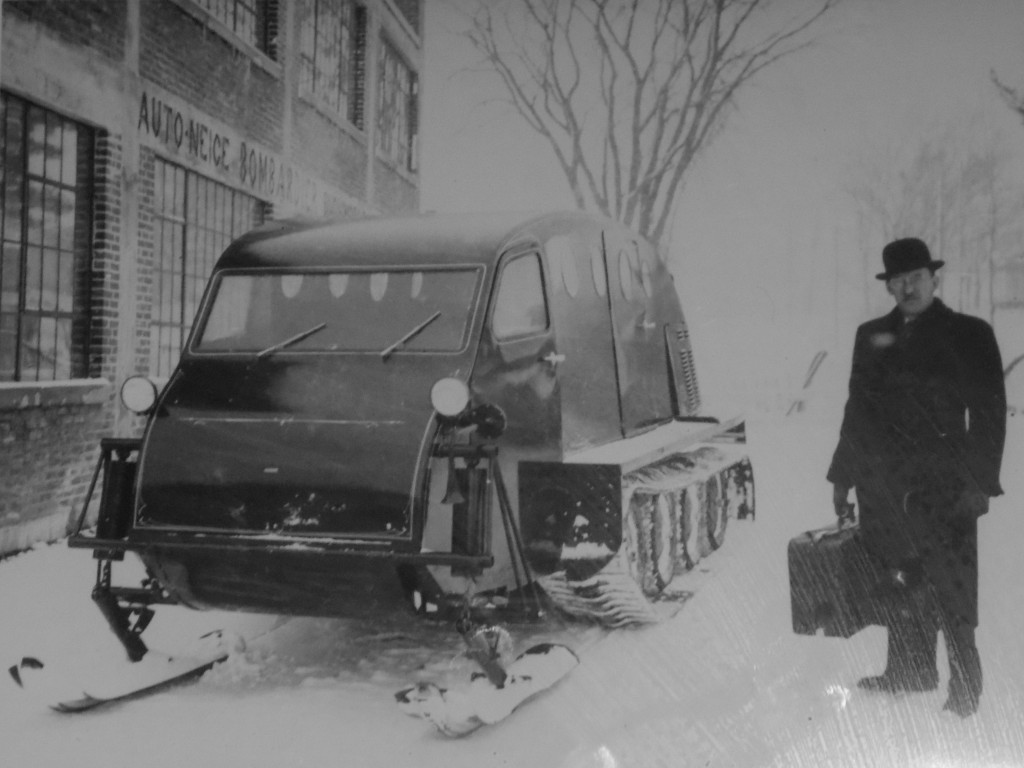 Bombardier returned to Valcourt in 1926 and opened a garage. He repaired, built and rebuilt just about anything mechanical in addition to running a service station.

A personal stake in winter transportation

Small-town Quebec during the winter was an isolated place in the 1920s and 1930s. Highways weren’t maintained like they are today. Bombardier tried to figure out how winter travel could be easier. He started experimenting again with adapting an automobile to travel on skis over the snow. It was difficult though to find the right weight and suspension.

In winter 1934, Bombardier’s two-year-old son Yvon died of peritonitis because poor road conditions made it impossible to travel to the nearest hospital. The loss of his son made Joseph-Armand work even harder to develop a reliable snow vehicle. In 1936, he developed a sprocket wheel and track system, along with two skis to create the first self-propelled motorized snow vehicle. It was patented under Canadian law that year.

Bombardier started showing off his new vehicle in communities across Quebec. He would drive the otherwise impassable winter roads into towns and park in front of the newspaper office to get the attention of editors. Back in Valcourt, the garage evolved into a factory, turning out the big B-series vehicles. 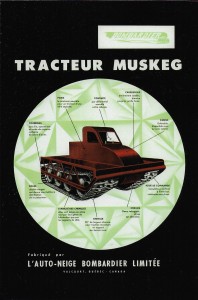 World War II was a huge boost for Bombardier. The company made 1900 tracked snow vehicles for the Canadian Army. After the war ended, many of the big military vehicle models were adapted for the civilian market, including logging, farming, and police work in remote areas.  The most notable was the Muskeg Tractor, which is still in production today. Bombardier also developed a school snowmobile was also sold to authorities in Quebec and Ontario to get kids to class more easily in the winter. Bombardier also developed a new, patented process for vulcanizing rubber to metal for manufacturing the tracks for the vehicles. 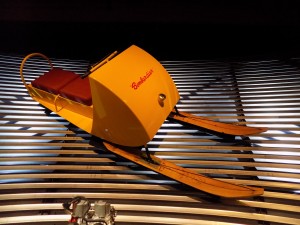 A 1959 personal snowmobile before the Skidoo brand was adopted. Yellow became the color associated with Bombardier’s recreational machines.  Wooden skis with no windshield and no headlight either!  The chrome cap on the front is the gas cap.  Photo: James Morgan

The post-war years saw more people having time and money for outdoor recreation. Sales of the big vehicles had levelled off by the late 1950s so Bombardier started working on a personal-sized snowmobile. The prototype was developed in 1958. Joseph-Armand took it to northern Ontario when he visited a friend who served as a priest there. The indigenous people enjoyed it and spent three days taking turns driving it around the community. Bombardier left the first personal snowmobile to his friend as a gift. He knew he had a market. 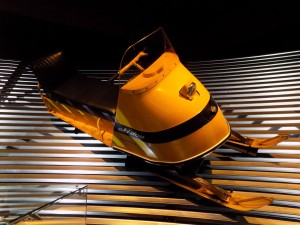 A Skidoo Olympique from the 1960s.  These models were a big part of the recreational snowmobiling boom in those years.  Photo: James Morgan

The rise of the Skidoo

These small snowmobiles became the popular Skidoo brand by accident. The name was supposed to be Ski Dog, but there was an error in the first sales brochure! During the snowmobiling craze of the 1960s and 1970s, competitors like Polaris and Arctic cat started up in the U.S. John Deere and Massey Ferguson sold their own models at farm equipment dealerships. In Quebec, other brands included Moto Ski and Dauphin. Originally made in Grand-Mere Quebec, Dauphin moved to Malone, New York after being taken over by Dufrane Motors. That company also made the Manhandler snowmobile for JC Penney.  Moto-Ski was taken over by Bombardier. 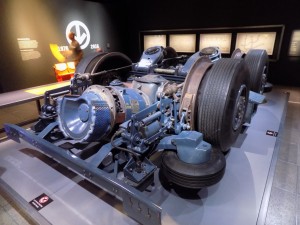 A Bombardier-made chassis and wheel assembly for the Montreal Metro subway system. The Metro trains run on on vertically and horizontally placed rubber tires that keep it steady on a concrete track. A steel third rail supplies the electricity. The first Metro trains were made at the former Moto-Ski snowmobile plant in La Pocatiere, Quebec. Photo: James Morgan

Bombardier diversifies after death of founder

Joseph-Armand Bombardier died on February 18, 1964 at age 56.  The innovation continued though. In the 1960s, Bombardier made the first trains for Montreal’s Metro subway system. Bombardier now produces light rail vehicles for customers all over the world and has several manufacturing plants. In the 1980s, it entered the aircraft business, taking over from former manufacturers Canadair and De Havilland.

Today’s Bombardier is two separate companies. The aircraft and rail divisions are a publicly-traded company. It has recently faced controversy for receiving bailout money from the Canadian and Quebec governments. The company that makes Skidoo snowmobiles, Sea Doo jet-skis, and the Can-am line of all-terrain vehicles and three-wheeled motorcycles is called Bombardier Recreational Products or BRP. It’s still controlled by the Bombardier family. Offices and production are still all located in Valcourt, making it pretty much a company town built around the successes of its most notable citizen.