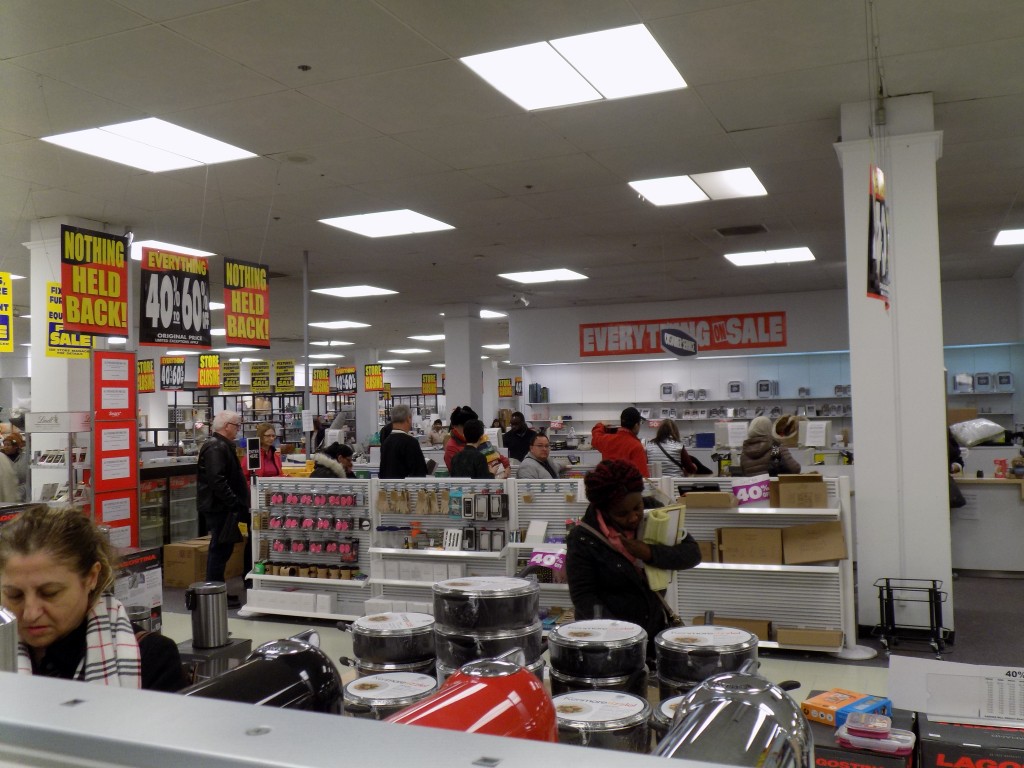 The legend of Black Friday

The Black Friday phenomenon has moved north in recent years, but on a lighter level than in the United States.  When Americans celebrate Thanksgiving, it’s just another Thursday in Canada and the day after is really just another Friday in both countries.  However, the day after Thanksgiving in the US has become the historic beginning of the Christmas shopping season.  It’s also the day where retailers large and small count on turning a profit and showing black rather than red on their balance sheets.  That’s what is supposed to put the black in Black Friday.

What it means to retailers

The Retail Council of Canada is the national organization of retail stores of all sizes.  Michael LeBlanc, who is one of its Consultants said that Black Friday in Canada is more than just a day, it continues through the following weekend into so-called Cyber Monday—the day where retailers offer big sales to encourage shoppers to buy online.  LeBlanc acknowledged that Black Friday is not as big of a deal in Canada because it doesn’t follow a major holiday, but noted that Canada has Boxing Day the day after Christmas on December 26th when stores have major sales while it’s just another day in the US.

Contrary to popular belief, Black Friday is not a day that makes or breaks the yearly earnings of Canadian retailers.  Michael LeBlanc said it creates “holiday shopping momentum” that helps keep customers coming into stores and malls right through until the week after Boxing Day.  LeBlanc added that because US Thanksgiving and Black Friday are just ordinary work days in Canada, the bargain hunters tend to not go shopping until the weekend when they have more time, meaning Black Friday shopping in Canada usually hits its peak on Saturday.

The crowds were not as big as I had expected when I checked out the situation at St. Laurent Shopping Centre in Ottawa on Friday morning.  It was easy to find a parking space and there were no signs of the unruly customers stampeding for sales.  Sears Canada is bankrupt and in the process of liquidating merchandise and closing all of its stores.  The St. Laurent Sears was among the more crowded places in the mall.  Orderly Canadians rooted through clothes, kitchen products, toys, and trying to find good deals on a Kenmore washing machine or Craftsman snowblower.  I talked with a couple who were excited to have found Christmas toys for their grandchildren at almost half the regular price.  I took a more cynical approach, especially after reading that Sears Canada is under federal investigation for allegedly marking up prices on purpose, before they began their liquidation sale.  I looked around and thought the store had that trampled and picked-over look in many places.  I couldn’t find socks, and thermal undershirts were nowhere to be seen.  I ended up buying the latter at the nearby Hudson’s Bay department store where there was only a modest 25% discount.  It covered Ontario’s 13% sales tax and another 12% of my purchase.

As I walked through the busy mall, I noticed many people carrying two or three large bags containing their Black Friday finds.  But, it seemed like a lot of people were just looking—or tolerating being in the mall while they waited for family and friends who were far more obsessed with shopping.  Clusters of benches and chairs were full of people texting.  Santa Claus had not yet arrived for work at his magical throne in the mall’s centre court, but there was a lineup of waiting children and parents while a lonely looking DJ from a local country station did a live remote nearby.  The smaller stores, the kind that sell trendier fashions worn by stylish sales staff, did not look as busy. 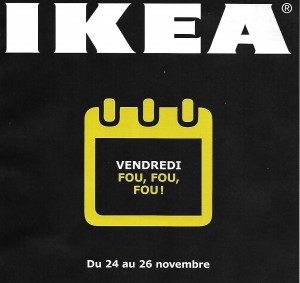 IKEA was offering a Crazy, Crazy, Crazy Friday for Quebec customers who decided to go to its Ottawa store. Scan of IKEA advertisement delivered to author’s home.

Black Friday has a bilingual dimension too.  In Quebec, the official name as approved by the province’s Office québécoise de la langue française is vendredi fou, which literally means “crazy Friday”—a very appropriate name indeed.  Auto parts and hardware chain Canadian Tire got a head start with their sale a day earlier and called it jeudi rouge, or “Red Thursday.”  Ironically, they were not offering extra discounts on tires.

Black Friday in Canada is a more modest imitation of the American version.  Overall, it’s a marketing effort designed to get people to spend money while thinking they are saving it and get the public in the mood for the whole holiday shopping season.