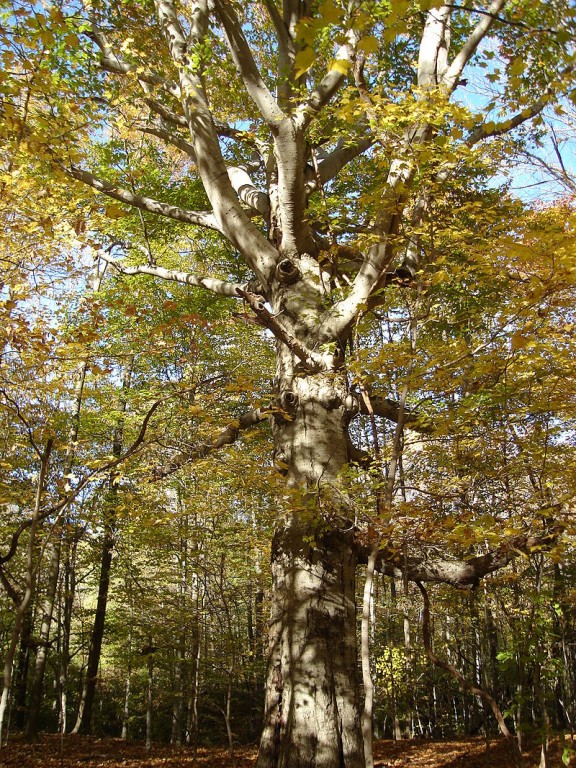 The sturdy, long-lived and stately American beech, Fagus grandifolia, has been slowly dying out since 1920, when a tiny European insect pest was accidentally released on our shores. Because of this lethal but unhurried tragedy, many forest tracts across the Northeast are being choked out by too many beech trees.

That’s right, beech decline has led to a proliferation of beech so extreme that in some places it is a threat to the health of future forests. This qualifies as an oxymoron, I’m pretty sure. The ultimate cause of this weird situation is the aforementioned pest, but the proximate cause is a bad case of hormones being out of whack.

Before making sense of all that, some background is in order. Beech is in the oak family, or you could say oaks (chestnuts, too) are in the beech family, Fagaceae. Historically, it was a dominant species in many climax, or long-term stable, forest communities in eastern North America. From mice to black bears, a host of wildlife used to depend—and to an extent still do—on the seeds of beech, a protein-rich, a three-angled nut enclosed in a prickly case.

The long road to hormone imbalances and oxymorons began nearly a hundred years ago in Nova Scotia with the introduction of beech scale insects from Europe. These soft-bodied pests range in size from 0.5 to 1 mm, or in non-metric terms, crazy-small to wicked-small. It is impressive and horrifying how a microbe billions of times smaller than we are can lay us low in a hurry, or even kill us. Similarly, a tiny pest like hemlock adelgid or beech scale can bring down a tree a million times bigger just by inviting some family over.

The beech scale insect cannot fly, or even walk much, and is not much to look at. But when the wind or a bird brings it in contact with a beech trunk, it inserts its sharp, thin stylet into the phloem tissue, and takes a wee sip of tree juice. This does not sound like a big problem. And it might not be, were it not for certain fungi in the genus Nectria. 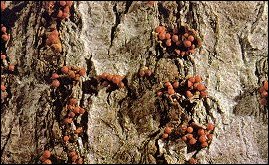 The double whammy comes when the Nectria fungus piles on. Photo: USDA

Decay fungi are critical to the formation of healthy soils, and they typically behave themselves. But when Nectria finds a bevy of beech scale insects drilling tiny holes everywhere, the temptation is too great. It takes advantage of the myriad wounds to invade the phloem, the juicy part of a tree, resulting in a small dead spot called a canker. As these cankers spread over large portions of the trunk, the tree declines and dies.

For protection, beech scale insects cover themselves with a white, woolly substance. The presence of white fuzz and/ or rough, slightly sunken cankers on a trunk are signs of the beech-busting epidemic, often called beech bark disease (BBD). Fortunately, about 1% of beech trees are naturally resistant to BBD.

The reason for beech’s “boom” has to do with how it makes babies. Seedlings can sprout from its nuts, of course, but it can also clone itself by sending up root-sprout saplings. Trees which hold a dominant place in the canopy constantly put out growth inhibitor hormones to put the brakes on mass-production of beech babies. It does not want too much competition while it is in charge. 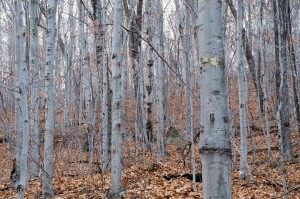 But when a mature tree bites the dust, whether cut by loggers or killed by Nectria-Canker-Beech-Scale-Yuck Complex, there is no longer any hormone control, and you have Beech Gone Wild. Given that a tree’s root zone is 3x its branch length, every mature beech that dies results in a broad and populous mini-forest.

Dense beech thickets inhibit regeneration of other tree species. Yes, those sprouts are doomed eventually, but not before they shade out everything else. To foresters, anything that interferes with natural tree regeneration is a big concern. Hunters hate beech thickets because they obstruct view, especially when beech hold their leaves through the winter. And they make it hard for maple producers to run tubing, or even just get through the woods.

There are ways to manage excess beech, though. Peter Smallidge, NYS Extension Forester and Director of Cornell’s Arnot Teaching and Research Forest, has researched and written extensively on the topic. His articles can be found at http://cornellforestconnect.ning.com or you can contact your local Cornell Cooperative Extension office for information.

1 Comment on “Beech gone wild: how a blight launches a boom”